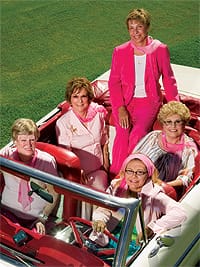 The national average for women mayors among cities with populations over 30,000 is 15.7 percent, according to the Center for American Women and Politics at Rutgers University. Here, women outnumber men in the top municipal spot.

Mary Roche, mayor of Indian Wells, says that’s merely a matter of circumstance. “I look at the number of elected women in local government in the Coachella Valley,” she says. “There are nine cities and 45 positions, and there are only eight elected women in the entire cadre, less than the national average.” Roche points out that three of the five women mayors live in cities with rotating councils; only two were elected to the office. However — rotating shmotating — she acknowledges that “this year does stand out.”

Jean Benson, serving her fifth term as mayor of Palm Desert, notes the high concentration of women involved in community affairs. “We really have a concentration of nonprofits here that women can get involved in, and they do; and then they interact with government agencies. Their overall confidence has been increased, and they go for higher office.”

Indio Mayor Lupe Ramos Watson seconds that notion. “The Coachella Valley has so many organizations that are led by women, and this fosters the environment for cities’ future leaders,” she says.

All five mayors — the others being Yvonne Parks of Desert Hot Springs, and Kathy DeRosa of Cathedral City (whose first mayor was a woman: Pat Murphy) — agree that their leadership styles share a common denominator: a teamwork approach.

“We all have no personal agendas,” Parks says. “We are only in the position to help our city be the best that it can be.”

“We work as team players in trying to build consensus,” Benson says.

“We tend to be more collaborative than our male counterparts,” Roche says.

“We listen with a different ear, and I think we all work to be very inclusive,” DeRosa says. “[Women] tend to be consensus builders.”

“We are consensus builders,” Ramos Watson echoes. “We want to find solutions; we want to move forward, and that’s the main objective.”

Most of them share another opinion: that the time has come for a woman president — if not necessarily Hillary Clinton.

“I am excited about the possibility that there could be a woman leader,” Ramos Watson says. “I admire [Clinton] for having the strength to move through this process. It’s not an easy process. It’s still largely dominated by men. … I think she’s an excellent role model for women across the world.”

The prospect of a female Commander in Chief is good “if it’s the right woman,“ Benson says, conjuring up the name of Margaret Thatcher as someone made of the right stuff. “I think until the right one [comes along] who is totally a president for all the people, that won’t happen.”

DeRosa, however, dismisses the idea that gender has a place in politics. “For me, it’s not about having a woman in the White House,” she says. “For me, it’s about the best candidate. I can’t support a candidate because of gender.”

Although their cities differ in size, demographics, and the issues they face, the women mayors enjoy meeting for lunch approximately once a month and comparing notes.

“The one thing that I am a proponent of is if someone else is doing something and it’s working, why not find out what that is and see how it can work for you,” Parks says.

Beyond the sharing of information, the women consider themselves supportive friends. “We certainly have a regard for each other, a respect for each other,” Roche says. “We are happy to pat one another on the back for doing a superb job.”

Ramos Watson says the other women who have been mayors longer (she took office in December 2007) offered to share their experience. “They took me into their world and under their wing and showed me the ropes,” she says. “It’s that maternal instinct.”

All five women mayors will take part in a lunchtime panel at the Women Leaders Forum’s annual leadership conference on Oct. 24. Information: 837-7222. They also will work in tandem as judges of a chef competition on Nov. 6, the opening night of The Art of Food & Wine Palm Desert.