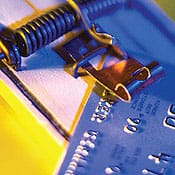 It’s time to pay closer attention to your credit card statements. The Credit Card Reform Act of 2009 holds major changes to the nation’s affinity for plastic. The first phase, which became effective last August, gives cardholders 21 days (up from 14) from the statement mailing date to pay without a late fee. And changes to your account now require 45 days advance notice in writing.

You can no longer just glance at your monthly statement’s balance, recent transactions, and payment due date. Pay attention to details, especially the small print. Failure to do so could cost you. “You need to check your statement to see if anything has changed from month to month, including your interest rate, minimum amount due, and credit limit,” says Leslie McFadden of Bankrate.com. “If something has changed, you can challenge it if you’ve never paid late and have a high credit score.”

A perfect example of McFadden’s advice is a notice I received in mid-November from Citibank: “To continue to provide our customers with access to credit, we have had to adjust our pricing. The terms of your account will be changing.” My interest rate on purchases would rise to a variable 10.99 percent from a fixed 6.99 percent, effective in 45 days — despite an excellent credit record and historic lows in federal interest rates.

“We notified many of our cardholders that we’re increasing their consumer credit card interest rates up to 3 percent, effective Nov. 30, due to the business environment,” says Amy Savicky of Wells Fargo. “We took this action in order to continue offering our credit card products to the greatest number of customers possible and keep credit flowing.”

Will consumers benefit from the new legislation, or will credit card companies slither through Beltway loopholes?

“You must understand any offers you receive, because people in these companies are very good at marketing services and tricking consumers into deals that they didn’t expect to have,” says Howard Dvorkin, founder of Consolidated Credit Counseling Services Inc. and past president of the Association of Independent Consumer Credit Counseling Agencies. “[The new law] will make it harder for the credit companies; but at the end of the day, they need to make money and will find ways to do that.”

“This will end credit card tricks and traps for consumers, because now issuers can’t trick people into incurring more debt due to a huge reliance on penalty rates and late fees,” says Lauren Bowne, a staff attorney for Consumers Union, the publisher of Consumer Reports. Those big income producers have been slashed in the bill, much to the credit card industry’s dismay. “Billing documents are long, and most people have trouble reading them,” she says. “One of the bill’s best features is it assures consumers that their quoted interest rate won’t change after they occur debt unless they are 60 days late paying. Consumers are really going to feel that immediately.”

According to Bowne, the legislation:

■ Stops credit card issuers from raising interest rates in the first year after a credit card account is opened, except in the following circumstances: (1) when the increase is under a variable interest rate; (2) at the end of the promised time period for a promotional rate (for example, the issuer can offer 3 percent for six months and then 12 percent after that; the promotional period must be at least six months; (3) if the required minimum payment is not received within 60 days after the due date.

■ Lengthens the notification time for rate increases on future purchases. After the first year a card is opened, the card issuer can raise the rate on a fixed-rate card’s future purchases with 45 days notice.

One loophole consumers should note is that the advance notice requirement does not apply to credit limit reductions.

According to Dvorkin, five years ago, 80 percent of credit cards had fixed interest rates. That’s not so today. “Between May, when the act became law, and its February implementation, banks have been changing many fixed-rate cards to variable rates (which are linked to prime) to get around the one-year/45-day rule. That’s very dangerous for consumers.”

Adam Levin, chairman and co-founder of Credit.com and former director of the New Jersey Division of Consumer Affairs, says, “The basic purpose here is to bring greater transparency and fairness to the credit card system and industry. The important thing is to look at credit cards as part of your credit portfolio with you as the manager. A lack of financial

literacy is one reason we are in big economic trouble right now.”

Levin advises consumers to rotate their credit cards by using one for a few months and paying it off or running a small balance. Then use another card the same way. According to Levin, closing accounts can be a black mark on your credit profile. It can affect your FICO score and reduce your available amount of credit. “Basically you always want as much credit available as possible without looking like a credit card junkie,” Levin explains.