Richard J. Lewis of CSI makes his move from television to the big screen 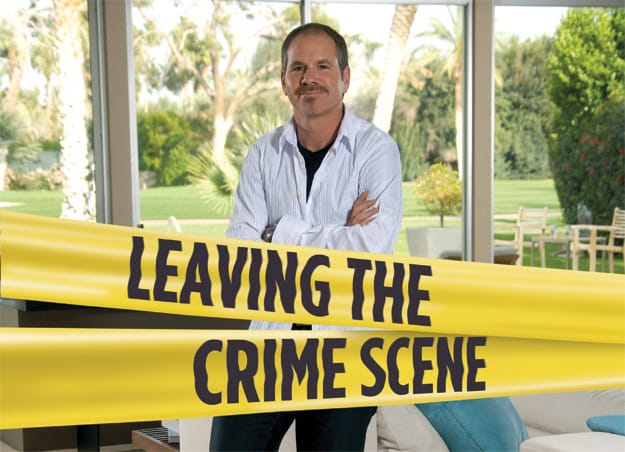 Late one evening, a police officer pushes past yellow crime-scene tape in the parking lot of a sleazy motel. He stoops to examine the body of a dead young woman. “I knew her,” he says. A close-up reveals the face of teen idol Taylor Swift, making her CSI: Crime Scene Investigation television debut. The officer is actor George Eads, and the director is Richard J. Lewis.

“I told my agent that I saw the CSI pilot and thought it was killer,” Lewis recalls. “I said, ‘We’ve got to get this show.’ I was hired to direct the fourth episode of CSI. Then I got a call to direct another episode that season, which was quite an honor. In the second season, they gave me six episodes to direct and I became an in-house director. On the third season, I became a producer and I started writing some episodes. By the time the fifth or sixth season came along, I was the executive producer.”

Over the last nine years, Lewis has produced 49 and directed 45 episodes of the hit series. Seated in his modernist house at Tamarisk Country Club in Rancho Mirage, he says, “For the last year, I’ve been commuting from here to Universal City in Los Angeles, which can be a huge pain. But Palm Springs is a laid-back, nonjudgmental place where you can get away from the rat race and be who you are.”

CSI has enjoyed a nine-year run, spinning off two more series: CSI: New York and CSI: Miami. All three are still in production — a fact that does not surprise Lewis.

“I think there is a fascination with death and the way the series shows death in a close-up, ultra frenetic manner. It captures the zeitgeist — where we are today. We feel so vulnerable. People are interested in escapist entertainment, which allows them to see other people’s deaths in a voyeuristic manner. We live in an era in which death is not taboo, and that’s ironic. The amount of violence on network television is abhorrent. Sex is taboo, but death and violence are not.”

Lewis himself, however, has had a fascination with death from the time he was a kid. “I read Edgar Allen Poe and stories about vampires — stories of life after death,” he says. Those stories were always perplexing to me. By the time I got to college, I started reading all the modern philosophers and Freud and Jung to try and understand death and taboos.”

His personal journey of self-discovery began when he was an undergraduate at Northwestern University in Illinois. Today he is a writer, director, producer, and father of a 9-year-old daughter. Although Jewish by birth, he attends retreats at the Buddhist Zen Mountain Center in a remote corner of the San Jacinto Mountains. He summarizes his bi-spiritual leanings with an epithet of his own creation: “I’m a JewBu.”

Lewis is the most un-Hollywood of producer/directors. He drives a Toyota Camry hybrid, does not pick up his cell phone in social settings, and refuses to attend Hollywood parties. He also does not watch television. For this native of Toronto, Canada, the path to career success began with tennis.

“I went to Northwestern on a tennis scholarship. I actually got over tennis when I was 16, but I kept my ranking to get a scholarship. Then I got kicked off the Northwestern team my junior year for sex, drugs, and rock ’n’ roll. I had the theater bug, and I didn’t want to play tennis anymore. I was acting and directing. I had a radio show. I was in a rock band. There were so many things to do. Now I go back to Chicago every year, where I’m on the dean’s National Advisory Council, and I teach directing and acting.”

After Northwestern, Lewis worked as an actor and director in Chicago, went to Paris, where he worked as a gofer for a magazine, then dallied as a ski bum in the Alps. These interludes provided a respite before he enrolled in graduate film school at the University of Southern California.

“I knew I was headed for a career in entertainment, but I needed to study other things as well — literature, philosophy, and theater. Once out of USC film school, I scrounged up work directing bad videos, the kind you see when you do karaoke. I hustled any work I could. I taught acting classes for about 12 students, who would pay me $100 a month. I optioned scripts and got a lot of things for free. Then in 1989, I got my first professional gig on the remake of the old Alfred Hitchcock Presents television series. I directed two episodes.

“Elizabeth Ashley was in one of them. She was the first real star I directed and very vain. I was petrified. Elizabeth Ashley fell into the category of the beautiful actress who had smoked too many cigarettes and wasn’t so beautiful anymore. She only wanted to be photographed from one side. I couldn’t block both sides at the time, much less limit myself to one.

“On the first day of shooting, we’re working in an alley at night. It’s dark and smoky and I say, ‘Where is Miss Ashley? Let’s bring her out from her trailer.’ One of the assistants tells me, ‘She’s not here. She’s at the bar.’

“I was so naïve. I say, ‘I didn’t know we had a bar on set. How cool.’ Then he clarifies, ‘No, she took a cab to a bar.’ Elizabeth Ashley is getting plastered in a bar. She comes back and says, ‘Oh, here’s my wunderkind.’ For the most part, she was pretty good — once she figured out I knew what I was doing.”

Immediately after the Hitchcock assignment, Lewis stumbled into what would turn out to be the most important job of his early career: directing 11 episodes of the Saturday morning children’s show The Adventures of Superboy, over a period of two years.

“It taught me how to make something out of nothing,” he explains, “because we had no budget, no acting, and no writing. But there were four directors I know who ended up with huge careers from that show.”

A 30-minute promotional spot Lewis directed for BC Hydro (the British Columbia electric utility company) brought him to the attention of a producer who hired him to direct a TV series about Native Canadians. This, in turn, led Lewis to his first feature film, Whale Music (1994), which was an adaptation of a novel loosely based on the life of the Beach Boys’ Brian Wilson. Lewis not only directed, but also co-wrote the screenplay. The Canadian film was a critical but not a commercial success. In 1997, Lewis directed an episode of the Canadian television series Due South, created by Paul Haggis (the writer/director of Crash).

“Paul basically brought me back to Los Angeles, and I started directing all this high-end television that was really good artistically but no one wanted to see. But I got the attention of [CBS executive] Nina Tassler, who told the producers of CSI they should use me. William Petersen [the original star of CSI] had also seen Whale Music and was a fan of the film.

The end of Lewis’ CSI contract with the 2008-2009 TV season worked seamlessly with another of his projects: His second feature film has received a green light from producer Robert Lantos of Serendipity Point Films (Eastern Promises, Being Julia). Ten years ago, Lewis read Mordecai Richler’s final novel, Barney’s Version, and knew he wanted to make the film. He will direct his own adaptation of the novel (co-written with Michael Konyves) for Serendipity beginning this month.

Paul Giamatti stars as Barney Penofsky, a Jewish misanthrope from Montreal who, at 68, looks back over his life with particular attention to his trial for the murder of his best friend 30 years earlier. But since Barney is in the early stages of Alzheimer’s, the audience must derive truth from a memory that may be self-serving or simply impaired. Dustin Hoffman plays Barney’s father, Izzy; and Minnie Driver plays Barney’s supremely annoying second wife.

Principal photography on this $25 million production will take place in Montreal and Rome. But when Lewis departs for location shooting, he will take someone from the desert with him — the same someone who led him to forsake his Santa Monica home and commute to the set of CSI.

“I met Emily Christie [former assistant curator at Palm Springs Art Museum] through my cousin Sara Wilson, who writes for LA Magazine. They went to college together. Emily and I started dating, and it has been a big life change for me,” he says. “Now she is coming to Montreal with me to make the movie. The people at the museum are all angry I’ve stolen her away from them.”

Lewis appears to be reinventing himself — both personally and professionally. On June 19, he married Emily; and he is success-fully transitioning from serial television producer/director to writer/director of a major motion picture.

“CSI is also more cinematic than most television, and I’ve worked with a lot of great actors,” he says. “Now I’m heading to Montreal and Rome with Emily by my side.

It doesn’t get much better than that.”