What Are Cannabis Regulations in Greater Palm Springs 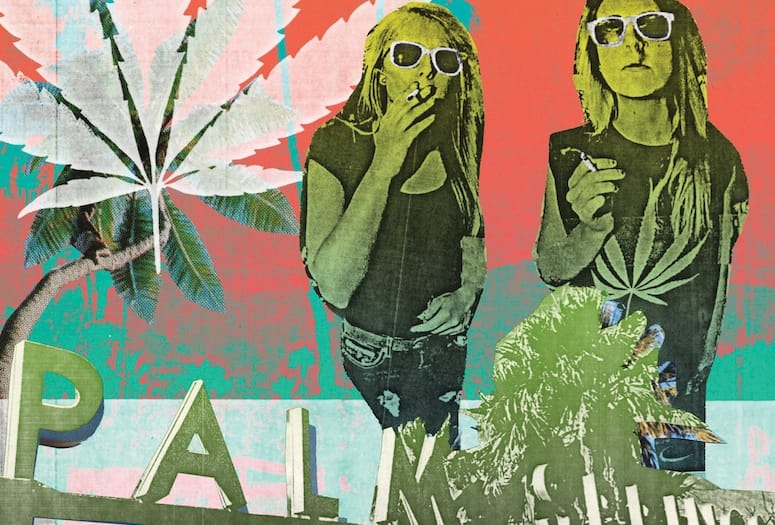 The cities of Greater Palm Springs have enacted a jumbled patchwork of cannabis regulations since medical marijuana became legal 21 years ago. Progressive Palm Springs has historically supported access to medical marijuana, while others dug their heels in with all-out bans on dispensaries very early in the game. Now, with the passage of the Proposition 64 Adult Use of Marijuana Act, the difference in attitudes among the cities of the valley has never been more pronounced. Cities like Desert Hot Springs and Coachella are permitting massive cultivation operations, looking to cash in on the green rush.

But what does that mean for the consumer?

At this moment, Californians can carry up to an ounce of weed when out and about, but still can’t smoke in public. Driving under the influence is still driving under the influence, which is still illegal. Any Californian can now grow six plants for personal use, though some cities have gone to great lengths to make this less than appealing (talking to you, Indian Wells). It’s legal to possess as much weed as you grow, but anything over an ounce must be kept in a locked space and out of public view.

You can “gift” up to an ounce to any friends over 21, but until retail sales of recreational cannabis begin in 2018 you’ll still need a medical recommendation to make a purchase. Currently, only Palm Springs, Cathedral City, and Desert Hot Springs allow sales of medical marijuana. All three allow for cultivation, as does Coachella. But while Coachella allows for large-scale cultivation and manufacturing, you’ll need to buy your medical pot elsewhere.

In the afterglow of voters’ overwhelming approval of Prop 64 last November, the situation still remains fairly fluid. There have already been dozens of changes to California cannabis regulations, and more are expected before and after the clock strikes 2018.

Palm Springs has been leading the valley’s move toward cannabis acceptance since it was legalized for medical use 21 years ago. With the opening of Joy of Life Wellness Center, the city has reached its current limit of six dispensaries. The city council has taken measured steps in implementation to prevent oversaturation of the local market. The city has allowed those with medical recommendations to grow 12 plants per patient, with a maximum of 24 plants per household. This same policy was approved for all of Riverside County in 2016. 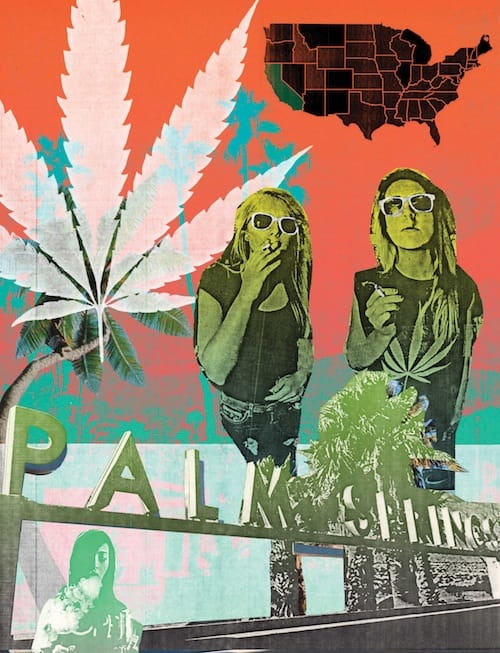 After a somewhat late entry, Cathedral City has made up for lost time. There are currently 11 licensed dispensaries in the city. Now the city appears to be reining in retail saturation and recently implemented a six-month moratorium on new dispensaries.

While they’re pumping the brakes on new retail shops for now, Cat City is all-in with commercial cultivation. In April, it lowered cultivation tax from the voter-approved maximum of $25 to $15 per square foot. The city’s Cannabis Task Force reviewed the viability of the tax rate and recommended the cut in order to help local cultivators remain competitive. The reduced rate shouldn’t hurt revenues; in fact, the city recently granted 18 permits for a 20-acre cultivation campus expected to produce 90 tons of flower per year.

Like many California cities, Palm Desert passed an all-out ban in early 2016, under the false assumption that it would lose the ability to do so if a ban was not enacted by March 1, 2016. The deadline had been mistakenly left in a draft of a state bill and was later corrected. This led to some temporary confusion among local governments, thinking they would lose control of their cannabis destiny. At the time, city council members stated their intention to revisit delivery once the smoke cleared.

The city has since reversed its stance on delivery services from licensed dispensaries outside Palm Desert in response to pressure from residents. The ban on dispensaries and cultivation remains in place. However, in August the city began talks of lifting the ban and welcoming dispensaries and research facilities within city limits, including locations near the high-end retail district of El Paseo.

Following the lead of Desert Hot Springs, Coachella reversed its oppositional position on cannabis in January of last year, opening the door for large-scale cannabis cultivation and manufacturing in part of the city formerly zoned exclusively for auto-wrecking yards. Southern California–based Del-Gro Inc. broke ground on its facility in February of this year.

While the city is wildly in favor of the tax revenue cultivation and manufacturing will bring, retail bud business remains prohibited. The city council is currently reviewing this position and may allow dispensary and delivery licensing in the near future. You can still grow your own, though. Six plants for recreational smokers, and 12 for patients.

Highest price for an eighth  in the Coachella Valley.

Average price of a top-shelf eighth.

Percentage of Californians who have smoked pot in the last year. (According to a 2016 study by the Substance Abuse and Mental Health Services Administration.)

Approximate number of Coachella Valley tokers who buy through a licensed dispensary.

California was the first state to  ratify medical marijuana in 1996, with 56 percent voter approval of Proposition 215 and the Compassionate Use Act.  It would be two years before any other state followed suit.

Cannabis policy in Indian Wells can be summed up in three words: No! No! No!

With the passage of Prop 64, the city has doubled down on its distaste for the evil weed by imposing some of the state’s most restrictive regulations on personal cultivation. Residents of Indian Wells who wish to grow their own must pay $141 for a permit and pass a criminal background check. Anyone with a felony drug conviction in the past five years is automatically disqualified. Once the background check is passed, there are still restrictions on where in the house your plants can be grown. On top of that, home growers must be willing to submit to code-enforcement inspections.

While Prop 64 allows cities and counties to “reasonably regulate” this right, many believe the Indian Wells ordinance oversteps, primarily because it creates a registry of growers at a time when cannabis remains prohibited by federal law. A definition-by-lawsuit will be established in time with a recent case filed by the ACLU and the Drug Policy Alliance against the city of Fontana for enacting similar regulations. The outcome of the case will be the first interpretive precedent set for this matter and will undoubtedly have far-reaching — and potentially costly — implications for cities like Indian Wells.

Indian Wells was the first city in the valley to ban all cannabis business and no change is expected. In other words, don’t expect a cannabis bar at the BNP Paribas tennis tournament any time soon.

After Indian Wells, Indio was the second valley city to ban cannabis businesses. Its ban on cultivation and dispensaries remains in place, including delivery service into or out of the city. If you’re a smoker in Indio, you’re growing your own or going for a drive.

The struggling city charged headlong into cannabis in 2014 when voters approved taxation of medical cannabis sales and cultivation. DHS currently has seven licensed dispensaries to serve its 28,000 residents and allows homegrown bud to the extent of state and county limits. But commercial cultivation is the real story here. Desert Hot Springs will soon be home to some of the largest operations on the planet, with plans for up to a million square feet of cultivation in the city. Its future looks brighter than a 1,500-watt grow light.

One of the more conservative areas of the valley, La Quinta has had a ban in place on cultivation and dispensaries since 2007. After extensive research by an ad hoc committee formed in 2015, in March of this year the city council unanimously approved delivery services within the city. Residents can grow their six plants for personal use (12 for patients) as allowed by state law. No permit required. The Gem of the Desert also has a quirky little code that can get you banned from city parks for a year if you’re caught smoking there more than once.

Rancho Mirage has had a long-standing ban on all cannabis businesses. Residents are allowed to grow the six plants allowed by Prop 64, but they must be out of sight. Last year, the city council amended the ban to be more exclusive by removing the word “medical” from the ordinance. Considering the city actually offers a $25-per-month travel subsidy for its residents to buy weed elsewhere, a reimbursement for gas money or an Uber ride, it’s doubtful the ban will be lifted any time soon.

Economics: What about
the other green?

Fiscally speaking, there is no downside for cities that have embraced cannabis businesses, and no potential benefit for those with bans.

Palm Springs raked in $1.4 million in tax revenue last fiscal year from the weed businesses and Cathedral City expects to bring in $1.2 million next fiscal year. These numbers will increase in 2018. Coachella, too, will reap profit when its large-scale cultivation centers begin rolling out the green next year. But the Coachella Valley’s greatest success story is Desert Hot Springs.

Originally known for its namesake mineral springs and associated spas, DHS has experienced serious financial trouble. Fiscal emergencies were declared twice in an eight-month span. Now, some of the largest grow facilities in the world are beginning operation and the city is seeing commercial real estate prices soar following its approval of more than a million square feet of cultivation space. Yearly tax revenue from cannabis businesses is expected to eclipse the city’s current annual budget within just a few years.

The green rush in on for Coachella Valley cities embracing marijuana, and DHS is poised for a bountiful harvest.

Plants allowed for personal use
statewide under Prop 64.

Eight states, plus Washington, D.C., have legalized recreational use, including Alaska, California, Colorado, Maine, Massachusetts, Nevada, Oregon, and Washington. Recreational retail stores will  not open until 2018 in California, Maine, Massachusetts, and Nevada. While nonmedical use is legal in  these eight states, it remains a federal offense and retail operations in  these states are still vulnerable to federal prosecution.

A recent study out of the University  of Massachusetts used a cohort of 5.9 million hospitalized patients age 18 and over to determine the relationship between marijuana use and non-alcoholic fatty liver disease. They found habitual marijuana users were  52 percent less likely (and occasional users 15 percent less likely) to be diagnosed with the disease than nonusers.

Deaths per year attributed to  excessive alcohol use, more than half  of which are due to binge drinking.
(According to the Centers for Disease Control and Prevention.)

Number of years you could be  banned
from parks in La Quinta for smoking
marijuana in them. (Yes, really.)