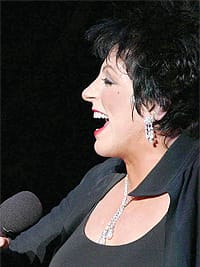 “You’re talking to Dr. Minnelli,” she says in her trademark breezy manner.

Earlier this year, Mercy College in New York City bestowed an honorary doctorate upon the celebrated performer for her charitable activities and a career that has spanned five decades and multiple genres. The honor prompted Minnelli to put her work into perspective.

“I had to think in my own terms of what a doctor does,” she says. “All I know is that a doctor is supposed to make you feel better. And if that’s what being a doctor means, then I think I’ve earned the [doctorate]. If there’s someone in the audience who’s going through a bad time, I can give them just an hour and a half of relief.”

The good doctor brings her prescription of song and dance to McCallum Theatre on Nov. 29, when she headlines the performing art center’s 20th anniversary gala.

Minnelli is no stranger to the Coachella Valley. In the 1993-94 season, she performed a four-show set at the McCallum for what she calls “a wonderful audience.” In February, she received the Steve Chase Humanitarian Award for Arts and Activism. And, like many a celebrity who traveled through Palm Springs in the latter half of the 20th century, Minnelli found a temporary home at the Sinatra complex. “He was my adopted uncle — Uncle Frank,” she fondly recalls. “For every kid in Hollywood, everybody was uncle somebody.”

Minnelli certainly lived — and eventually transcended — the traditional lifestyle of the Hollywood kid. Born to Judy Garland and movie director Vincente Minnelli in 1946, she got her first official taste of stardom in her mother’s 1949 film In the Good Old Summertime. After her parents’ divorce in 1951, she split her time with her father in Los Angeles and on the road with her mother, who toured the world as a concert performer. In her teen years, she felt the pull of New York. She briefly attended New York High School for the Performing Arts before making her professional debut at 17 in the off-Broadway Best Foot Forward with Christopher Walken.

A year later, Minnelli’s first album, Liza! Liza!, reached the Billboard charts, followed by a co-billing with her mother at the London Palladium. At 19, Minnelli garnered her first starring role on Broadway in Flora the Red Menace, for which she became the youngest woman to win a Tony Award for Best Actress in a Musical. In late 1965, she performed her first nightclub act, marking the beginning of her tenure as one of the world’s greatest live performers.

Though Minnelli has acted in her share of films (her most notable being Cabaret, for which she won an Oscar), concerts have always taken center stage. Her Emmy-winning televised concert in 1972, Liza With a Z, cemented her status as a gifted singer and dancer who knew the meaning of showmanship. Years of touring with acting gigs sandwiched in between marked much of the next three decades for Minnelli, highlights of which included a record-breaking three-week run at Carnegie Hall in 1987, a Grammy Legend award in 1989, and two Golden Globes.

Minnelli continues to evolve as an artist by opening herself up to new experiences and carefully choosing acting roles. In 1989, she collaborated with the Pet Shop Boys for the successful dance hit “Losing My Mind.” Last year, she was the guest vocalist on an album for the rock band My Chemical Romance. She also became a fan favorite on the cult TV hit Arrested Development in 2003 and 2004, which broadened her appeal.

“The funny thing is, I have so many young fans now,” Minnelli says. “It’s interesting, because their grandmother brings their mother who knows me, who brings their daughter who was a great big fan of Arrested Development.”

Her current concert, which she will perform at the McCallum, is called The Godmother and the Goddaughter. The show is based on the nightclub act of Minnelli’s beloved godmother, Kay Thompson, and the Williams Brothers.

“Kay did the first nightclub act where people really moved around the stage and [they] hung microphones,” Minnelli explains. “To recreate some of her songs is so much fun, because the arrangements are so good.”

Minnelli, whose South American and European tours this year have received critical praise, says that the Thompson concert is one of the most challenging — and rewarding — of her career. “Musically, it’s really demanding,” she says. “And dance-wise, I haven’t danced this hard since Liza With a Z. When I’m not performing or dancing for eight hours a day [during rehearsal], I’m in dance class. I’ve always taken a two-hour dance class a day my entire life.”

Those who have worked with Minnelli can attest to her work ethic. Joan Palethorpe, a choreographer for The Fabulous Palm Springs Follies, danced for years for Ron Lewis, who is directing Minnelli’s Kay Thompson show. In the early 1990s, Minnelli came to see one of Lewis’ shows and handpicked Palethorpe to choreograph her summer act because Lewis was unavailable.

“She works her buns off,” Palethorpe says. “Her voice is incredible, and she’s such an actress as well. She’s also nice to everybody around her — so courteous, and she cares about everybody.”

Life Beyond the Stage

Despite the rigors of touring, Minnelli makes sure to always spend quality time at her New York City home. “I balance my life in the way I travel,” she says. “I don’t go out for more than two weeks at a time, and then I’m home for at least 10 days to two weeks. I go out for another 10 days, and then I’ll have a month off to do all the other things I do, which is teaching acting and singing at The Actors Studio and just having a life of my own.”

Two charities also occupy Minnelli’s free time. She serves on the board of The Institutes for the Achievement for Human Potential, a nonprofit educational organization that introduces caregivers to the field of brain development for children. She also is involved with amfAR, The Foundation for AIDS Research. “AmfAR is important to me because I’ve lost so many friends that I knew,” Minnelli says.

Because of her desire to stay close to her home, Minnelli likely will not do an extended-stay Las Vegas show, à la Barry Manilow or Celine Dion. “[Promoters] have asked me several times to do something like that,” she says. “I’ve been lucky enough to have them invite me out there to do that, but I prefer it when I go out a week at a time.”

As for her future plans, the 61-year-old shows no signs of slowing down. She will tour through the rest of the year. Additionally, Craig Zadan and Neil Meron, the producers behind the movies Chicago and Hairspray, will organize a television special by the end of this year or beginning of 2008 based on Minnelli’s current tour. (The two men were also responsible for last year’s redistribution of Liza With a Z.)

Always one to show her fans love and appreciation, Minnelli is guided by one main principle: “I try my best every time out.”

It’s a simple maxim for the legendary performer, but one that keeps fans continually coming back for more.

LIZA OFF THE CUFF

Palm Springs Life: What are you listening to these days?
Liza Minnelli: I love Fall Out Boy, My Chemical Romance, and Maroon 5.

PSL: Who would be your ideal duet partners?
LM: I love Bonnie Raitt. I would love to sing with her on something. And I love Michael Bublé.

PSL: Your role as Lucille Austero in Arrested Development gained both critical and fanacclaim. Would you ever do a sitcom again?
LM: Yes, if it was that funny a part.

PSL: What’s been one of the best movies you’ve seen this year?
LM: I went to the premiere of Hairspray with Ron Lewis [Minnelli’s director of her current tour]. Everybody in it was wonderful. Chris Walken is phenomenal. John Travolta is fantastic in it, and so is Queen Latifah. Michelle Pfeiffer is so creative in this movie; she has to be so mean in her role, and she is so funny. It was a wonderful show. I love seeing other people succeed.

PSL: Would you ever consider doing something like Hairspray or another revival or remake?
LM: Sure, if it had a part I wanted to play and a good director.