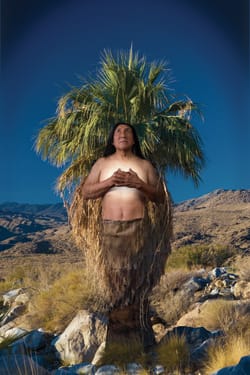 Passed from one generation to the next, these Native American stories and traditions seem as old as the mountains

In Tahquitz Canyon  on a morning when the air is notably still, a prairie falcon sounds out its shrill call high in the cliffs above Tahquitz Creek. Kree kree kree … kik kik kik comes the high-pitched squawk, reverberating off the canyon walls as the bird takes flight toward a nearby honey mesquite tree.

The Cahuilla revere this place as magical, and it’s easy to see why. For much of the year, a vibrant stream cuts through the canyon floor — a flow that for more than 2,000 years provided the desert’s indigenous people with drinking water and pristine pools in which to bathe and cool off. The canyon floor was a place where Cahuilla children played kickball or shinny (a game with a ball, sticks, and a goal post), where Cahuilla women wove baskets or crushed acorns gathered in the fall, and where Cahuilla men hunted rabbit and, in winter, the mule deer that ventured down from the mountains to keep warm.

It was and, legend has it, still is a place where an evil spirit named Tahquitz (Taw’ kwish) hunts for people’s souls and is reported to appear as a green meteor-like ball of fire. He was the first shaman created by Mukat, the Creator. Tahquitz possessed supernatural powers and, in the beginning, used his powers for the good of all the people. But over time, he used his powers for selfish reasons. “He began doing evil things to his people, causing death and destruction, and was banished to Tahquitz Canyon,” says O’Jay Vanegas, director of education for the Agua Caliente Cultural Museum.

An elder of the Agua Caliente Band of Cahuilla Indians tells the story of a beautiful young maiden who ventured into Tahquitz Canyon. At a place known as Green Tree Pool, she began to bathe. Tahquitz saw her and wanted her for himself. He took her and kept her in his cave high up in the canyon. He fed her people’s souls. The young maiden was very unhappy and pleaded with Tahquitz to release her. He finally agreed to free her on the condition that she not tell anyone what had happened to her. She promised and Tahquitz returned her to the pool where he first saw her.

The people were amazed to see her alive and well. They began pressuring her to tell them what had happened. Remembering her promise to Tahquitz, she refused to say anything. However, under mounting suspicion and pressure, the villagers finally got the young maiden to tell her story. According to legend, she was found dead the next morning.

To honor the young maiden, Green Tree Pool is remembered as the site of her abduction and return. As for Tahquitz, his spirit is said to reside high in the San Jacinto Mountain Range, which the Cahuilla call Tahquishhemki (Place of Tahquitz).

Today, Tahquitz Canyon is held as a place of wonder, power, adventure, and danger by both Indian and non-Indian people. The presence of rock art in the canyon indicates the area was a special and sacred place. Rock mortars, remains of shelters, and other artifacts indicate the Cahuilla lived a varied and abundant life there.

Like Tahquitz, the canyons that skirt the Coachella Valley — cutting swaths into the San Jacinto, Santa Rosa, San Gorgonio, and Little San Bernardino mountain ranges, as well as the foothills, desert passes, and desert valleys — are steeped in history and legend, oral traditions of a people who settled here more than 2,000 years ago after their great leader Evon ga net claimed the area for the Cahuilla and Ca wis ke on ca (Fox’s Horns) brought the Cahuilla to Sec he (the sound of boiling water, the hot mineral spring where the Spa Hotel is now located).

The legends, like the legend of Tahquitz with its moral lesson of having good intentions and doing good deeds, have traditionally provided the Cahuilla with a means of passing on their traditions, protocols, and responsibilities,” Vanegas says. “They don’t play as much of a role as they used to. Today, the Cahuilla are more contemporary, very modern, and many have lost touch with that part of their heritage. Nevertheless, some of the older Cahuilla still work hard to keep the legends alive.”

Vanegas says that, in the 1950s, Cahuilla people such as the Agua Caliente tribe began to realize that their traditional ways were fading. “They said to themselves, ‘Do we struggle to keep this going or embrace the more modern ways, learn English, and assimilate?’” The Cahuilla have done both, with the help of customs such as bird songs, narratives that can take anywhere from three or four days to sing in their entirety.

“Today, you have a resurgence of young people who are hungry to learn the songs and the dance and to identify with their culture,” Vanegas says.

Most of the traditional bird songs tell the narrative of the Creation Story, a dynamic tale that has been passed down through the generations. It is the story of two brothers, Mukat and Temayawut, who formed the Earth and its inhabitants, as well as the great nukatem, sacred beings that are available for the acquisition of power and knowledge by shamans who have the ability to contact them physically. The renowned local shaman Pedro Chino, for whom Chino Canyon is named, is said to have communed with the nukatem.

The Creation Story says that Temayawut worked three times as fast as Mukat in creating his people, but that the bodies he created were crude. The brothers fought over whose bodies were better. Temayawut took his creations and fled, while Mukat’s creations came alive and began to chatter in different languages. One spoke the Cahuilla language. Mukat pressed this one to his side and deemed his the chosen language.

Cahuilla legend also holds that Mukat created his people in his own image, which meant they could fly. In the Indian Canyons near the mouth of Andreas Canyon is a hill that served as their landing place in the desert. “It’s the one that looks like a big loaf of bread,” Tribal Ranger Rocky Toyama says, pointing to a mound he refers to as a sacred hill. “It has a name, Kauissimtcem Hemki, named by Evon ga net. I like to share it with people, to help keep the stories alive.”

Toyama has been helping keep Cahuilla history and legend alive since 1999, after leaving his job with the National Park Service at Joshua Tree National Park. The Hawaiian native, who is part Okinawan and part Hawaiian, says he fell in love with the desert canyons when he began his Marine Corps career in Twentynine Palms in the 1980s. “This is the last wilderness area to have a history basically intact, that hasn’t been developed over, and I find it a peaceful and humbling experience to be a part of,” he says as he scans the horizon.

As he recounts stories of the sacred places of the Indian Canyons and the Cahuilla people — talking of Tekic, the sacred rock in Andreas Canyon; You koo hul ya me, known as the “place of many brains,” a huge rock formation in Palm Canyon where the heads of the Munalem’s leaders were bashed following one of the few warring periods of the Cahuilla people; and Kow wish so kalet, a huge dome-shaped rock on the ridge south of Cabazon where, it is said, the spirit of Evon ga net still lives — the excitement becomes palpable.

“The California fan palm tree, the only species of palm tree native to California, was very important to the Cahuilla,” Toyama says. “They used it for food. They ate both the fruit and the heart, which was considered the food of last resort, because it killed the tree. They also used it for shelter and in making the tools and instruments they used in daily life.

“Legend holds that a long time ago, before there were any palm trees, there was an elder whose name was Maul, whose days were getting short. He wanted to leave something useful for his people and realized that there were no palm trees in the valley. So he went down to the East Valley and asked the spirits for their help. Suddenly, bark began to form around his legs, and palm fronds began to sprout from his hair. Maul became the first palm tree, and from there the palms spread all over the desert to help feed the Cahuilla people. Today the Cahuilla name for palm tree is maul.

Like the palms, the legends nourish and sustain the Cahuilla people.