Well known Los Angeles architect Leo Marmol is no stranger to the desert. As managing partner of Marmol Radziner, he has produced adept restorations of several iconic midcentury modern buildings here, including the Kaufmann House, Palm Springs Art Museum’s Architecture and Design Center, and Trina Turk’s “Ship of the Desert” house. He even built a pre-fabricated house for himself outside of Desert Hot Springs.

But Marmol’s engagement with the desert goes well beyond his professional practice. He has long been in thrall with the desert’s beauty — its ethereal light, expansive spaces, dramatic geological forms, distinctive colors, and climatological extremes — finding therein, he explains, an inspiring spirituality. “Throughout my time in the desert,” he says, “the unusual play of light and color coupled with the extremes of the environment has profoundly affected the way I understand it. The desert is beautiful and strange, deadly yet teeming with life. It fascinates me, how such intense vitality can present as serene one moment and threatening the next.” 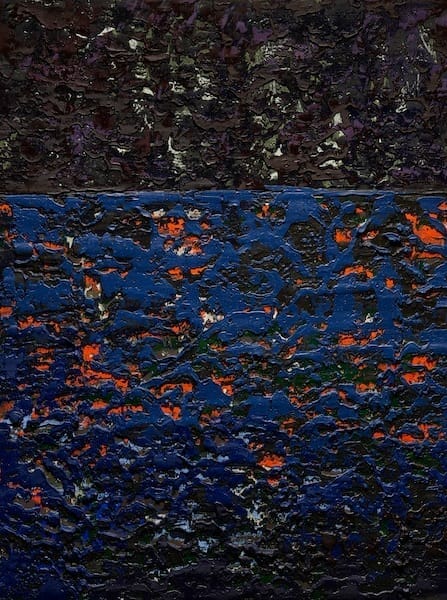 It will come as a surprise to many that over the last few months, Marmol has worked to translate these sensory experiences of the desert environment into his evolving development as a painter, a lesser-known but increasingly vital aspect of his creative vision.

Marmol began painting in the 1980s when he was studying architecture at the California Polytechnic State University, enjoying it as a relief from academics, and he still relishes his time in his painting studio as a space completely apart from his architecture practice. In recent years, has had a number of exhibitions of his paintings dealing with themes such as his family’s Cuban heritage, flags, and patterns of ocean waves. But beginning last summer, the inspiration he derives from the desert resulted in a series of stylistically diverse paintings, executed in his preferred medium of oils and cold wax on board.

The new paintings appear in the current exhibition at Melissa Morgan Fine Art in Palm Desert. And it is safe to say that this series comes as something of a jolt to a public that knows Marmol only for his architecture. Thick, heavily worked paint surfaces, applied with scrapers and squeegees, brilliant daylight colors contrasting with nocturnal blacks, and a sly combination of organic form and underlying geometric structure vividly project deeply felt impressions of desert life. Although these paintings are the first of their kind by Marmol, they impress with their robust integration of subject matter and formal handling. 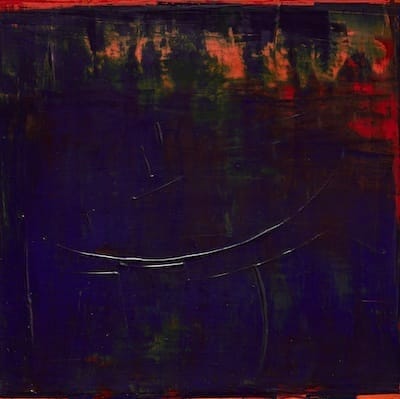 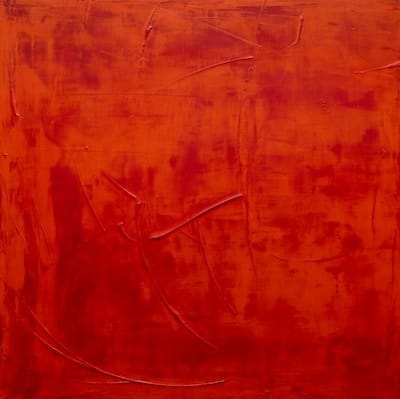 2022-19 - Cast in Golden Hour I, 2022, Oil and cold wax on board, 24 x 24
If one is searching for a stylistic category that best applies to these new works, it is abstract expressionism that first comes to mind, with its gestural brushwork, intense colors, and moody emotionality. But Marmol’s expressive language is not pure abstraction, cleaving instead to an amalgam of the literal and the imaginary, of figuration and spontaneously invented form. Within seemingly abstract fields of heavy paint, references to real landscape forms and conditions clearly emerge. Paintings such as Pastoral Views in the Borrego II and Poets Call it Sleep I exemplify this approach. For both, the titles themselves alert us to inherent landscape themes, further revealed by the horizontal dividing lines suggestive of horizons, with sky above and land below. Marmol explains that a prime motivator for his paintings is the way desert light energizes the colors of flora and geology, and these two works show this principle at work in contrasting daytime and nighttime views. In the first, strong sunlight illuminates the beauty of springtime vegetation and wildflowers depicted under a deep blue sky. In the second, the sky is black with gleaming white stars and a dim light playing off splashes of landscape color. 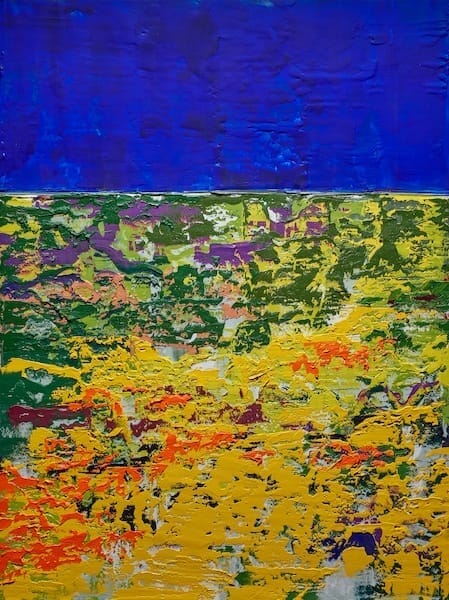 Pastoral Views in the Borrego II

Among the distinctive groups within the overall desert series, the formal language differs from group to group but maintains this dialogue between realism and abstraction. In Cast in Golden Hour I, the view seems to be straight down onto a desert floor, with rhythmic ridges formed by sweeps of a squeegee suggesting sand dunes or mountain formations. Now the paint surface is smooth and silky rather than gestural, and the entire field is washed in the monochromatic reds of a desert sunset. In Time Passing in Color II, the view has shifted to nighttime, with the same landscape ridges but now only a hint of red radiance lingering. Hour Azure I is one of the most geometrically structured of the desert essays and reminds us at first of a Kenneth Noland striped painting. But on the other hand, it represents a meditation on desert sky colors at different times of day and under different weather conditions, invoking a Monet-like attention to atmospheric effects.

As points of departure for such works, Marmol relies on his own observations, memories, and impressions, but also gives credit to the lush and sensitive desert photographs of Steven Moore that he has hanging in his studio. Those photos capture the constantly evolving qualities of desert light and, like Marmol’s paintings, remind us that night in the desert can be just as exhilarating for the senses as daytime experiences.

The tradition of desert landscape painting in the Coachella Valley is long and rich, dating back to the tonalist and impressionist painters of the early 20th century, and including historically important names such as Lockwood De Forest, James Swinnerton, and Agnes Pelton. Marmol’s work occupies a distinctive place in this history, embodying artistic values not known before the 1950s, most notably the blending of observation and painterly invention. Famous post-World War II artists such as Willem de Kooning, Joan Mitchell, and Richard Diebenkorn all practiced in their landscape-based paintings their own version of this alchemical mixture, and it is a relatively common technique among contemporary painters wishing to reimagine landscape traditions, but Marmol’s work in this vein has a look all its own. This is due partly to his somewhat unconventional mixing of oil paints and cold wax, which gives the paint itself more body, allowing thick impastos and rich surfaces that record the physical action of arm and wrist. And it is due also to his deep immersion in the sensory stimulants to be found in areas considered by many to be arid and barren, but which actually are fully alive with constantly shifting visual, physical, even spiritual vitality. Marmol wants to lead us into a heightened awareness of these experiences. He will surely have many followers.

Steven Nash is the former executive director of Palm Springs Art Museum and the board vice president of Desert X.