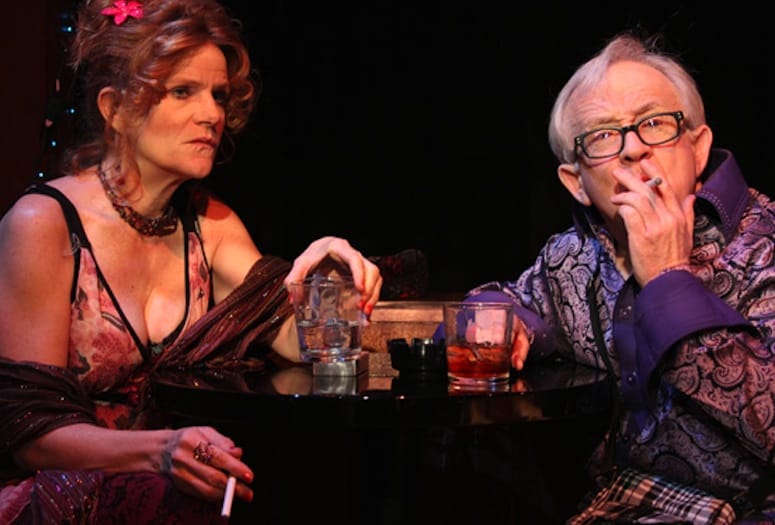 And yet when Jordan appears on three episodes of American Horror Story starting Oct. 9, the actor whose southern drawl and whispy mannerisms can’t help but make you laugh, will turn serious in a role he describes as actress Frances Conroy’s (Six Feet Under) “lapdog”.

“I don’t get to be funny, which is very difficult for me,” Jordan says while standing outside a Starbucks coffee house in West Hollywood last week after just returning from the shoot in New Orleans.

“I would do all these little bits, and the director would come over and he would say, ‘You know what? We don’t need that, you pouring the water and smoking the cigarette. We don’t need that’,” Jordan continues. “I just sit there and not be funny. I’m an evil…even Jessica Lange calls me, ‘You vicious queen’. I’m a vicious queen, and that’s not me at all.”

That will make Jordan’s appearance in Palm Springs Oct. 12 at Riviera Palm Springs all the more inviting to attend.

He will have had a week to prep for being the host of the Equality California Awards where Congressman Mark Takano will be honored with a Leadership award as the first non-white openly gay member of Congress, and former Kansas Governor Kathleen Sebelius will receive the Ally in Leadership Award. What was shooting American Horror Story like?
“Honey, I’ve had to sign every kind of non-disclosure agreement known to man. I’m afraid to even say anything. It’s a tiny part, but it’s fraught with meaning (laughter). I really am pleased that I did the best with what I was given. Like I said, there was 60 people, 60 characters, and a lot happening in that show. FX doesn’t give them the kind of money they need, so they shoot in two units. You never know what’s going on. There are two stages, two units going, just to get one episode done in eight days. At one point, I was in a makeup chair between Patti LuPone and Christine Ebersole. This is like a queen’s dream.”

Why did you choose to host the California Equality Awards?
“I’m not really that political, but I have to tell you that when I got sober, I was 42 years of age. This is the source … a huge source of my shame. I had never registered to vote. Who had time? Do you know what I mean? We were in the bars. Who voted? I was of the generation where you marched in the streets, 'Out of the closets and into the streets, Out of the closets’. I got sober, and it hit me. The change has got to come from within. You can march in the streets until the cows come home. That will, perhaps, bring a little bit of attention to your cause, but it doesn’t really change anything. When I was 42 years old, I registered to vote. I made a decision that I would never ever say no to anything political.”

Do you prepare for such an event?
“They kept calling me saying, ‘You should look up… You should go online and look at the organization, and you should find out what some of the causes are lately’. I said, ‘You know what, honey? I just … I’m just an aging show pony. They just trot me out. Do you know what I mean? Nobody’s expecting me to get up there and give some sort of … I ain’t Nancy Pelosi!”

We missed you at the Cinema Diverse: The Palm Springs Gay and Lesbian Film Festival. Southern Baptist Sissies sold out in two theaters at the Camelot. Why is it that there’s this love affair between director Del Shores’ movies and Palm Springs?
“I think it started with Sordid Lives, and that for some reason Palm Springs discovered it. That’s where it all began. We heard rumors of things, that there was a club called the Gay and Grey. They would get together, the old people and the gay people, and they would go every Saturday at 3:00 and watch Sordid Lives. Then, they would get a lug nut to wear around their neck because there was a line that Beth Grant’s character (Sissy Hickey) delivered. I had an 83-year-old lady come up to me, and she said, ‘You know, honey. Every time I get sad, I go see your movie. Look, I’ve got 23 lug nuts.” I thought, ‘Wow. What a tribute.’”

Del Shores said at the film festival that he wants to do a sequel to Sordid Lives. Are you on board for that?
“I can’t say no to Del. I adore Del Shores, but I’m telling you, we fight. We fought a lot over the editing of (Southern Baptist Sissies). I felt it was way too long, and there’s things that work cinematically, that I don’t … that work on stage, but I don’t think they work cinematically. He was determined to stay true to the play. Del Shores was on the debate team in college. I don’t know how to fight. I’ll scream and go for your jugular, and then I cry. Del Shores just lowers his voice, and he is the best arguer. He’s always right. If Del Shores wants me to be in Sordid Lives 2, I will be shoehorning my fat ass into that orange jumpsuit once again, shaving my entire body. That’s a long time, honey. It gets harder, and harder, and harder. They kept saying, ‘Well, maybe we should …” They wanted to use the same costume. They finally auctioned it off, thank God. They’ll have to build me a new one next time.”

Do you have time for a love life?
“No. I’m … got this thing where I end up with these straight boys that live with me. They’re sort of … not really kept, but keep up with things. I travel so much. I don’t … sex. Honey, I like them young, and I like them pretty, so I can buy that. You can order that through room service practically these days. Go on the Internet and order it up. I was thinking, ‘Am I going to end up old and alone?” I never get lonely. I never, ever, ever get lonely. I haven’t had anybody in my life. I’ve had one straight boy almost nine years. He introduces himself as my straight husband. All my friends say, ‘Honey. Settle down with a nice gay boy.’ I go, ‘Oh, I’d rather get beat with a stick.’ I just can’t even imagine. I don’t have anything to give.”