"I love it when people come up afterward and say to me, “You’ve told my story.” Because I think so much of my story within the gay community, is our story," says Leslie Jordan.
PHOTOGRAPHS COURTESY LESLIE JORDAN

Leslie Jordan may only be just under five feet tall, but sure he can tell a tall tale. The man knows how to work a room, too, people.

The gregarious actor/performer, who is part of this season’s Outlandish performance series, hits the Palm Springs Cultural Center with two outings of Over Exposed, his latest solo stage endeavor. Think of it as a quasi-amalgam of Jordan’s previous shows (Sudden Blindness and Other Southern Tragedies That Have Plagued My Life Thus Far; My Trip Down the Pink Carpet), which lavishly chronicled everything from his Southern Baptist upbringing in Tennessee to his showbiz rise playing significant supporting roles in TV shows like Caroline in the City, Ally McBeal, Will & Grace, and lately, American Horror Story.

And then … there is that hilarious costarring stint as Brother Boy in the hit Del Shores film, Sordid Lives (and its sequel and TV show). The original film garnered a cult following locally, playing to sold-out audiences at the Camelot Theatre.

Fresh off of an afternoon of “so much fun” at the L.A. Equestrian Center, where things were “really fancy,” Jordan takes time to catch up with Palm Springs Life.

• READ NEXT: A steamy new web series "The Third" is based in Palm Springs.

How was your lesson today?

Well, you sit straight up and my instructor says to me, “Think to yourself: Look how pretty I look.”

I love that. Well, congratulations on looking pretty. Let’s talk about the concept for Over Exposed.

The God’s-honest truth is that I’ve been doing the same show basically for many years. [Laughs]. And I come up with new and exciting titles. Well, that’s not exactly true. With this show, I decided to go back to all of my solo shows, look at all of the best stories and put them together in one show. Recently, in New York City, and we named the show to Over Exposed and it played like a house on fire. So, I got the show ready for Palm Springs. It’s basically about me being a little boy who fell out of the womb and landed in his mother’s high heels. And stories about growing up in Tennessee. It ends with me, believe it or not, on the pitcher’s mound at the Washington Nationals, throwing the first pitch out in memory of the 49 people who were massacred in the Orlando nightclub shooting in 2016. It was a big honor. I never held a baseball in my life. There’s a wonderful story there were I learned to pitch. 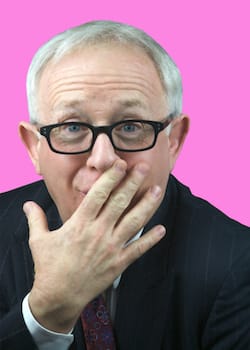 What do you love most about storytelling?

I love it when people come up afterward and say to me, “You’ve told my story.” Because I think so much of my story within the gay community, is our story. When I first got into recovery — I’m 22 years now clean and sober from drugs and alcohol — they taught us to write in a journal because it slows your mind down to the speed of a pen. So, I began to write. And then I would read it out loud to people and they would laugh. I realized very quickly that, and I don’t know why it is, but I can tell stories in a very entertaining way. It’s very healing for me. After Palm Springs, I have an episode of Will & Grace, and then I have a gay cruise in the Caribbean, and then I do another episode of Will & Grace. It’s an amazing life.

Speaking of Will & Grace … How does your story arc with Karen Walker end in this final season of the show?

I have no earthly idea. They don’t tell me. I have such a big mouth. Max Mutchnick created the show with David Kohan, and they are both gay and they are the Will & Grace boys. A wonderful writing team. Max always thinks it’s getting a little too straight and David thinks it’s “getting a little too gay.” They balance each other out. When the reboot happened, Max called me and said, “We want to bring you back.” And I said, “I can’t. I’m dead. At the end of the first show, I flew off of the balcony and all that was left were my opera slippers. There is no Beverly Leslie.” He said, “Well, we’re going to bring you back but not as Beverly Leslie. We’re going to bring you back as his evil twin, Leslie Leslie!” Oh, I believed him. So, I don’t know anything now. But they are, as is American Horror Story, very careful. There are non-disclosure agreements. So, who knows?

You’ve been to Palm Springs quite a bit to perform. What does Palm Springs give you that no other place does?

The first time I was there it was 180 years ago. [Laughs] But then you wake up and there’s this beautiful desert morning. But there’s something about the desert that relaxes me. I will take Palm Springs at 118 degrees over Tennessee, where I’m from, any day at 90. There’s a sense of community in Palm Springs, not just in the gay community, but overall within the older generation. For me, it all started with Sordid Lives, which became a cult classic at the Camelot Theatres. That played there forever. There was a group called the Gays and the Grays, and they would get together and watch the matinees. Every time they saw the movie, they would put a lug nut on a necklace around their neck. This sums up Palm Springs for me. This woman, who was 83 at the time, came up to me one time and said, “Whenever I am down, I go and see your movie.” She had 23 lug nuts around her neck. Bless her heart.

Who do cavort with here? Are you in love?

That’s the only thing I don’t talk about. [Laughs] Because I ran my big trap in the past. But my trips to Palm Springs aren’t about love. That’s all I can say.

Are you digging American Horror Story? Your character this season, a concert promoter, is a hoot.

You mention sober and clean 22 years. What helped you through it all?

Well, I did a little time, [laughs], which I’ll talk about it in the show. I was arrested five times in one year. I’ll never forget the judge looking at me at one point and saying, “Listen, you are going to do 120 days.” He let me out on my 14th day. I was told, “If you so much as spit on the wrong side of the street, you’re going to go back for two years.” It was that. And I had a very good recovery program. What happens is, you begin to help others and that is the key to it — being of loving service to others. Even when you’re depressed. Sometimes, we just need to get up and get off of our ass.