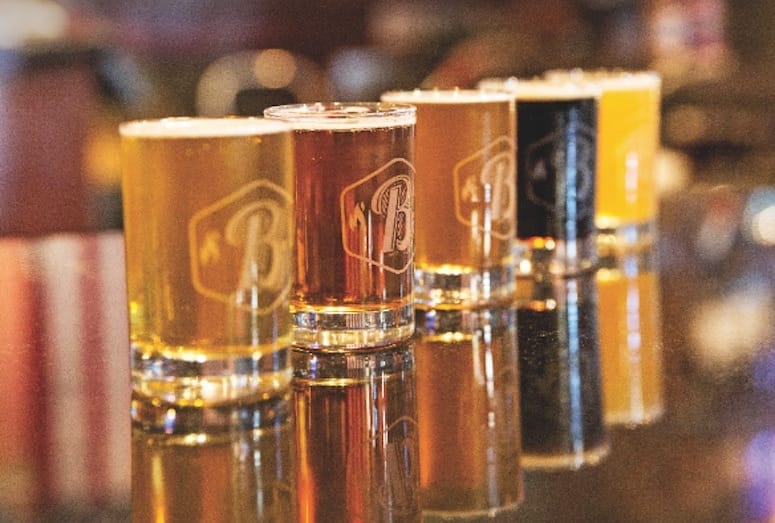 Babe's Bar-B-Que & Brewhouse in Rancho Mirage can lay claim to the California State Fair's Brewery of the Year.
Photo by Jaime Kowal

Rancho Mirage is home to the California State Fair’s 2015 Brewery of the Year. This summer, Babe’s staff and community’s all around favorite — Belgian Vanilla Blonde Ale — brought home the gold at the U.S. Beer Open Championships, adding to a three-year run of major accolades that includes a rating among the Top 10 Belgian Blonde Ales in America by BeerInfo.com. Since then, the Coachella Valley’s oldest craft microbrewery has introduced three more beers of serious interest.

“Our new Imperial IPA is one of the best beers we’ve produced in a long time,” says General Manager Arthur Vasquez.

“IPA has become the new hot standard. This is a lifestyle IPA, strong enough to earn its city namesake,” Vasquez affirms.

Fall never tasted so good as the new apricot Belgian-style tripel with hints of prune, raisins, and baking spices. Rather lighten up? Blackfin Lager’s recipe was born before the brewery even opened its doors. It drinks crisp and clean like a Mexican beer, yet has the characteristics aficionados appreciate. Newbies can ease into the craft beer scene at this two-year-old brewery by sipping a golden Kolschella.

“Our German-style Kölsch is an easy, approachable beer,” says CEO Dave Humphrey. “If you’re trying to get off Bud Light and Coors Light, this one is crisp, clean, and flavorful.”

The house favorite is Momentous, a gold medal-winning IPA made with an unusual, sworn-to-secrecy process. For premium access to the brewery’s most interesting and barrel-aged beers, seasoned enthusiasts join the private reserve club. Members can look forward to the new Harvester, an imperial IPA made from local grapefruit, and a new Belgian tripel called Mayahuel that is brewed with local agave and aged in rum barrels.

On the wild side, Framboys is a sour ale fermented in cabernet barrels that gets a punch of sweetness from locally grown berries. The tasting room is open daily except Mondays. The youngest of the breweries can already claim a few cult classics. Cans of Poolside Blonde and Indian Canyon IPA are already available at more than 170 bars and restaurants.

“Our real must-try is Koffi Porter,” says Director of Sales Derek Lloyd. It’s now so popular it comes in 22-ounce bottles. “Some people shy away from a big-risk dark beer, but we take it to a lot of festivals. Guys and ladies alike say, ‘I’m glad you made me try that.’ ” Beer tasting is a daily endeavor in the Coachella Valley, where breweries know how to pour a good time in every 3- to 6-ounce tasting glass.

“Sample from the lightest beer to the heavier, darker, more full-bodied ones,” says Derek Lloyd, Director of Sales at La Quinta Brewing Co. Usually this approach starts with the lowest level of alcohol and proceeds to the highest. “The most aggressive hops should be last,” he says. According to Lloyd, the first step is to ditch your comfort zone. “Since you’re not investing in a full beer, try what you might not normally order. You might discover something you really love.”

At Coachella Valley Brewing Co., purchase a tasting set on Friday at 6:30 p.m. or Saturday at 2, 4, or 6 p.m. and embark on a free brewery tour to enhance the experience. (Ten or more can tour any time if arranging in advance.)

Babe’s Bar-B-Que & Brewhouse offers sample sets in the restaurant or bar. Just $8 yields a 5-ounce sample of all four flagship beers plus Babe’s seasonal selection. Staff happily explain what to expect from this 25-ounce beer-stravaganza.

Every Monday Beer Appreciation Day offers a new beer on tap each week and a Cheers-like atmosphere at Babe’s Bar-B-Que & Brewhouse, from 3 p.m. until close in the bar. www.babesbbque.com

April 30, 2016
Brew at the Zoo is the annual fundraising event that supports The Living Desert’s mission and programs. Live music and unlimited samplings of handcrafted beers from local breweries and restaurants. www.livingdesert.org