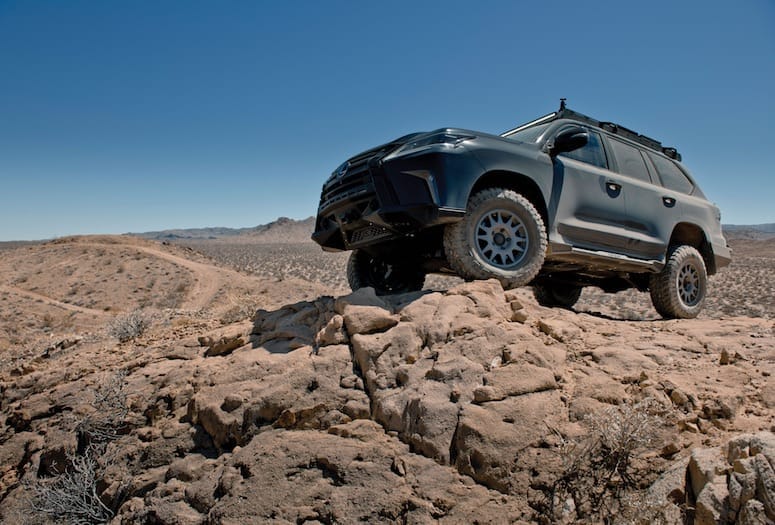 Lexus built the J201 to ride over dirt, mud, sand, and rocks — a comfy fit for drivers who love exploring the desert off road.

Editor’s note: Mountain bikes and 4-wheel-drive vehicles are welcome in Joshua Tree National Park. Drivers must stay on established roads for the protection of the ecosystem and the natural features. Tire tracks on the open desert can last for years and spoil the wilderness experience of future visitors. Off-road and all-terrain vehicles are prohibited in the park.

Driving through a stretch of Joshua Tree in an overlanding vehicle hardly makes one unique these days. Neither does parking one overnight in the gravel lot of The Lautner Compound, the small modernist resort in Desert Hot Springs designed in 1947 by architect John Lautner. But that didn’t stop us from doing either — and enjoying it.

The hobby of overlanding is expanding exponentially in the United States, especially in the gorgeous mountains and high and low desert parks around the Coachella Valley. Defined as the practice of off-roading in a specially equipped four-wheel-drive vehicle, outfitted to allow for extended stays in remote areas, the activity started in Australia, where there is a plethora of isolated land to roam, and then found favor in Africa and South and Central America. Riding the wave of interest in adventure activities such as kayaking, mountain biking, camping, and RVing — which experts expect to triple sales in the next five years — overlanding has caught on here in a big way.

Leaning into the trend, Lexus recently introduced a one-off concept vehicle, the J201, which is meant to demonstrate the brand’s interest in the category. This might seem out of character for Toyota’s luxury nameplate, which is elementally associated with repose, poise, and polish. 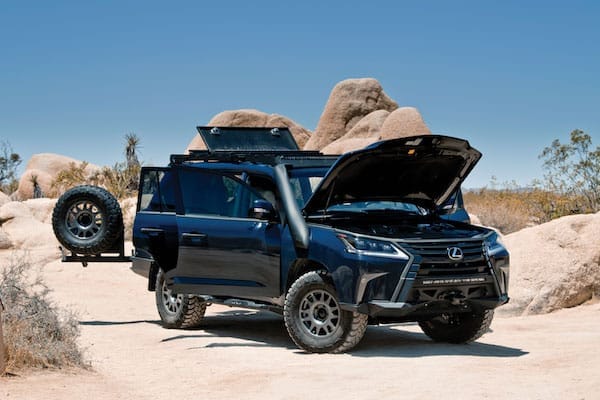 Features such as enhanced suspension and hydraulics make the J201 a smooth ride in the back country.

The J201 is based on the marque’s LX570 flagship SUV, one that is built on the same chassis and componentry that underpins the Toyota Land Cruiser, long famed as a go-anywhere vehicle used for decades by non-governmental organizations like the Red Cross and the United Nations in the most inhospitable conditions on Earth. 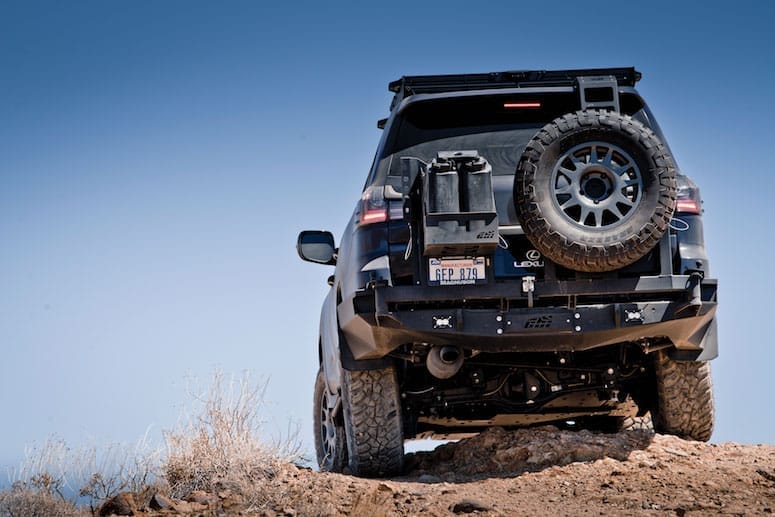 “The practice of overlanding is nothing new,” says Vinay Shahani, the brand’s vice president of marketing for America. “However, the popularity of it is. And with it, so is the love of getting out to experience new things, to appreciate nature, and to live life to its fullest. Being able to appreciate fresh air, to venture onto a new path or route, to safely go into nature, and to learn from all of it, is, itself, a luxury.
“As a brand, these values speak to us,” he continues. “I believe our vehicles — with their takumi [artisan]-crafted engineering and design — can further enable and enhance this admiration of adventure, be it on a new route into work, or within one of our spectacular national parks.” 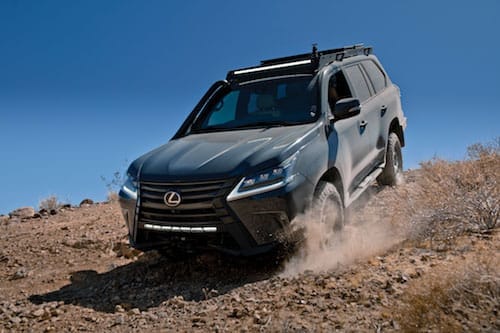 The J201 has the bona fides to make this kind of off-roading possible, as we discovered in a day of adventuring. It has a jacked up suspension that lifts even further by activating the onboard hydraulic lift, in case the rubble gets big or the water deepens. It features heavy-duty front and rear bumpers, and plating underneath the prow and stern of the vehicle and under its flanks, to protect the knobby 33-inch tires from punctures by the sharp rocks on our path. 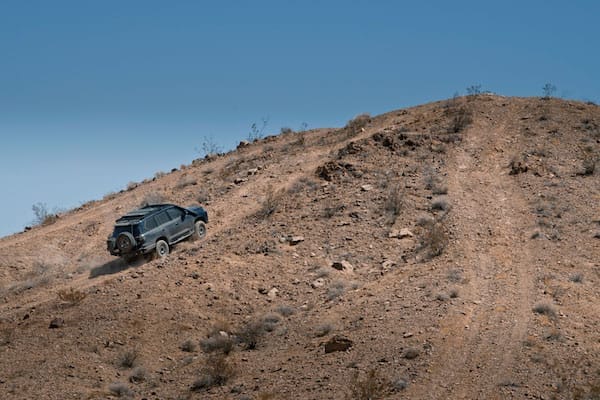 It has upgraded front and rear brakes, useful for hauling down the extra weight added to the vehicle by its aforementioned metal racks and protectors. It’s loaded with all manner of gas-storing jerry cans, spare tires, air compressors, and custom Halliburton gear bins — even integrated doggie bowls for canine companions — for days of back country adventuring.

And it has a winch to yank itself out of any trouble from which its caprine four-wheel-drive system couldn’t extricate it. (Despite our best efforts on gravel hills, rutted mountainsides, sandy dunes, and rocky dried stream sluices, we did not find such a situation.)

It also includes a supercharger atop Toyota’s 5.7-liter V8, a device that uses some of the engine’s twist to pull more air into the fuel mixture, thus creating more power — kind of like blowing on a fire. This upgrades the engine from a standard 383 hp and 403 lb-ft output to a ripping 550 hp/550 lb-ft, handily compensating for the extra thousand pounds, that all the fancy adventure gear adds to the trucks already prodigious 6,000-pound base weight.

While dirt, mud, sand, and rock chips might not seem aligned with the Lexus leather-lined and refined messaging, the brand appears dead set on producing something like it — though perhaps not quite as extreme — in the near future. 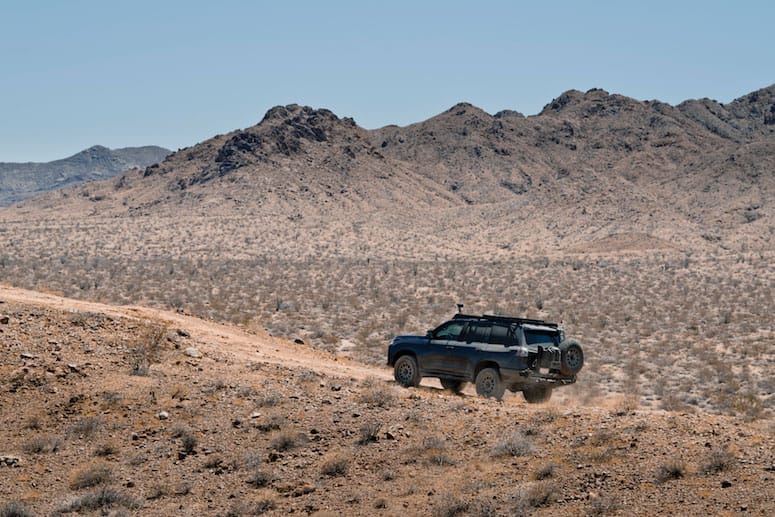 “For us, J201 is inspiring and we hope it provokes the same feelings from our guests,” Shahani says. “This is not a brand shift. It’s an experimental expansion of our collective mindset and perspective. To become better, and to craft better vehicles, we need to consistently open our eyes and our experiences. We need to push ourselves. So this is a sort of omotenashi, a means of anticipatory hospitality. In the case of J201, we’re leaning heavily on our existing adventuring and off-road foundations and plus-ing them up. I’m always a fan of crafting luxury vehicles that excite and that connect to a passionate audience. It’s in our DNA.”

• READ NEXT: Polestar is Volvo's Family of Electrified Competitors to Tesla.