The 2018 Lexus LS sedan is brand-new, on sale only since February. Yet work on it started hundreds of years ago. No, Lexus doesn’t operate the world’s slowest assembly line, but many of the car’s exquisite components are handmade using craftsmanship practices cultivated by Japanese artisans over centuries — some of them so challenging and nuanced that Lexus demands they be executed only by the steady, fastidious hands of master-level craftspeople known as takumi. Details like this help impart Lexus’ newest flagship with elegance, refinement, and character like no other car on the market, one that remains as solid and quiet as ever yet is uniquely enriched by the culture of its homeland.

This represents a paradigm shift for the LS, and a necessary one. Ever since Toyota launched Lexus in 1989, the LS has been the rolling embodiment of the brand’s “Relentless Pursuit of Perfection” mantra, which was actually the relentless pursuit of perfection as established earlier in the ’80s by the Mercedes-Benz S-Class — only Lexus’ version had more sanitized styling, isolationist dynamics, and a lower price. The “cut, paste, perfect” formula worked well initially, making the LS the best-selling luxury sedan in the U.S. for 15 of its first 17 years, despite its lack of originality and utter dearth of soul.

That quiet competence no longer cuts it. Facing competitors that have become truly outstanding with more to emulate, the LS is further handicapped by a shrinking market overall, as high-rolling hedonists abandon traditional luxury sedans in favor of cushy crossovers. Hence, in 2017 the LS earned barely 10 percent of the number of buyers it had in 1990. Since another S-Class clone probably wouldn’t have fared much better, Lexus had little choice but to dig deep and make something remarkable, authentic, and unique for the fifth-generation LS. 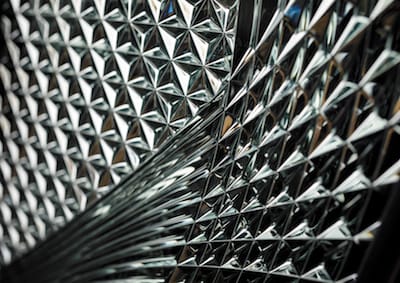 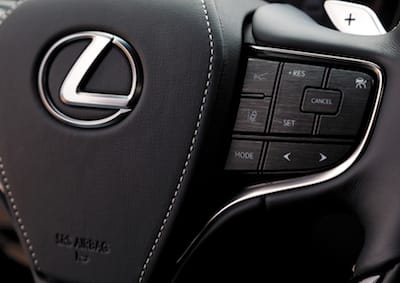 “The new LS was created as an expression of what a true Japanese sedan should be, from its design language to the way it drives,” says chief engineer Toshio Asahi. “Therefore, it has its own unique identity. My sincere wish is for our customers to feel and experience the wonderful qualities of the new Lexus flagship that embraces the ethos of my country.”

Asahi and his team developed an all-new architecture upon which designers draped a flowing new body. The LS is longer, wider, and lower than before, with a gently arching, fastback profile accentuated by expansive windows: four on each side, lassoed together by a thick band of polished zinc. The elongated cabin is nestled low between slightly flared fenders, affording it a newfound muscularity that makes the outgoing LS appear thick-waisted and cold.

Dramatic details contribute to the sinewy appearance and could even make wonderful sculptures all by themselves. Lexus’ controversial “spindle” grille is striking, cinched tightly around the “L” badge, and contains a complex inner lattice with some 5,000 surfaces (7,000 in the case of the sportier F-Sport model, which also gets smoked chrome and darkened wheels). Curious Z-shape headlamps contain three delicate light spears sprouting from a thicker band of light below. Meanwhile, in back, the wraparound taillights feature six L-shaped LED strips underscored by a chrome accent that appears to drip down the car’s corners.

While the new LS may garner more stares than any since the original model, attention-getting style was less important than getting the interior right. The specific “ethos” of Japan that Asahi refers to is the notion of hospitality, or omotenashi. Lexus interprets this as the “human-focused” way the LS anticipates its occupants’ needs, providing comfort while protecting them from hazards. By nearly every objective measure — cabin space, amenities, and safety (including an available semi-autonomous driving system) — the new LS is more hospitable than ever before. But what makes it feel truly special — indeed, what prompted me to write about it in the first place — are those aforementioned takumi-influenced interior details. Among them:

• Sweeping lines stretching across the dashboard (cleverly concealing the climate control vents) that were inspired by the Japanese “Koto” guitar.

• Two optional striking “art wood” trim veneers surrounding the interior door handles and center console, one with flowing stripes, the other in a meticulous herringbone mosaic.

• Hand-pleated, origami-inspired fabric door panels so complex that a craftsperson can complete no more than 12 per day — enough for only three vehicles.

In addition to the richness and character of the design and cabin is a hearty injection of horsepower under the hood. Admittedly, your humble author had hoped to see the ebullient 471-horsepower V8 in the sensuous, $93,000-plus LC500 sports coupe, but with 416 horsepower and 442 foot-pounds of torque, the LS500’s turbocharged V6 handily outguns the 2017 LS460’s V8, with masterful shifts served up by a new 10-speed automatic transmission. Clearly differentiated, driver-selectable modes tailor responsiveness of the engine and transmission, as well as the firmness of the ride. Alternatively, there’s a hybrid LS500h, with a weaker V6 paired with electric motors, for a still-respectable 354 horsepower and up to 27 mpg, according to Lexus. All-wheel drive is also available. 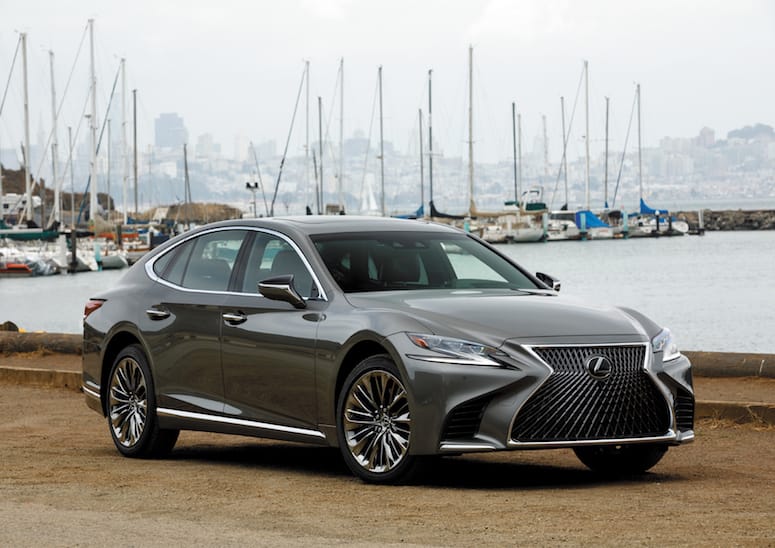 The first thing I’ll say about driving the 2018 Lexus LS — I tested an all-wheel-drive LS500 in F-Sport regalia — is that it still feels huge, especially when making U-turns, but it’s more planted than previous models, and its “waft” game approaches Bentley level. The V6 feels strong, though it sounds rather blasé, but that was only when audible at all, which wasn’t much of the time. Customers will have to get used to not having a throaty V8 as an option, but the power and turbocharged smoothness make up for much of what is lacking.

Drive wheels
Rear or all

Surprisingly precise steering, tidy handling (for such a big thing), and strong brakes with excellent pedal feel entertain me as I’d never expected in an LS. The F-Sport’s intriguing, if pricey, Performance Package sounds even more fun, with rear-wheel steering, a variable-ratio steering rack, and active stabilizers. That said, considering how well the standard F-Sport comports itself, the $9,700 package price would probably be better spent elsewhere, unless Lexus decides to toss in the LC’s V8 for good measure.

Speaking of price, the 2018 Lexus LS starts at $75,995 — $3,820 less than the long-wheelbase 2017 model — with hybrid models starting at $80,505. All-wheel drive will set you back an additional $3,200. Most of the takumi-crafted pieces come in comprehensive option packages that bloat the bottom line considerably; two Executive Packages offer 22-way power reclining and massaging rear seats, available with or without the aforementioned crystal/origami door panels ($23,100 or $17,100).

Even if they don’t know much about Japan’s origami, crystal-cutting, metalcraft, and woodwork traditions, anyone who’s owned or shopped for an LS in the past will notice the change in character — hell, experiencing any character at all in an LS is newsworthy. Having given up its relentless pursuit of other brands’ interpretation of luxury, the LS has become a car that its homeland can be proud of.