The front portion of the bar is where the experience begins at Libation Room.
PHOTOGRAPH COURTESY LIBATION ROOM

Not too long ago El Paseo had a number of bars that gave the avenue known for its luxurious shopping a bit of nightlife. Over the years the bars closed, replaced by a gallery, an eatery, or a boutique. Ever since, this stretch of Palm Desert falls quiet after the restaurants close.

Enter Barry Gilinsky and Christopher Kaypekian, co-owners of Libation Room, who aim to correct this course. Their creation will change your perception of El Paseo. Crossing the threshold of the thick black velvet curtain between the street and the bar you are cordially transported to a new way of life.

“I noticed that El Paseo would be dead by 10:30,” Gilinsky says. “It was obvious something needed to be done to change that.”

With a connoisseur’s eye Gilinsky and Kaypekian have changed El Paseo in a stroke. They invite you to take a break from the hotel lounge, the sports bar, and to step out of the steakhouse rut. Libation Room is simply the coolest place in Palm Desert.

Gilinksy is a native of Cape Town, South Africa, where he owned and operated a number of successful bars. He described his business partnership with Kaypekian, who enjoys dirty martinis, fast cars, and a good stogie, as “a match made in heaven.” Low lighting, black brick, glass chandeliers, Libation Room is an architectural nod to taverns of old with a chic contemporary intelligence. The dress code is semi-casual, but the interior aesthetic complements pearls, leather, or even vinyl. At the bar, tattoos and taffeta mingle with aplomb.

“It’s as if it was the 1920s in here,” Gilinsky says. “I wanted to capture that feel of a speakeasy where you felt you were a part of something, like you were in on something special.” 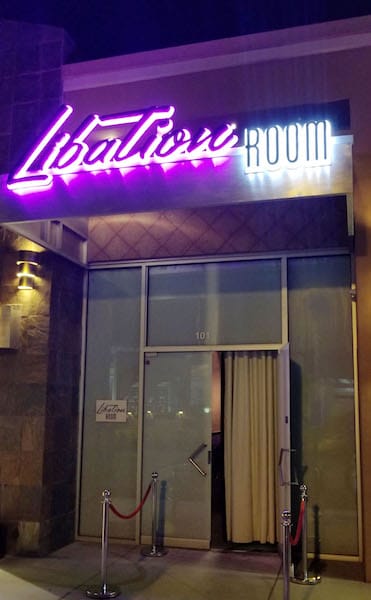 Libation Room has two distinct sections. The front portion has the bar, long and black, where bartenders and servers move at a constant clip keeping the clientele lubricated. The back room offers a more intimate setting, until a live music act begins to perform. Wherever you prefer the mood crackles with a new anticipation of something positive. “We wanted a place that we knew we would like, but that also our friends would like. We have an incredible crowd,” Gilinsky says. “I want to attract people who know what the finer things in life are.”

Libation Room offers a menu of of fine food which leans toward the Mediterranean. Expect pita, olives, octopus, feta, with hummus and tzatziki. Switch things up a bit and go for the fondue served with French baguettes. 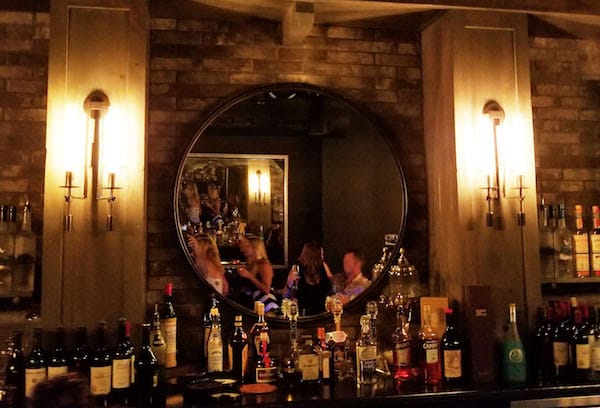