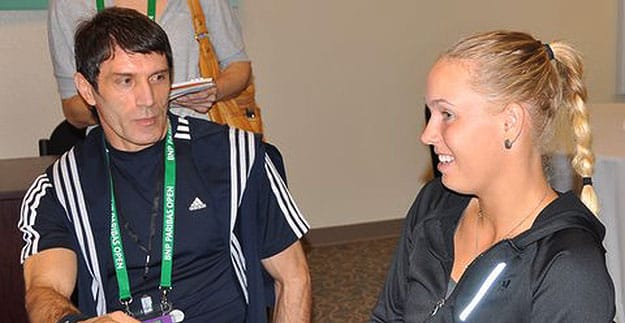 World No. 1 player Novak Djokovic kicked a soccer ball around Wednesday at Indian Wells Tennis Garden sans his shirt, causing quite a raucous stir among female fans during BNP Paribas Open. The Serbian phenom is at the tournament, the fifth largest in the world, to defend his 2011 BNP Paribas Open title.

During an exclusive chat with tennis beauties Maria Sharapova of Russia (No. 2 in the world) and former world No.1 Caroline Wozniacki of Denmark as they waited for their first-round matches at the BNP Paribas Open, the women reminisced about an exhibition match they played earlier this week at another garden — Madison Square Garden in New York City.

The match made headlines around the world, as Wozniacki egged on her boyfriend, Rory Mcllroy, the top golfer in the world, to play a point against Sharapova in her place.“He didn’t have a choice!” Wozniacki told www.palmspringslife.com. “I handed him my racket before twenty thousand people, he had to come out on the court.”

When asked if she would play a golf celebrity pro-am with her famous boyfriend, Wozniacki deferred. “Probably not,” she replied, “although I do play golf here in the desert. I’d rather play doubles with Rory. He’s better in tennis than I'm in golf.”

Sharapova, who lost the point she played with Mcllroy, commended the golf ace.

“Rory definitely has an instinct for sports — he knows tennis,” she said.

Sharapova — who is engaged to Los Angeles Lakers team member Sasha Vujacic — sported a blinding diamond ring and was the only female tennis star to bring a purse to the interview. No wonder fashion designers love her.