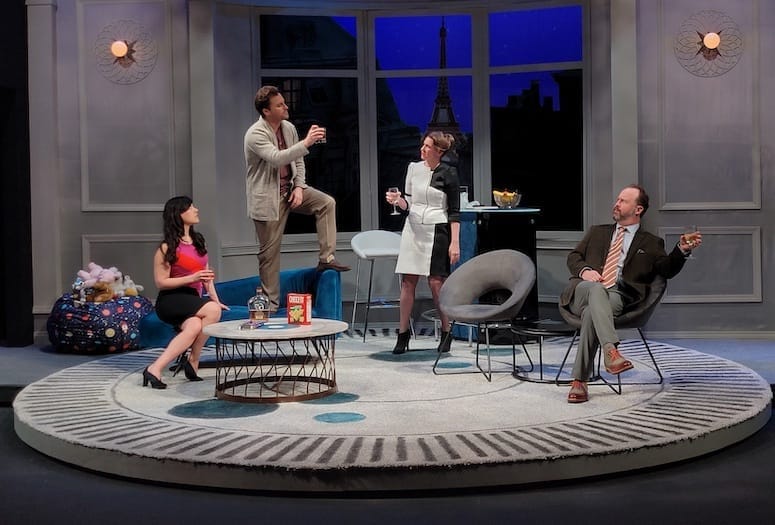 Betsy Moore likes the freedom that comes from working in theater. And it’s not just the actors, but the audience that can exercise how they interpret what they see transpire on the stage.

“I enjoy theater that leaves a little bit of space for the audience to take away what they want,’ says Moore.

When Life x 3 opens Jan. 25 at Coachella Valley Repertory (CV Rep) in Cathedral City, the only thing for certain is you will see Moore tackle the role of Inez as part of a four-person ensemble that presents three versions of two couples trying to find a level of success out of one evening. And the kicker is they are not exactly fond of one another.

That true-to-life approach caught Moore’s attention to audition for the part, and continued to grow as rehearsals took place over the last three weeks.

“There's a lot of quirky, funny bits,” says Moore, who you may recognize from roles on NBC’s This Is Us, HBO’s The Flight Attendant, and the MGM series, The Baxters. “There's a lot of great humor in it, but it's about real life. I just love stuff like that with a sense of humor about the real parts of life.” 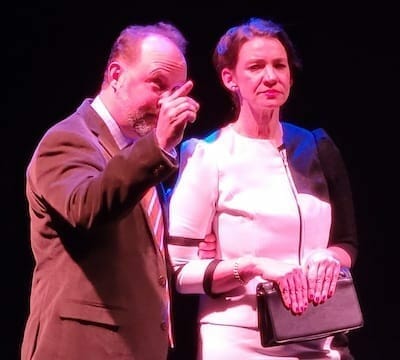 Moore says to pay attention to the character of Henry, played by Charles Pasternak, who “reacts differently to some news that he gets in each act and it really changes the dynamic.”

“There is a bit of a commentary on marriage and relationships, how people interact,” Moore says. “How you process or react to something just changes the outcome so much. Everyone's different in each act but there is a tangible, a change, in each act that you can see how that affects the rest of the evening.”

Have you appeared in this area before? Have you been to Greater Palm Springs?

No, I haven’t. But yes, I’ve been out here before. One of the first times I came out here, I stayed in an amazing house. It was so fancy, beautiful pool, and midcentury style. I thought to myself, "You know, this doesn't seem so bad. I wouldn't mind this being my life."

She’s got a really big heart and she tries really hard, a little too hard. She's pretty sensitive. I can relate to having a high level of sensitivity so it's fun to explore those emotions, and she has a few outbursts.

You bring a variety of experiences to this role. I saw on your website about your one woman show that you did a few years ago. How did that experience help you or is that something that you could take something from and maybe even apply to this role that you're doing?

I would say the character's really different. My solo show is about a woman from middle America in her 60s, and she's got some Kentucky twang. Great sense of humor just like Inez. But I would say that what really I would take away from that experience was that, because my solo show was a comedy of sorts, and the deeper I dug into the truth of that character, the humor came out. I find that to be true of what I'm exploring with Inez. She does have some pretty long outbursts, which are kind of like monologues similar to a solo show.

Coming into a new situation like this play, how do you find chemistry with the rest of the cast?

I definitely sensed it with the actor playing my husband. In fact, he was the first person I spoke to at the audition and I could tell we just had an interesting chemistry which, I guess, Joanne saw because she cast us in the roles. When we first started all working together, it was clear that everybody brought a different shade and color to the table, which was so fun to explore.

Where can we see you next?

I’m in an independent film , How I Learned to Fly and I actually play a homeless woman. That was an interesting exploration. On the festival circuit, I did a short called Influence. it's a dark comedy about, basically, a stage mom whose stepdaughter is an influencer. I think that's going to turn out really, really well.