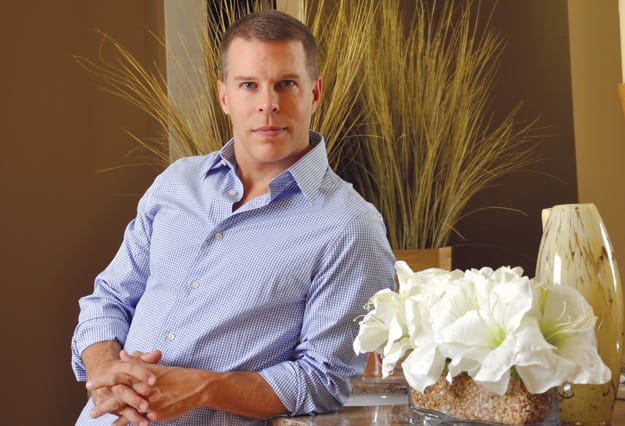 Eric Sakas has created a line of cosmetics and skincare products using food-grade and certified organic ingredients. Each step in the manufacturing process adheres to sustainable practices, including wind energy and recycled/renewable packaging materials.
Photo By JOE VANSYCKLE

At a meeting one day, someone handed Eric Sakas an unlabeled cosmetic sample. He was so impressed that he tracked down the lab in New Mexico. In August, he launched his own nine-product cosmetics and skincare collection made from that formula in a partnership with the lab.

Called Vapour, the line is a logical progression for the 44-year-old, who created cosmetic lines as co-founder, president, and creative director of Kevyn Aucoin Beauty and subsequently as director of color for Philosophy. He has worked with celebrities such as Janet Jackson and Tina Turner, and America’s Next Top Model asked him to develop cosmetics for the television show.

The career move comes only months after Sakas relocated to Palm Springs after 20 years in New York. “I had been coming to Palm Springs for the past five years for holidays every December for three weeks,” he says. “I fell in love with it immediately.” When he was here last December, Sakas told his friend, “I don’t think I’m going back to New York.

“I was ready for a quieter life,” he says, adding that at the same time he didn’t want to give up much. “In fact, I felt like I was gaining a lot [moving here]. I have met some of the most incredibly talented and fascinating people that I have ever met in Palm Springs.”

Sakas came up with the name Vapour because “it imparts a lighter-than-air texture to the skin.” The products contain 100 percent natural ingredients, 70 percent of which are certified organic botanicals. They are available at www.vapourbeauty.com and through www.shopnbc.com.

“We plan to roll out to specialty stores and beauty boutiques in the next year,” Sakas says.