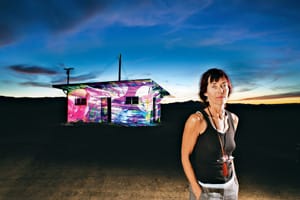 A big, flat sign fades into dusk at the home of National Chloride Co. of America — and art flickers in the darkest desert.

Wharton business school grad Helena Bongartz flashes her art in the most unlikely of places.

No visible life appears except for the still explosions of two creosote plants — small, rigid detonations beside licorice-black road that drifts south toward a stretch of sawtooth mountains. The road is a new hard mulch of tar and sand, split by bright yellow signs and dividing the vast brown-white salt plain — the bed of an ancient dry lake that, except for the salt mine canals that cross it, stretches flat for miles in every direction.

The road and the telephone poles beside it ribbon north to a flat-topped black volcano miles away. Here, a railroad boxcar squats wheel-less on the other side of the road beside a truck and trailer. On this side of the road, the salt-soaked ground, as dead as lunar dust, swirls with tire tracks that swing toward a machine-age structure propped to the sky by two-story-tall, foot-wide wood beams cut square and standing beneath the white lozenge of a water tank as large as a city bus.

Beside the water tank appears the façade of a small white house, which looks a bit like a face — the nose of the front door, the eyes of the two windows flanking it. This face that emerges from ground zero of a California salt mine is where the sprite Helena Bongartz makes her brilliant art — flashing an endlessly varied and colorful phantasmagoria  over the house, hours at a time — every Friday, Saturday, and Sunday night — to an audience of largely nobody.

Out here, 30 minutes can pass in quiet so profound you can hear it. Without a car or truck passing, Bongartz fires up two Canon digital projectors, which catch the abandoned house (mostly gutted) in a crossfire of red, blue, green, yellow, and purple shapes created with cut-up plastic bottles from water she had given, along with Mars bars, to the laborers who built her work space (she dislikes the term “studio”).

“I hate every word associated with art,” Bongartz says, a rare set of headlights igniting a slender and precise face that, with the short black layers of hair above it, resembles Chrissie Hynde’s.

It was still light when her SUV (one she lived in for nine months as she drove around the West) pulled off the road about an hour ago. Our shadows cast thin silhouettes 50 feet toward a sparkle of broken glass behind the house. And I could see that each of Bongartz’s fingernails was painted a different Crayola hue. Now, aside from the spectacular images flashing across the house — a most bizarre, surprising, and impressive display of light and surrealism — there is nothing out here aside from dark shapes of the salt mine detritus to say we are not in the Mojave of 100 years or, for that matter, 100,000 years ago.

This does not bother Bongartz. “I wanted to disassociate myself with everything commonly associated with art,” she says. “No message, no explanations, nothing for sale, no presumption of having to know what it is all about — only, hopefully, a reaction.”

She receives it. When cars come flying out of the night on their way to or from Amboy, Wonder Valley, Twentynine Palms, or Hell and Gone, their headlights slow. Many stop. Sometimes people get out of their vehicles. But most stay in their pickups and vans. “I think a lot [that] people are afraid,” Bongartz says. “They can’t believe what they’re seeing. It even sort of freaks out some of the young Marines who come by from where they train in Twentynine Palms. They tend to be very polite. But they can’t figure out what I’m up to.”

Bongartz was born to wealthy Main Line Philadelphians (her father was a railroad attorney), graduated from the Wharton school of business, and became possibly the first American woman financial analyst in Thailand. Feeling conspicuous there, she spent much of her free time traipsing through the jungle. Tiring of banks, she bought a centuries-old stone farmhouse in Holland and spent 12 years restoring it before returning to the United States. After living in Los Angeles for a year in 2003, she moved to the Mojave.

In the desert, she used those cut-up plastic water bottles as her medium to create free-form computer animations with Adobe Premiere Pro. Her first “gallery” was Joshua Tree National Park, where she projected her sliding, flailing, bobbing, and dancing images over the giant rock formations until rangers approached her. “They were very nice, but wanted me to fill out ‘What am I doing’ forms and stuff.” After projecting at railroad stops with names such as East Siberia, Baghdad, Inka, and Styx, she looked for a more permanent location.

So here it is — scary, frankly.

“Yeah,” she says. “I’ve had stoner kids come out here and go through my car, and they say people are eaten in Amboy. But usually people are more afraid of me than I am of them. One night, a guy came out and stood by his car for an hour with a camera and tripod, but he wouldn’t even come close to me. My images are just too unexpected and weird.”

But Bongartz is not crazy. Rather, she projects a kind of elevated reality. On a good night, she attracts (or is at least observed by) as many as 300 cars. Twin stars of headlights appear from nowhere. They swell, slow, and stop. A curious teenage girl driving from a river trip back to San Juan Capistrano steps out of the night.

Bongartz explains that there’s nothing to be curious about — that it is just what it is: light jumping all over the place in the middle of nowhere. It makes you stop and think.