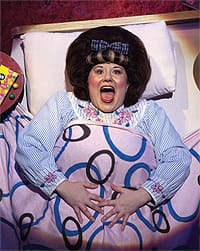 The desert’s cool winter evenings practically demand a little night music. Sweaters, jackets, and dresses — banished by the sun to drawer bottoms and closet recesses — clamor for a return to life. Stores are crowded, and streets bustle with commotion. On some stage, somewhere nearby, Sally Bowles still asks the musical question, “What good is sitting alone in your room?”

Theaters throughout the Coachella Valley answer that question as they raise the 2008 curtain on performances both classy and classical. But the year begins at McCallum Theatre with a mild case of musical insanity. In 1988, Hairspray began life as director John Waters’ musical bid for mainstream motion picture success. Waters’ favorite leading lady, drag queen Divine, played Baltimore mother Edna Turnblad opposite Ricki Lake as Tracy, her obese teenage daughter; Sonny Bono appeared in a supporting role. In 2002, the Broadway musical version of Hairspray swept the Tony Awards with Harvey Fierstein assaying the role of Edna. The recent 2007 cinematic rendering of the Broadway production starred John Travolta as den mother Turnblad.

With the national tour of Hairspray arriving at the McCallum for eight performances (Jan. 8-13), John Waters’ career comes full circle. Once the maven of borderline pornographic midnight movies, Waters has now morphed into the feel-good auteur of family fare. This unlikely transformation mirrors that of Hairspray’s teenage misfit, Tracy Turnblad, who successfully champions the rights of plus-size women and racial minorities over the objections of snooty Baltimore bigots. Bring the family; no one leaves this show without a smile on his face.

A few weeks later (Jan. 25-Feb. 12), Palm Springs’ Palm Canyon Theatre mounts a new production of the musical that made Broadway stars of Patti LuPone and Mandy Patinkin in 1979. Evita remains a jewel in the crown of the Andrew Lloyd Webber canon. Stirring musical numbers connected by intelligent recitation tell the story of Argentina’s former first lady, Eva Peron, from her impoverished childhood to her premature death from cancer. South American revolutionary Che Guevara is on stage to keep her honest throughout with his point-counterpoint narration.

A woman of low birth who slept her way to the top, Peron polarized Argentina by snubbing the aristocracy and taking up the rights of Argentina’s descamisadas, the shirtless workers. But when she made her official tour of Europe in designer gowns, the pope refused her request for an audience. Was Peron an avaricious, self-obsessed social climber or the champion of the poor? Whichever the case, any woman who ever left home to recreate herself will understand the sentiments behind the show’s anthem, “Don’t Cry for Me, Argentina.” Musical theater simply doesn’t get any better than this unless the name above the title is Sondheim.

Moving from the classic to the classical, Annenberg Theater at Palm Springs Art Museum presents Opera Showcase of the Desert for one performance only on the evening of Feb. 6. The vocalists are the winner and four finalists from the Metropolitan Opera Western Regional auditions, performing under the musical direction of Brent McMunn. Arranged in two acts, the evening begins with grand opera and concludes with operettas from composers such as Gilbert and Sullivan. The regional winner will perform the two selections he or she will sing at the final competition at New York’s Metropolitan Opera.

The competitive environment for aspiring opera singers in the United States is simply deadly. Work is scarce, and standards are impossibly high. Just ask American soprano Barbara Hendricks, who couldn’t get arrested stateside. She had to move to Europe in order to carve out her successful recording and stage career that includes the title role in the 1982 French cinema classic Diva. In the Metropolitan Opera competition, all the singers are good. Some may even be as great as former Western Regional and National winner Carol Van Ness. Each year, this event sells out well in advance of the performance date.

A couple nights later, Bernadette Peters brings her one-woman show to the McCallum for two performances (Feb. 8-9) — one woman, that is, if you don’t count the 32 musicians in the orchestra that will be backing her up. Peters exploded onto the American theatrical landscape almost 40 years ago as the off-Broadway star of Dames at Sea, a spoof of 1930s musicals. Since then, she has divided her time among stage, film, recording, and television appearances. Her pert, perky Kewpie doll appeal remains firmly intact and utterly believable despite the fact that Peters turns 60 a few weeks after her McCallum engagement.

With a voice both refined and powerful, Peters’ wealth of experience allows her to deliver pop standards and musical theater classics with equal aplomb. Expect a little Sondheim, some Cole Porter, and hopefully her poignant rendering of “Time Heals Everything” from the failed Jerry Herman musical Mack and Mabel. With little tease, a lot of razzmatazz, and an abundance of charm, Peters sets her own gold standard for performance excellence and always rises to the occasion.

The La Quinta Playhouse reaches into the past for a rare revival of Moss Hart’s Light Up the Sky (Feb. 14-March 16). This 1948 backstage comedy revolves around a fictional playwright whose new play is savaged by the critics on its out-of-town tryout. A temperamental actress, narcissistic director, and cranky stage mother stir the pot as the playwright scrambles to snatch victory from the jaws of defeat before the show debuts on Broadway.

It is somewhat ironic to note that the memory of the Pulitzer Prize-winning Hart (1904-1961), who often wrote in collaboration with George S. Kaufman, was ultimately eclipsed by the visibility of his widow, Kitty Carlisle Hart, who survived him by 46 years. In much the same way, Mrs. Hart’s own career as a lyric soprano was overshadowed by her regular television appearances on television game shows such as To Tell the Truth.

In March, McCallum Theatre hosts the national tour of Andrew Lloyd Webber’s Cats for five performances (March 28-30). The inspiration for the musical comes from poems contained in T.S. Eliot’s Old Possum’s Book of Practical Cats. As the curtain rises, a ragtag band of “Jellicle” cats assumes the stage, prancing, crawling, and purring its way around the proscenium before singing the story of the tribe and its members. Before the final curtain, the audience will meet criminal cats, actor cats, magician cats, and the unforgettable Grizabella.

Wardrobe and makeup, as well as the actors’ vocal and physical agility, are essential to the success of Cats; all roles are played by actors in cat costumes. No humans are portrayed, and cat-lovers often see this as the musical’s greatest strength. Even dog people will find it hard to resist the aging Grizabella’s lament in “Memory,” the show’s most evocative musical interlude. The song appears briefly at the end of the first act before it returns in full form near the end of the play. Cats debuted in America in 1982 and remained the longest-running musical in Broadway history until it was surpassed in 2006 by Les Miserables. Although Cats does not rise to the dramatic heights of Lloyd Webber’s Evita, the play’s accessibility to all ages and cultures provides universal and enduring appeal.

In April, the cats slinking across the stage of Palm Canyon Theatre will be just as feline but somewhat less simpatico. The claws will all be painted Jungle Red in this revival of Clare Boothe Luce’s The Women (April 4-16). In 1939, the unforgettable George Cukor film version offered Norma Shearer as saintly Mary Haines and Joan Crawford as the evil Crystal Allen. An instant camp classic, the film was based on Luce’s 1936 Broadway smash. Now the original play returns to the stage en flagrante, with a cast of 13 women.

Expect lots of scenery chewing as busybody Sylvia Fowler inserts herself into Mary Haines’ rocky marriage by becoming the ally of her rival, conniving salesgirl Crystal Allen. Faster than you can say “interlocutory decree,” all the women in Haines’ upper-class circle are cooling their heels at a Nevada ranch, establishing residency in order to finalize their divorces. No one understood this territory better than Clare Booth, who was writing photo captions for Vogue in 1930. One divorce and six years later, she was a successful New York playwright and the wife of Henry R. Luce, the president of Time Inc. As the nonpareil of feminine witchery, The Women remains in a class by itself.