Eight nights of runway. Thirty-eight designers. Six-hundred-fifty pairs of shoes. The 12th incarnation of Fashion Week El Paseo unfolded the latest trends across seasons, including menswear and more than a few diaphanous ensembles that left very little to the imagination.

Since its inception in 2006, Fashion Week has become the largest event of its kind on the West Coast. Attendance jumped 10 percent this year, drawing 12,401 guests. That’s more than seven times the event’s inaugural turnout, which comes as no surprise with its increasingly diverse star-studded lineups. This year’s sizable list of influential designers included Rosetta Getty, whose easily wearable apparel is all over the pages of Vogue and InStyle; Michael Costello, the onetime Coachella Valley resident who made it big on Project Runway and later dressed the righteous Queen Bey herself; and CD Greene, who designs spangle-covered gowns for the likes of Christina Aguilera and Tina Turner.

The 100-foot catwalk and bustling white tents take over the upper deck at The Gardens on El Paseo in Palm Desert for a week of grandeur every spring. “I didn’t realize this was such a big deal here in Palm Springs,” designer Chris March said at the Stars of Project Runway trunk show. “I mean, there’s no runway that big in New York. Let me tell you, and [no show] with that many people.”

While fashion exhibitions around the globe are largely exclusive and populated by editors, press, and industry buyers — they occupy nearly 85 percent of the chairs, according to a February 2017 article in New York Times’ T Magazine — Fashion Week El Paseo is all about the consumer. Here, the general fashion-curious public outnumbers media-credentialed guests 99 to 1.

Beyond watching the latest finery flock the runway, the stylish set can mingle with designers at afternoon trunk shows over mimosas and bloody marys and take advantage of festive pop-up events and special discounts at El Paseo shops. There’s even a Sunday afternoon canine-couture production for those looking to find Fifi a new frock. 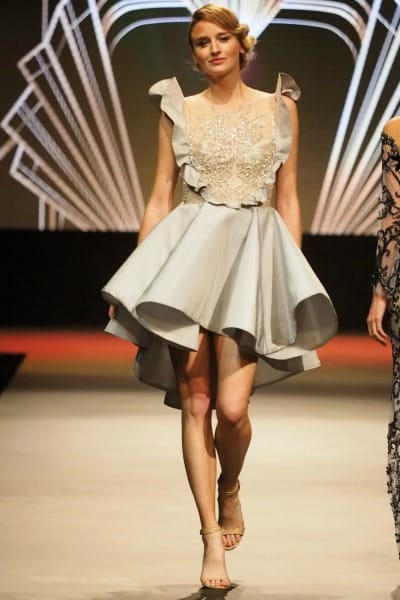 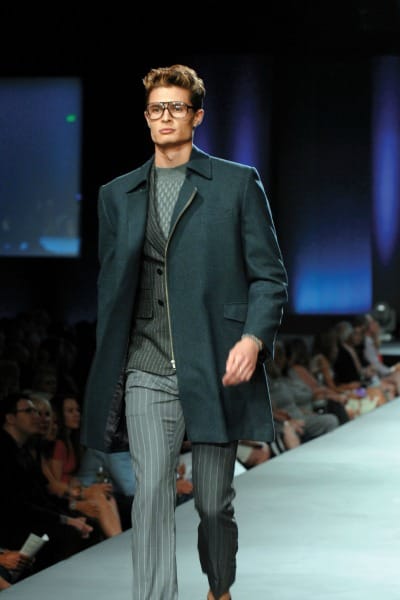 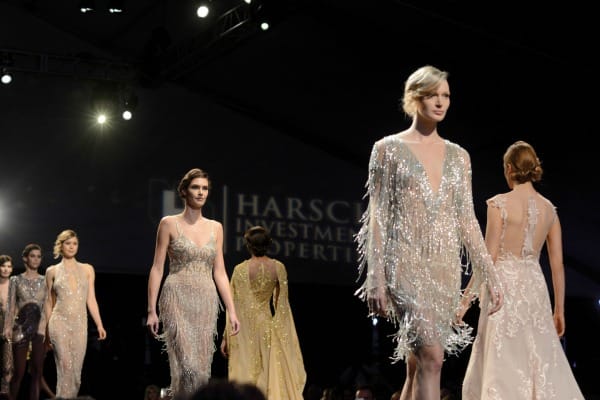 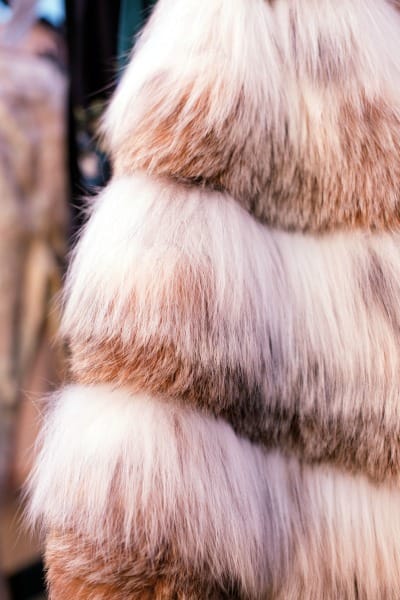 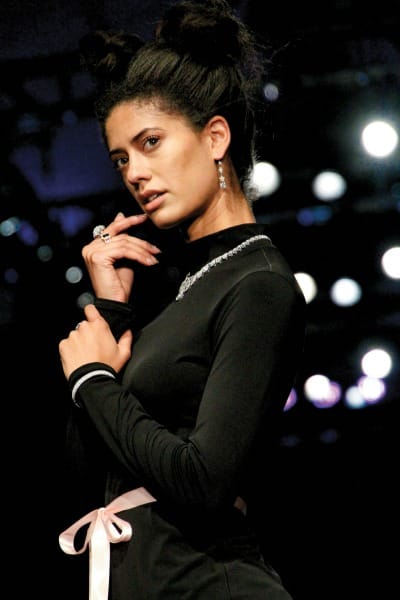 But let’s be real here: It’s all about trend-hunting. And this year did not disappoint. Creamy neutrals and solid blacks were nowhere near basic with provocative draping and multitextured textiles. An otherwise muted pallette got punched up with metallics and a judicious use of this year’s favorite accent color: siren red.

Fashion Week delivered dapper styles for the fellows too, and gauging by sheer volume of spectator cheers, the menswear may have been the overall crowd favorite. (Although it’s difficult to determine whether the squeals stemmed from the sight of impeccably tailored garments or the audience’s proximity to the hipster hunks who donned them.)

Vancouver-born, Milan-based Bates, who designs artisan wear for the cosmopolitan gentleman with sumptuous fabrics spun in Italy, was first to take the Fashion Week stage. It was his first major U.S. show. If you leaned in, you’d have noticed his trademark kiss print adorning a starched white collar. The touchable knits, turtlenecks, heavy long-sleeve coats, and driving gloves may not be desert weather–appropriate most months out of the year, but local chaps can take a cue and ditch the khaki trousers in favor of ankle-baring slacks in camel or plum. You don’t have to be a woman to show a little leg. 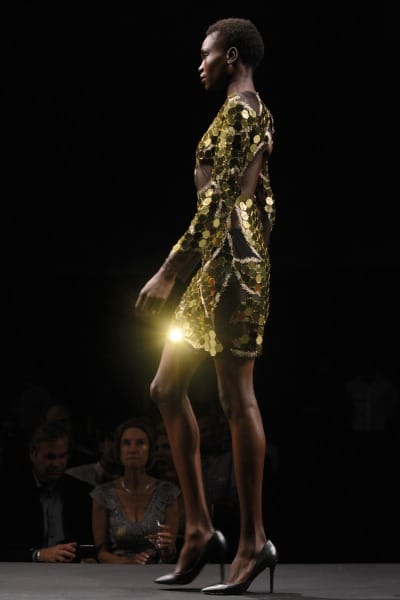 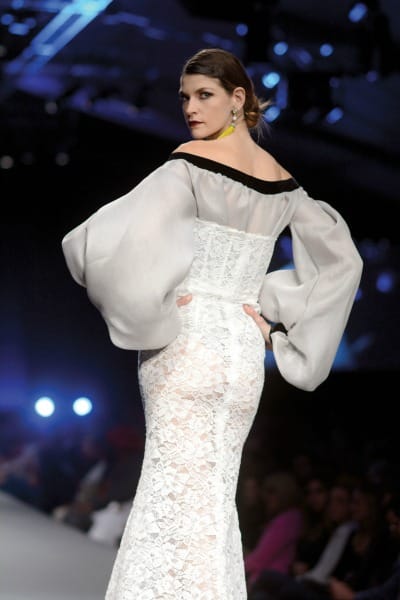 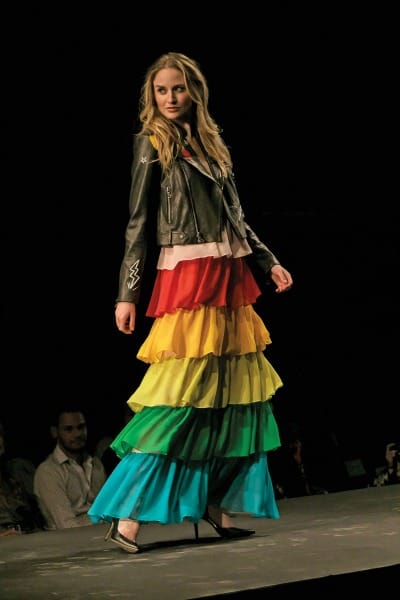 Lippes paraded a range of wearable shapes in forgiving fabrics. He jumped on the pop-of-red bandwagon with a fiery accordion maxi dress that framed the décolletage with a single strip of buoyant ruffles that seemed to float in slow motion down the catwalk. It was clear from Lippes’ show that the billowing, waistless tent-dress is here to stay. Like many designers this year, Lippes proved it’s OK, if not preferable, to toy with unexpected materials — stretch denim and supple lambskin provide a structured silhouette that feels of-the-moment while remaining breathable and breezy. Though it didn’t make the runway, Lippes offered a knockout pair of wide-leg canary yellow lambskin pants at his trunk show.

Mikael D entwined willowy Gatsby-fantasy dresses bedecked in crystal with moments of coquettish bridesmaid flounce, then ended his collection with two pouf dresses for the princess bride. With his precision craftsmanship and attention to detail it’s no wonder the gauzy gowns are all over the red carpet. But the translucent, booty-baring sheaths should probably stay in La La Land and far, far away from your body unless you also invest in an opaque slip. Take note, though: a muted color scheme plays well with tactile embellishments. It’s all about texture. 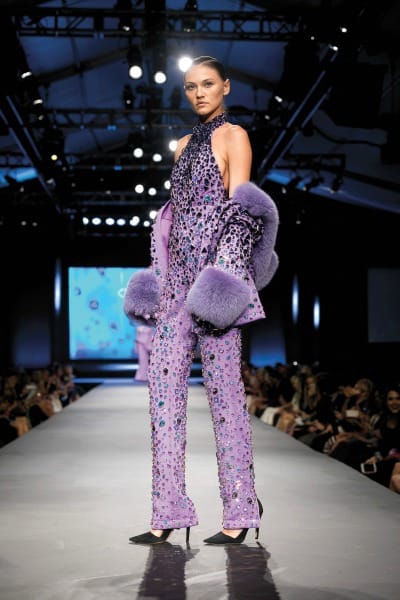 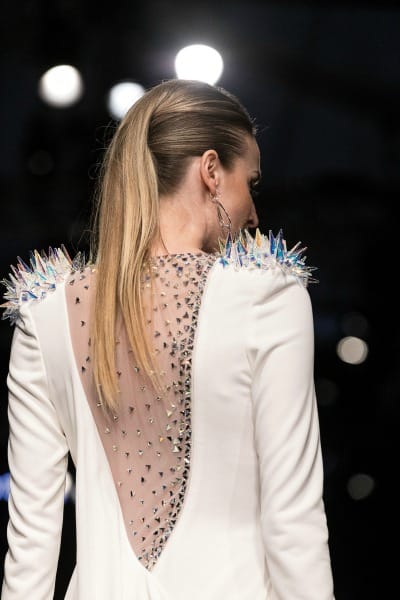 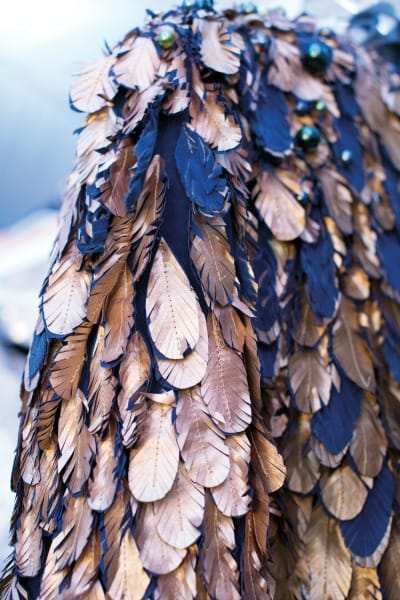 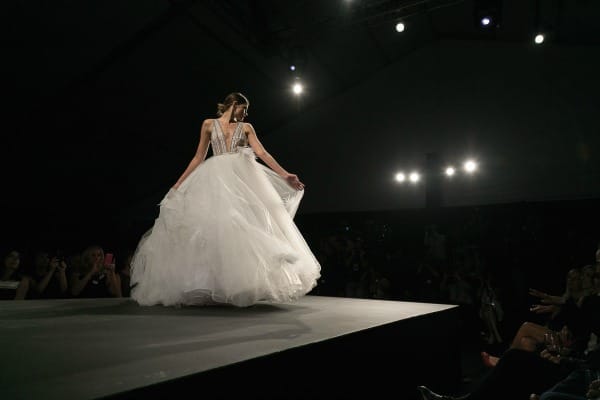 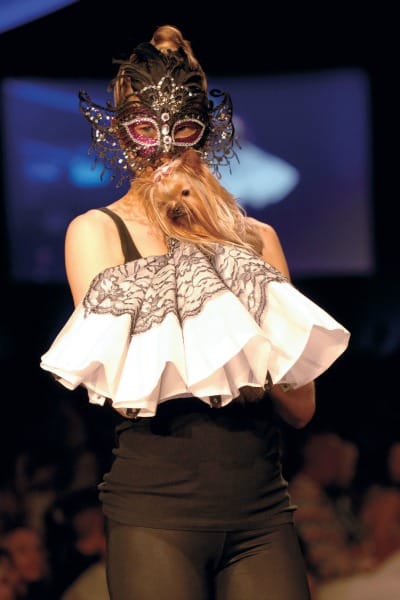 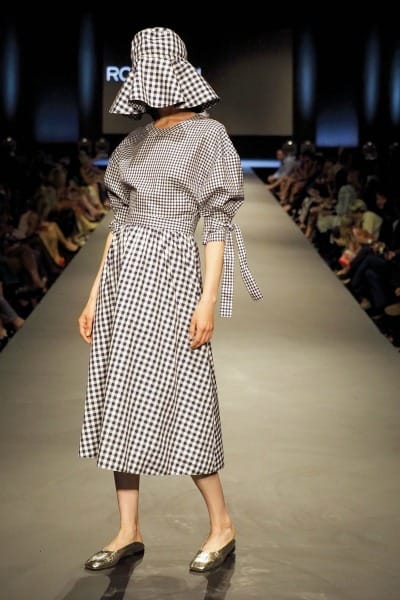 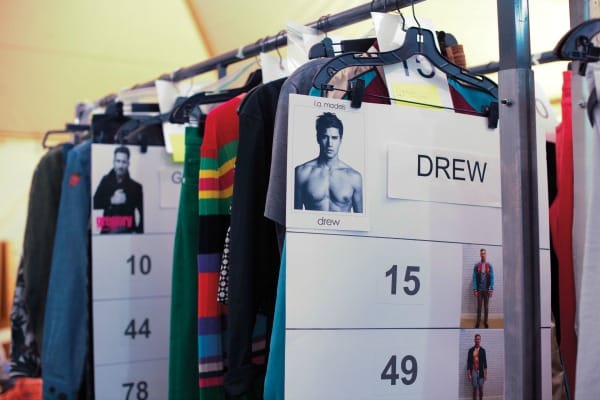 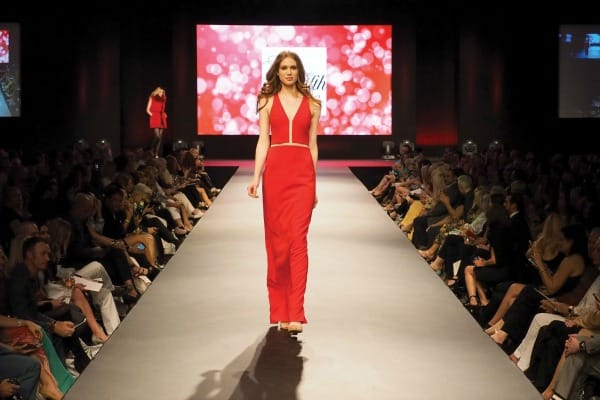 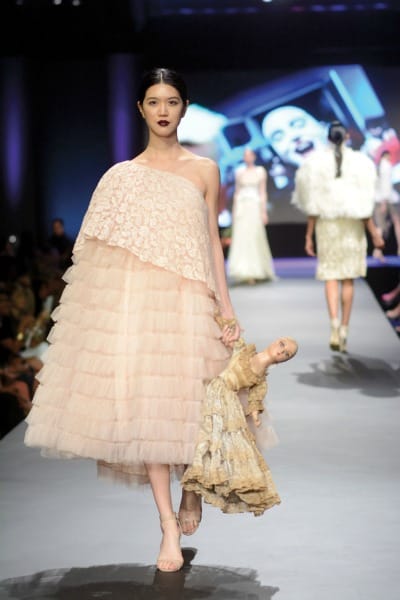 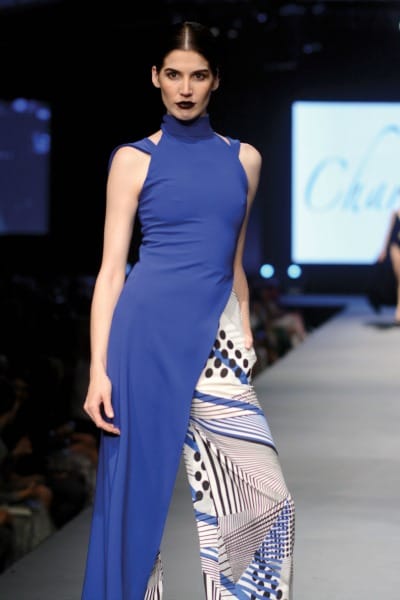 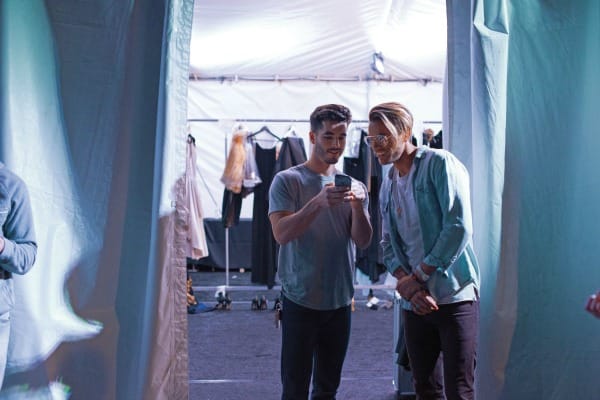 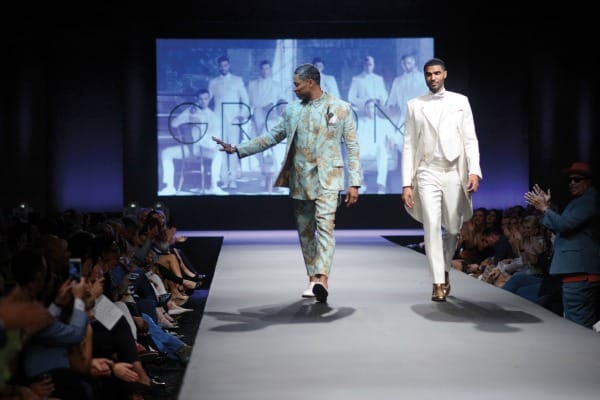 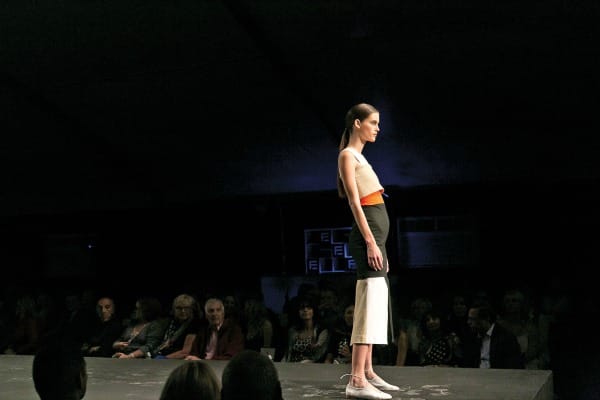 The Monday night El Paseo exhibition unfolded a procession of globally inspired apparel and accessories from 12 shops on the strip, including a flood of diamonds from Fashion Week sponsor El Paseo Jewelers. In true Palm Desert fashion, the playful production peacocked athleisure, resort and brunch wear, printed maxis and jumpsuits, and eveningwear fit for fundraisers.

If you’re looking to sex things up (or perchance have a gig scheduled at the Grammys), you can always count on Costello and Palu. Costello’s Afro-sporting models stomped the runway in super-flare lace bell bottoms, double-balloon sleeves, and legless onesies covered merely in cascading mesh robes. One can only imagine the wild exploits to be had in Costello’s threads. He also showed his latest menswear line, equally enrobed in black. His final shaggy-haired dandy disrobed a lustrous gray trench lined in siren-red to reveal rock-hard eight-pack abs. The ladies in the audience lost it. In similar fashion, Palu’s dominatrix-does-brunch narrative culminated in a black boudoir lace gown with a racy front slit, topped off with a giant scarlet fur coat, which his model stripped and dragged triumphantly across the stage. That coat was a fan-favorite for try-ons at Palu’s trunk show the following day.

Even the seven graduates of FIDM / Fashion Institute of Design & Merchandising, who maintain incredibly diverse sartorial points of view, stayed the neutral course.
Duston Jasso opened FIDM night midweek and tantalized with slinky white fabrics hand-dyed, as if with watercolor paints, in soft hues of azure and emerald. His ethereal, oceanic collection evolved with the exponential addition of handcrafted gilded denim adornments shaped like feathers, culminating in a high-neck racer-back mermaid gown completely covered in the ornamentation.From afar, it gave the impression the dress was coated in crackled gold leaf.

FIDM alumni Beau Lawrence and Octavius Terry-Sims presented menswear. Both surprised with the addition of two androgynous women’s ensembles. Terry-Sims presented Groom: white on white on white tuxedos, which onlookers adored. His standout look paired a milky white double-breasted vest with shorts and gartered socks. Yes, Terry-Sims, you thoroughly get Palm Springs. Lawrence’s was perhaps the most accessible men’s line to hit the catwalk. He does blue-collar basics and he does them well. Down-home Americana jeans, tees, and scuffed-up combat boots mixed with ultrasoft cotton plaids. A barely there pop of scarlet trim edged most of his pieces, as if wrapping the story with an artfully threaded bow.

Though Getty toyed with gingham and resort-y stripes, her patterns were soft and imprinted upon a mostly monochromatic canvas with choice strokes of eggshell and chambray blue. Her sculpturally ruffled cut-out sleeves prove the best place to show a little skin this season is on the shoulder.

Color bloomed in the Best of Saks Fifth Avenue show, which presented a range of styles — including duds for the dudes — and featured a finale collection by Italian designer Etro. Minimalist looks were balanced with bohemian prints, moments of rainbow, and a peppering of siren red: a candy-apple handbag, a silky men’s bomber, a geometric black-and-red shift dress.

Greene’s Fashion Week finale production, which began in a wash of navy, white, and the palest of pinks, metamorphosed with a swell of vivid flowery hues — first, in peek-a-boo linings, then color-coated head-to-toe. Offstage, Greene is famously soft-spoken, but as a designer, he does not shy away from forthright sparkle. “I’m always inspired by the films of the ’30s and the ’40s,” he said after the show. No stranger to the ornamentation game, the mirror-maestro dazzled viewers and dropped the curtain on Fashion Week with a full standing ovation. If you dare to follow Greene’s lead and go full-on funkadelic, now is the time to lose some change on a true Greene jaw-dropper: his scintillating gem-encrusted high-neck jumpsuit in lilac, paired with a matching fur-trimmed jacket.

Fashion Week El Paseo 2017, a Palm Springs Life event, came together with approximately 150 volunteers, 220 models, and 60 hair and makeup artists. Its cast of designers thrilled. As we explore the latest in their draped neutrals and sculpted fabrics and imagine an appropriate occassion to rock a see-through Stello gown, the Fashion Week El Paseo team has already begun planning the frenzy of its 13th year, slated for March 17–24, 2018. 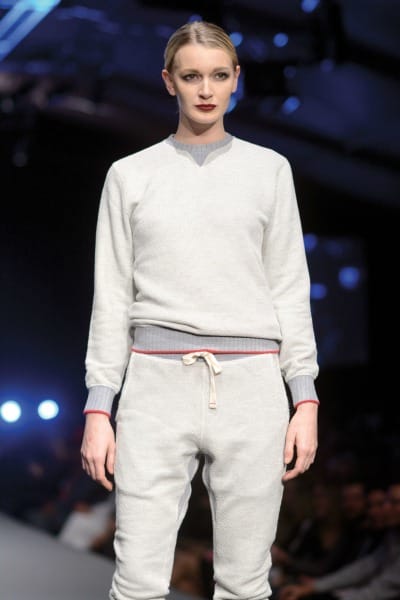 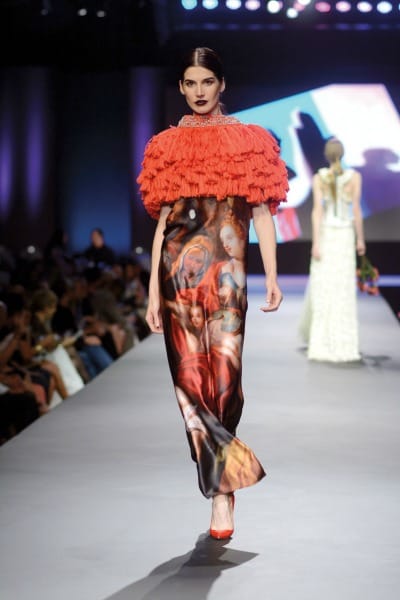