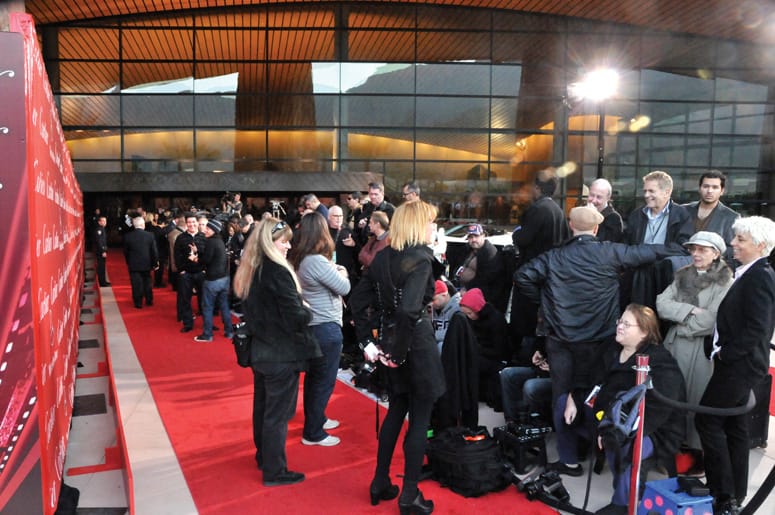 Ben Affleck, Bradley Cooper, Helen Hunt, Naomi Watts, Alan Arkin, Helen Mirren, Sally Fields, Tom Hanks, and Richard Gere. Over the years, they — and scores of other celebrities — have stepped out from their limos, onto the red carpet, and into the flashing cameras of hundreds of photographers shooting the star-studded Palm Springs International Film Festival for media outlets around the world.

This is where actors, directors, and producers have come to start the awards season for 25 years, during which the festival has grown to one of the largest in the United States. Last year, more than 130,000 attendees viewed 433 screenings and enjoyed a robust program of lectures and Q&As with directors (David O. Russell, Ang Lee, and Robert Zemeckis), parties, and after-parties.

“I think it’s really exciting to be here,” Martin Sheen, who attended last year, says of Palm Springs. “Every time you hear a roar, you know someone has arrived.”

Cooper traveled from Hungary to receive his award. “We spontaneously sang happy birthday to him,” says Mary Hart, longtime host of Entertainment Tonight and mistress of ceremonies at the festival’s black-tie awards gala.

“The key to this festival’s huge growth in popularity and prestige is the people I see attending,” Hart says. “When the stars and their handlers walk the red carpet and attend the gala, they are not expecting it to be as big, glamorous, and fun as it is. They are totally surprised by the huge media attention.”

“The Palm Springs International Film Festival and Awards Gala is consistently voted the most popular special event in the Coachella Valley, and is a huge economic tourism booster for our city,” says Palm Springs Mayor Steve Pougnet. “There’s no doubt this is one of the most important investments our city has made, and we are proud to be the title sponsor of this truly spectacular event, which, each and every year, puts Palm Springs on the international stage.”

Other community and business leaders lending support in the early days were Ric and Rozene Supple, owners of Camelot Theatres in Palm Springs.

“We got involved in the second year because Rozene was a big movie buff,” says Ric, who chaired the festival in 1994 and 1995. Rozene took the reins for the festival’s 10th anniversary. Others included Desert Hospital’s Kay Hazen, Mark Matthews of the Desert Hospital Foundation, movie theater executive Marshall Stone, and David Kaminsky, a medical doctor and film expert.

There were also less-optimistic personalities, including mega producer and part-time Palm Desert resident Jerry Weintraub. “I told Sonny 52 times not to do it,” Weintraub says. “I said it’s too close to Hollywood. I was very wrong.” Weintraub was honored with the festival’s 2008 SAG Foundation Patron of the Arts Award.

By launching the festival, Bono, who had been criticized for killing Spring Break in Palm Springs by supporting a ban on thongs, restored a shine to the city, which has since become a key destination for members of the Academy of Motion Picture Arts and Sciences who come to screen entries, especially in the foreign film category.

Ultimately, the glamorous event helped to reinforce Palm Springs as the place to go for fun in the sun while the rest of the country is in deep freeze.

“I know my friend Sonny Bono would be very proud of what his vision has become,” says Harold Matzner, the festival’s chairman and the man largely responsible for its elite status. Matzner infused his marketing expertise, Rolodex of connections, and hard cash. “The city had no other national event, and it was clear to me that a well-developed, first-rate awards gala could command national attention. The media coverage we’ve generated with the Awards Gala draws the big names, and those big names draw the media.”

This year’s Award Gala $20,000 platinum tables sold out before honorees were announced.

People love coming to Palm Springs and seeing celebrities, says Judy Vossler, a Greater Palm Springs tourism executive and festival board member who has attended the event every year. She recalls one unforgettable moment: “I was walking through the gala and came face to face with Sophia Loren. I never would think I’d see her in Palm Springs.”

In 2012, George Clooney, honored with the Chairman’s Award for Acting, Directing, Producing and Writing, charmed crowds on the red carpet. Carmen Mraz of La Quinta recalls her close encounter with the actor. “I saw him leaving the red carpet, and he was alone for a moment. I made a run for it, shook his hand and told him I was a major fan. He said, ‘Hello, sweetheart, how are you?’ I froze, couldn’t say a word and ran away,” Mraz laughs.

Celebrity photographer and festival board member Michael Childers says the festival has improved in lockstep with the changing face of Palm Springs. “I came on [the board] in 2000 and have seen tremendous excitement and growth in the festival, and a renaissance of Palm Springs,” says the winner of the 2013 Crystal Lens Award For Lifetime Achievement in Hollywood Photography.

Palm Springs Life Social Editor Gloria Greer has interviewed Hollywood royalty at the festival — Sophia Loren, Kirk and Michael Douglas, and John Travolta. “Sophia Loren was a great thrill” Greer says. “She was so gracious and down to earth.” Loren was the sole honoree in 1994 when, Greer says, “There weren’t any paparazzi around.”

Palm Springs in January has become an important stop during awards season, with more than 350 media coming to town.

“I’ve seen the caliber of filmmakers, celebrities, and press attending the gala and on the red carpet grow so much, it has become the event studios want a presence at to get publicity for their films,” says Lea Yardum, an awards consultant for Paramount since 2005.

Darryl Macdonald, festival director since 2004 and the man Matzner says deserves a large part of the credit for the success of the festival, says, “The influence this festival has had on the Foreign Language Film category of the Academy Awards is huge. Ever since the festival’s first year, when Cinema Paradiso won the Audience Award here, then went on to win the Foreign Language Oscar, and that was followed up with the same thing happening to Mediterraneo the following year, the link between this festival and the Best Foreign Language Film award winners has been a continuing motif.

“Over these last 24 years, there has only been one year when the winner in this category has not been showcased at the Palm Springs International Festival before winning the Oscar — a remarkable track record for any film festival,” Macdonald says.

According to the website Indiewire, “Nowhere else can you get such a comprehensive lineup of Best Foreign Language Oscar contenders. … The event’s desert sunshine, pools, golf courses, laid-back vibe, and proximity to Los Angeles are a natural draw for Hollywood (and non-Hollywood) brass.”

At press time, organizers of the 25th annual festival had announced four of this year’s honorees: Matthew McConaughey, Sandra Bullock, Bruce Dern, Julia Roberts, and Steve McQueen. Cartier is the presenting sponsor of the Awards Gala, and top-tier sponsors include Mercedes-Benz, Entertainment Tonight, and the city of Palm Springs. The list of presenting and major sponsors grows longer year after year.

Proceeds from the awards gala, which nets about $1.5 million, go back into the film festival and its education programs, says Matzner, who joined the board in 2000 and is one of the Award Gala’s five individual underwriters, along with James Houston (gala chair), Helene Galen, Donna MacMillan, and JoAnn McGrath.

The festival has become known for premiering films from directors who achieve success, including M. Night Shyamalan (The Sixth Sense), John Madden (The Best Exotic Marigold Hotel), and Alfonso Cuaron (Gravity). This sense of discovery has fueled the festival’s reputation, reflected in its New Voices/New Visions showcase and the vast number of international films it has introduced to American audiences over the years.

Palm Springs certainly reaps the rewards of hosting the festival. It fills hotels, restaurants, and attractions such as the Palm Springs Aerial Tramway and the Indian Canyons.

John Raymond, director of community and economic development for the city of Palm Springs, says, “January 2013 was our best January ever, with $1,453,092 for the month in transient occupancy taxes. Though there is no way to directly track the relationship between visitors who come for the festival, it was no surprise last year that [the festival] also had its best year in attendance and ticket sales.

“The festival is a great shot in the arm for the city,” he continues, “particularly because it happens so early in January, right after the holidays.”

The Coachella Valley reaps more benefits from the festival.

“We’ve seen 20 consecutive record-breaking years of growth from the festival,” says Scott White, president and CEO of the Greater Palm Springs CVB. “It promotes the area as a destination and increases awareness globally by putting the spotlight on the entire valley.”

On the Red Carpet

2013: Sally Fields: “I haven’t been here in years and when I do come here it always makes me smile.”

2013: Helen Mirren: “Palm Springs is a lovely place to come and they do this lovely thing of honoring you.

2013 Ben Affleck:  “I get to come and hang out and chat with the people responsible for all the great movies I saw this year.”

2011: Natalie Portman: Amazing people whose work I admire so much. It’s wonderful to be in the same room with them.”

2011: Colin Firth: “To be here in this Desert oasis is rather magical”

2011: Jake Gyllenhaal: You never really know the magic that makes something magical but clearly it has it here.”