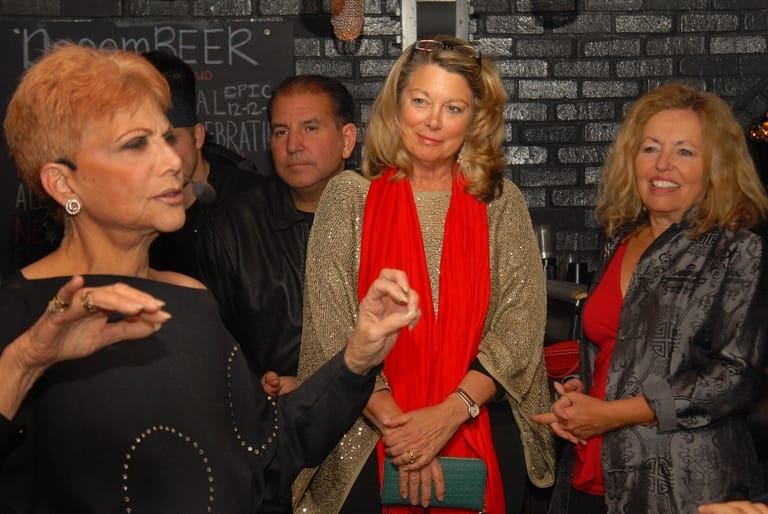 She was right on the cusp of stardom. Everyone said so.

But when Linda Gerard took a look at what awaited her, she walked away and never looked back.

As the understudy to Barbra Streisand in “Funny Girl” at the Winter Garden Theatre in New York in the early 1960s, Gerard saw the downside of being a star. Everywhere Streisand went she had bodyguards by her side. People clamored for her, wanted to touch her, and get a piece of her for themselves.

As Streisand’s understudy, Gerard dealt with a different kind of attention.

“I would get crank letters,” Gerard said. “’We know who you are. We know you’re just waiting for Barbara to get sick’. It was nutsy people. ‘We’ll make sure you’ll never go on because we only want to see Barbara’.”

Gerard had twin daughters at the time, and she found herself looking over her shoulder in public. “It got to me,” Gerard recalled. “I wasn’t feeling safe. It got frightening.”

Gerard stayed with the show as a standby after Streisand left and Mimi Heinz was hired. She left in 1967 and played Fanny Brice in productions around the country for the next eight years. Despite encouragement from “Funny Girl” producer Ray Stark and raves from New York Post syndicated columnist Earl Wilson, Gerard decided to go in a direction that was good for her. In 1975, she was hired to sing during the summer at a nightclub in Provincetown, and within a year, she had moved to the Massachusetts town.

By the late 1980s, Gerard relocated to California and was running a nightclub in Los Angeles. Streisand came to the club one night to see her sister, Roslyn Kind, sing with Gerard.

“Barbara still had bodyguards,” Gerard said. “Who would want to live like that?”

Gerard moved to Palm Springs in 1993 and has been at the Ace Hotel & Swim Club since just after it opened in 2009. Now 74, Gerard’s career has had an unexpected boom since she began hosting Sissy Bingo on Monday nights in the hotel’s King’s Highway restaurant.

The hotel recently compiled an album of the singer’s hits from her early days called “Fabulous Selections”, and last month held a debut party where she autographed copies for fans.

Who influenced your singing?

“As a kid, I always listened to Judy Garland records. Recently, I watched some of Liza’s (Minnelli) old tapes when she was really, really good. I was impressed. I never really thought about anybody but Judy. When I watched Liza, they were good. Not as good as her mother. Shirley Bassey, a singer from Wales, was a wonderful talent. My father always said I was like Ethel Merman. He loved that I could sing out. I have a much smoother sound than her. I liked her work; what a character she was.”

Did you come from a family of entertainers?

“Not really. When I first started entertaining, I came from orthodox Jewish people. My father thought you were a slut if you were in show business. You were a bum, no good. It wasn’t until I played the Copacabana in New York with a full orchestra that he even came to see me perform in New York. Once I got into Broadway shows, he thought that was legit but not the nightclubs. My mother wanted to be a singer when she was a kid. She was a school teacher, so she lived her life through me. She would come to see me in the clubs, but never my father.”

Do you have a favorite Streisand story?

“One day she was really late showing up to do “Funny Girl”. I was standing back stage. I was wearing these big black sun glasses. She loved them, so I gave them to her. That night when the show was over, she told me not to leave. She said I have something for you. She gave me this gorgeous black jump suit. We were both in our 20s. We were babies. We didn’t have this animosity or anything that she had toward me or me toward her. She was the biggest star in the world, and that was fine with me.”

Why has Palm Springs been a good place for you to be?

What was the worst piece of advice you ever received?

“Never lend money. My father always said, ‘Never a borrower or lender be’.”

“Don’t take anything too seriously. Life goes way too fast. You can’t take criticism that seriously, you can’t take love affairs that seriously, and you have to take life like you’re on easy street. A year ago, I got very upset about something and was rushed to the hospital. My blood pressure was over 200. They told me I can’t stress about things, and that was the problem, stress. That’s life. You get your ups and down, and you just go with the flow.”

To purchase the album, visit www.shop.acehotel.com