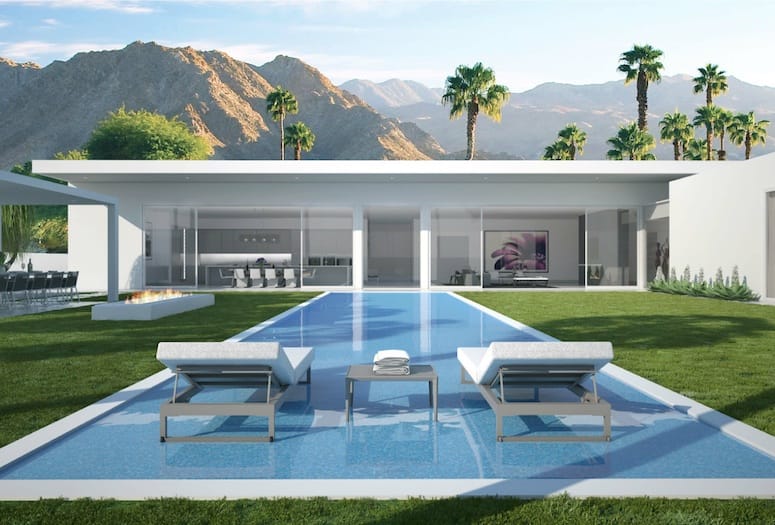 A conversation with Andrew Adler, the CEO of Alta Verde Group, is unlike one you’ll have with any other builder.

Of course, you would expect him to be passionate when expounding upon his latest project, Linea. But his passion goes well beyond any sort of sales pitch. Linea is really the epitome, and the culmination, of Adler’s philosophy on how we should be living and the role of architecture in our everyday lives.

“Our [Alta Verde] houses are form first over function, that’s the primary directive,” says Adler. “And then we ideate into functionality. We don’t just start with a floor plan and then figure out how to get a facade on it. We start with a sculpture, the house has to look beautiful, there has to be an aesthetic inspiration first. [So we] take a piece of sculpture and transpose it into a living environment.” G FLOOR PLAN: Andrew Adler says the G floor plan is “about purist, clean space—about perfection and alignment. I want people to open all the glass. I want them to feel like the mountains are literally in their bedroom.” While really a five-bedroom house (including the guest house, which is aligned dead center with the pool), the main portion of the home is essentially three bedrooms with one of the largest master bedrooms you’ll ever see — 20 feet by 30 feet. The master bathroom/closet is also an extraordinary experience — basically as big as the master bedroom—with a walk-in shower, spa-like stream room, and 12-foot vanities. There’s also a separate media room that Adler thinks of as flexible space. “Everyone has different needs and one of these plans will fit everyone in our demographic,” he says. “Someone may use it as an office, someone else may want the doors down and use it as part of a gallery and hall experience. I think [the] whole house is a gallery. It’s got a massive amount of wall space and a massive amount of light, hence the ‘G’ plan.”

“[Linea is an] evolution of the type of architecture that I’ve always done in cities,” he adds, “which largely I refer to as eroded cubism: Start with a box, a structure, a sculpture if you will, as opposed to worrying about program and plan.”

Adler partnered with Los Angeles architect Anthony Poon of Poon Design Inc. on the design of the homes and Linea is beginning to take shape on an eight-acre site on Bogert Trail in the Andreas Hills neighborhood of Palm Springs. The first three of 14 homes — each 5,000 square feet and sitting on half-acre lots — will begin to rise in December and will be priced from $2.5 to $3 million.

“They’re [the lots] just suitable for what I wanted to do, which is to build pure white architectural estate homes,” says Adler. “An all-white development, not another color in it. [And] there’s an art to the way it’s laid out. It’s all about symmetry and linearity, hence why it’s called Linea. “Everything is about being low slung and really grand horizontally, not about being grand height wise—the mountains take care of that.”

The guest house, shown at the rear in this G Home rendering, is almost 600 square feet. It has its own entrance and parking area.

Standing on the site of the future homes, you’re surrounded by unobstructed, panoramic views of the mountains. Adler notes that he didn’t believe that the best homes should be up on mountains looking down at rooftops, rather they should be on the ground looking up at mountains.

The architecturally beautiful facade of the G Home.

“They’re simple, they’re sculptural,” says Adler. “[It’s] architecture that brings us forward—how simplicity translates to a lifestyle. Architecture is a confluence of art, culture, and being livable and you have to take those three things together and still make it feasible.”

G HOME — The media room/gallery is flexible space that can adapted to each homeowner’s lifestyle and needs. T FLOOR PLAN: The main room of the T floor plan has a completely air-flow-through feeling—definitely not your typical indoor/outdoor connection. You enter a space that is a square block and is open on both sides. “You will feel like there’s a roof over your head and you’re outside,” says Adler. “I’ve always had this idea in my head of a house that kind of breathes. I want to live in a space that feels like when I’m in it, it feels like I’m outside.” The kitchen, which spans the entire length of the main living space, will have enough room for 12 bar stools. “I consider that if the gallery [G floor plan] is a cerebral house about balance and symmetric beauty and a place for art, this is a fun house,” adds Adler. The home will also feature a temperature-controlled wine room as well as a master bathroom with two vanities with a glass sheet/mirror between them, a steam room, floating bathtub, and a 30-foot line of closet cabinetry.

‪This view of the backyard shows how the T Home is open on both sides of the main living space and has a completely air-flow-through feeling‬.

The front elevation of the T Home.

T Home kitchen/dining/living room: The kitchen spans the length of the main living space and is the centerpiece of social activity in the T floor plan. L FLOOR PLAN: The L floor plan is designed on a vertical axis directly through the middle of the home. “You take that vertical direction straight through the yard and the house splits in terms of program and wraps around it,” says Adler. “Open the front door and you’re looking straight out at 60 feet of water. What that does very deliberately is when you have two structures that look into each other, one of public orientation [the guest house] and one of private orientation [the master bedroom] is I wanted a divider. It creates two sanctuaries and two blocks of space across from each other that are the same size.”

L Home kitchen/dining/living room: “Compared to the other two plans, this is about two really big spaces,” says Adler. “They’re on the same axis but they’re two modules divided.”

‪A rendering of the master bedroom in the L Home.‬