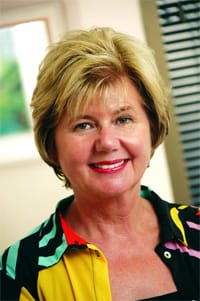 The first thing you notice about Dr. Elke Jost-Vu is that she listens when you speak. An endocrinologist and medical director of the diabetes program at Eisenhower Medical Center, Jost-Vu specializes in a field whose warning signs are often predicated by subtle shifts in chemistry. It’s the way she uses what she hears to begin unlocking the malady that makes her willingness to listen such a key trait — one too often misplaced within the medical community.

Jost-Vu has been looking for signs for the better part of her life. "In my last year in high school, that’s when I really became interested in medicine," she says.

Growing up in her native Germany, Jost-Vu was always fascinated by biology and chemistry. But it wasn’t until ex-tensively researching lipids in medical school that she became captivated with endocrinology, which focuses on the endocrine glands and hormones, in-cluding diabetes and thyroid disease.

Upon graduating from the renowned University of Heidelberg Medical School, Jost-Vu received a research fellowship from the University of California, San Francisco. She spent three years studying lipids at the Cardiovascular Research Institute before interning and then taking up residency in Bakersfield. After two years on another research fellowship in endocrinology, Jost-Vu opened her private practice at Eisenhower Medical Center in 1991.

"I’m very much attuned to solving problems," Jost-Vu says. "My research background makes me want to always get to the root, to see where it all stems from. It’s a mystery and it’s a challenge, because no two patients are the same. I see sick people, and my satisfaction is to make them feel better — to get their blood sugars under control or get their thyroids under control. Everything in endocrinology — even the most simple issue — you always have to look at the numbers, look at the patient. You have to see if the patient’s symptoms are compatible with what you see in the lab report and analyze it all."

Though she says she rarely stops being a doctor, Jost-Vu does try to pause long enough to appreciate the world around her, even if it’s only a quick jaunt to one of her favorite restaurants, a rigorous hike, or a drive to the coast to sit idly by the ocean with a good book.

With a 17-year-old daughter bound for the University of California, Berkeley in the fall (with an eye toward becoming a physician), might one foresee a family practice? "That’s a long, long way off," Jost-Vu says with a laugh, "and I’ll be too old!"

In the meantime, the doctor says she’s as passionate for medicine now as she was the first day she stepped into medical school. "I can’t imagine I’ll ever retire," she says, "or that I’d ever want to."