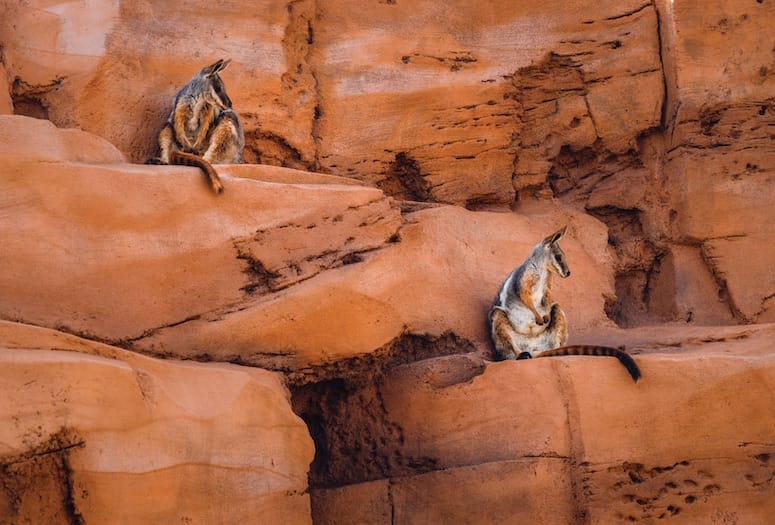 It started on the back of an envelope. In 1970, when Karen Sausman was hired as the first director of The Living Desert Zoo and Gardens — known at that point as The Living Desert Reserve — the plucky naturalist and educator mapped out an ambitious plan for a sprawling campus in the heart of the Coachella Valley showcasing flora and fauna from across the world’s deserts.

Inspired by the Arizona-Sonora Desert Museum, which solely focuses on the Sonoran Desert, Sausman envisioned a like-minded institution in Palm Desert where visitors could learn about and experience the connections between what thrives in Southern California’s stretch of the Colorado Desert and elsewhere on the planet. It would be unlike any other zoological attraction in existence.

“I told the original board [of trustees] that we can’t be another Arizona-Sonora Desert Museum because we’re in the Colorado Desert, and if we limit our scope to the plants and animals of one of the driest deserts in the world, it won’t be that exciting,” recalls Sausman, who first worked on the reserve out of her van. “There’s no point in repeating the Arizona-Sonora Desert Museum in Palm Desert. Instead, let’s explain how plants and animals adapt to living in the desert, whether they’re in Southern California, South Africa, or Alice Springs.”

• READ NEXT: Check Out the Surprising Facts About The Living Desert.

For the next four decades, under the intrepid direction of Sausman, The Living Zoo steadily added exhibits featuring animals from all over North America and Africa, including cheetah, gazelle, zebras, leopard, and tortoise. The final piece of her master plan: Australia. (Sausman notes that while there are desert biomes in Asia and South America, they’re too cold at night to be properly replicated in the Coachella Valley.) It wasn’t until after Sausman retired in 2010 after 40 years of service that a blueprint for an Australian exhibit was fully realized 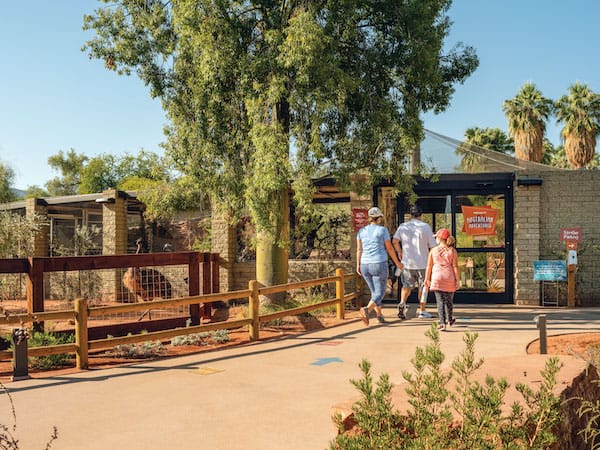 “I had the dream from day one, but I didn’t share it [with the board] at first because I thought they would tell me I was the wrong person for the job,” says Sausman, who worked as a Joshua Tree ranger and junior high school teacher in Palm Springs before joining The Living Desert Reserve. “I wasn’t being duplicitous. We built what the board was comfortable with supporting — never more, never less.”

After more than a year of construction, The Living Desert scheduled its Australian Adventures pavilion to open in March 2020. But a few days before wallabies, tawny frogmouths, short-beaked echidna, and other critters from Down Under were set to meet the public for the first time, the zoo was among many attractions ordered closed to curb the spread of COVID-19.

“It’s been a year of highs and lows,” acknowledges Allen Monroe, current president and CEO of The Living Desert. “Last year, we exceeded 500,000 visitors, but then COVID-19 stopped us in our tracks. We spent almost three months without general public visitation. But, of course, unlike many other businesses that can just turn lights off and shut the doors and walk away, we had a commitment to all of the animals that are here in the park.” 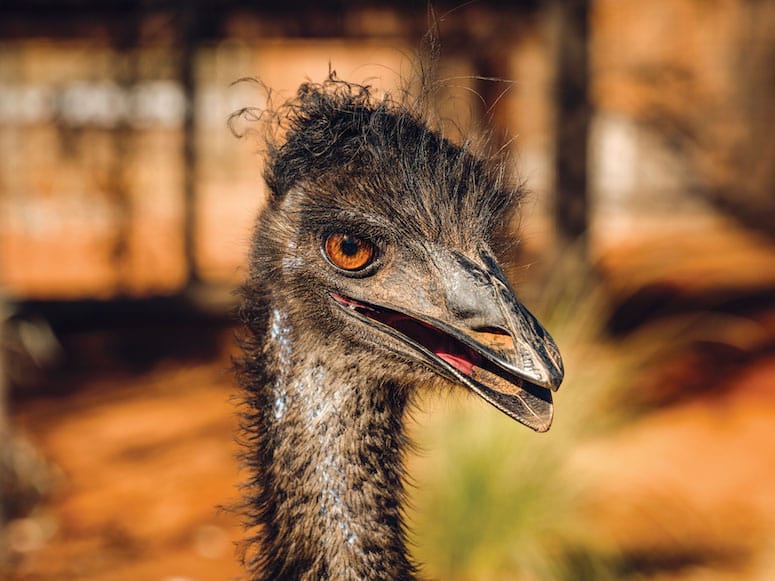 The unexpected closure presented several new challenges for the remaining animal keepers. The Living Desert, which operates as a private non-profit organization relying primarily on donations and ticket sales, lost about two-thirds of its staff, and those still on board were forced to be creative about how to care for the nearly 500 animals that reside at the facility, which also includes an animal hospital with two full-time veterinarians. One of the first steps was to condense several habitats — a feat that proved particularly cumbersome when it came to consolidating camels.

“We decided to move our four younger camels in with our two older camels to make it easier for our team to care for them,” explains animal care director RoxAnna Breitigan, who’s been with The Living Desert for five years. “We were trailer training them for a few weeks and were able to move three of them, but Big Mike — for whatever reason — decided he was not going to get on that trailer no matter how much lettuce we threw at him.” Eventually, Big Mike relented, took the trip to the other side of the park, and was so enthusiastic to be reunited with his pals that he galloped toward them, a memory that still makes Breitigan chuckle.

Once the three-month lockdown was lifted, the 80-acre campus welcomed back visitors June 15 with, of course, several new social distancing measures in place, including limited attendance, face covering requirements, and partitions to spread out and separate foot traffic. “When we reopened, we were pleasantly surprised that people were anxious to come back and see us,” Monroe says. “There was cabin fever. The good news is that the service we offer — an outdoor walk-through experience — is pretty easy to do in a safe fashion.” 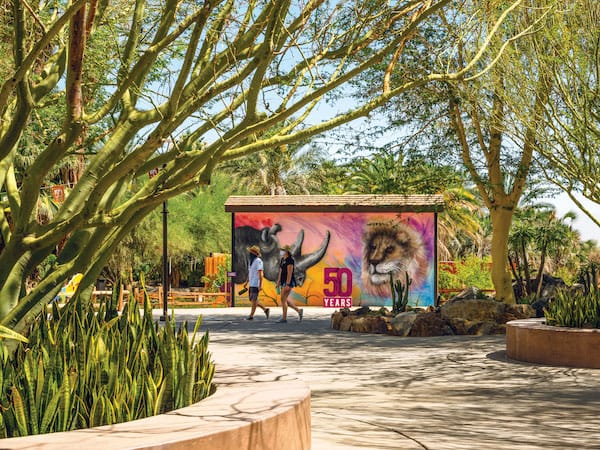 The reopening served as the debut of the $3 million exhibit Australian Adventures, the zoo’s first new habitat since jaguars were added in 2011. The open-air structure features Bennett’s wallabies hopping amongst guests on grass and yellow-footed wallabies bouncing across rock formations. (Sorry, koalas aren’t desert dwellers, so you won’t find them here.) Bird species such as laughing kookaburra and indigenous reptiles like olive and Centralian carpet pythons round out the Aussie population.

“We wanted to make sure it was dynamic, interactive, and different,” Breitigan says. “When we were designing it, our thought was that guests are coming into the wallabies’ home. That space is where they live. We don’t lock them in at night. They can be wherever they want. They have the run of the place, which is very different from how things are normally done in zoos.” 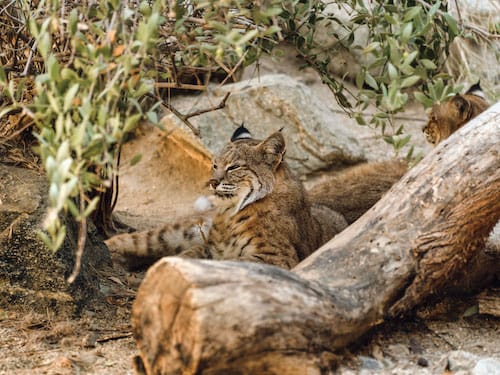 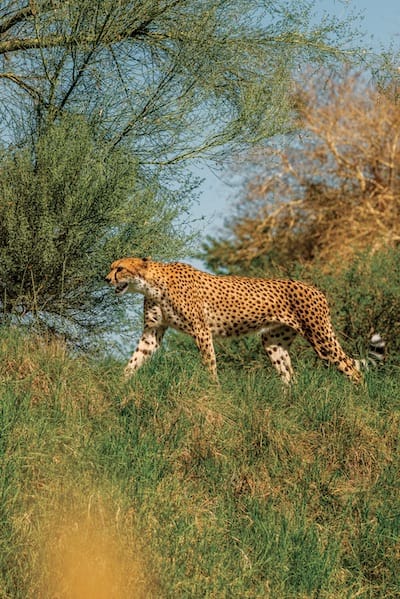 FROM THE BEGINNING, the mission of The Living Desert has been distinctly different from most other zoological institutions, which typically amass exotic animals from every corner of the earth. The Living Desert, however, never strays from the desert.

In the 1960s, the forward-thinking first board of trustees of the Palm Springs Desert Museum — now the Palm Springs Art Museum — originally tapped Sausman to protect a large swath of land off Portola Road from the widespread development that was happening across the Coachella Valley. She began by modestly carving out hiking trails (with the help of Boy Scouts) and creating guides with information on local species.

“When I first started, I’d go out fundraising to rotary clubs and other organizations and tell people, ‘We need to save the desert.’ They’d respond, ‘Save it from what?! There’s nothing here,’” Saussman says. “There wasn’t much in Palm Desert at the time. It was 15 miles away from Palm Springs with a little town called Cathedral City in between. That was it.” 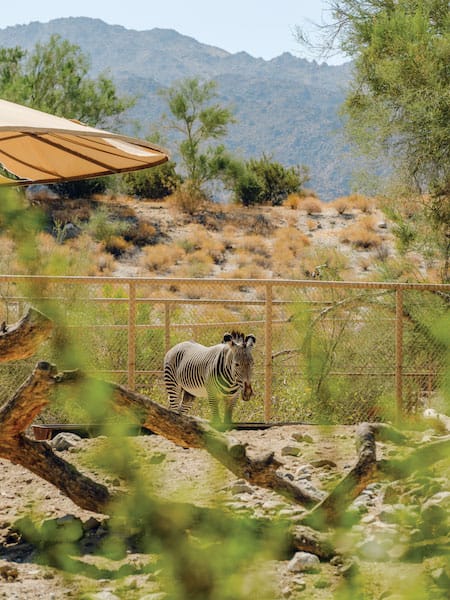 Grevy’s zebra hangs in his habitat. 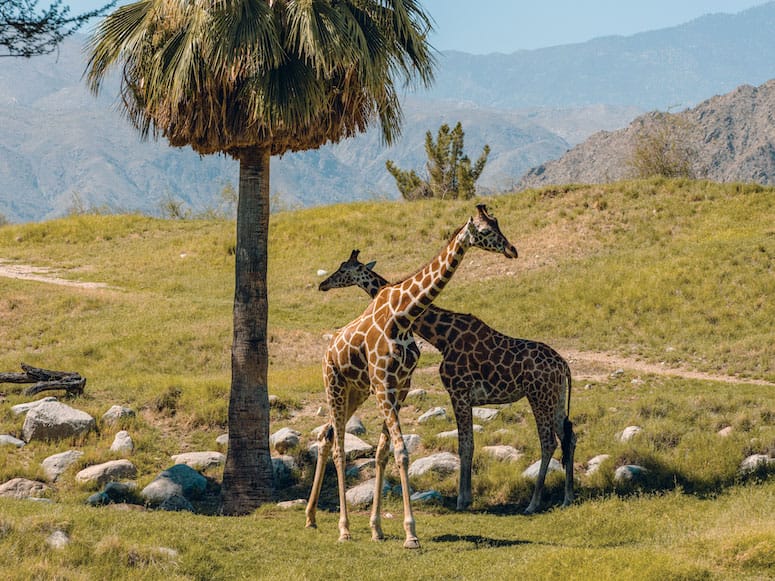 While the giraffes, bighorn sheep, and other animals garner the most attention from today’s Instagram-obsessed visitors, environmentally significant flora has been rooted in The Living Desert’s history since its inception. The 1,200 acres under the institution’s care is populated with plants like rare California sagebrush, African ocotillo, and Mexican bird of paradise. “Mr. Boyd was fascinated with botanical gardens, so the first big project we took on didn’t have anything to do with animals,” says Sausman, referring to Philip L. Boyd, the first mayor of Palm Springs and The Living Desert’s biggest advocate in the early days.

Since the 1980s, The Living Desert’s projects have included protecting endangered species. The facility is active in the Association of Zoos and Aquariums’ Species Survival Plan, a cooperative conservation program created in 1981 that serves as a sort of Match.com to ensure genetic sustainability and diversity among animal populations. The Living Desert has notably helped to protect the peninsular pronghorn and Mexican wolf, which would be extinct today if not for efforts that reintroduced animal populations in the United States and Mexico.

Sausman attributes her 40-year tenure to understanding the delicate balance of conservation and commercialism. One of her proudest achievements is that The Living Desert never made a habit of borrowing money. If the zoo needed anything — from a new bathroom to a recreation of an African village — Sausman and her team raised the funds, which is probably why it took so long for an Australian exhibit to come to fruition since she drew it up on the back of that envelope.

“My job was to manifest the board’s vision into a physical entity,” Sausman says. “They had the wherewithal to fund — modestly, by anyone’s standards — this endeavor and seek support from the community. And I made every nickel count. I made something out of nothing one day at a time, one week at a time.”

AFTER FIVE DECADES, The Living Desert now boasts a membership  of more than 13,000 and partnerships with 51 conservation organizations. Looking toward the next 50 years, current president and CEO Monroe hopes to continue breaking attendance records and boosting conservation efforts.

“When you look at photos of what this place looked like 50 years versus today, I have to assume that in the next 50 years, it will be just as transformed in a way that’s difficult to even imagine,” Monroe says. “My hope is that The Living Desert will still be able to provide a connection with people and nature. 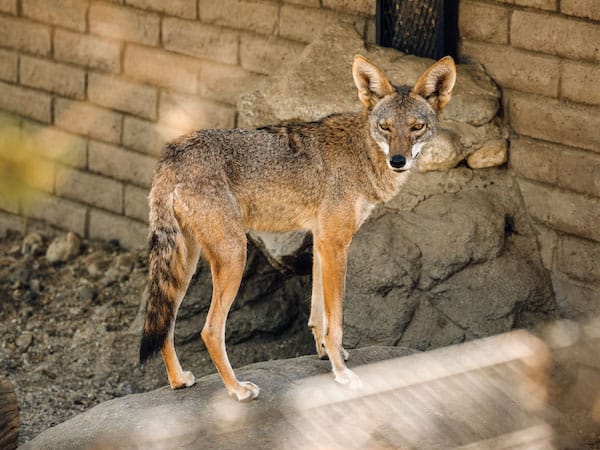 One of the zoo’s rescued male coyotes.

The challenges for our planet will be more extreme as the population continues to increase and climate change continues to affect the world. It’s up to conversation organizations like The Living Desert to make sure people have an informed understanding of those issues.”

Breitigan and her animal care team are already hard at work preparing for The Living Desert’s next inhabitants: a pair of black rhinos expected to move in November 2021.

“They will be a breeding pair who won’t always live together,” she says, “because black rhino actually prefer not to always be together, so we’re building that into our plan for their habitat.” With an average weight of 3,000 pounds, they will be the zoo’s heaviest habitants. 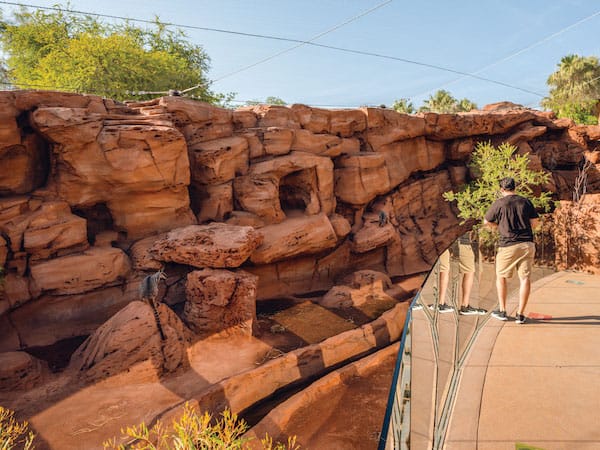 A visitor spots yellow-footed wallabies lounging in the Aussie exhibit.

The Living Desert was born — believe it or not — on the big screen.

It’s no coincidence that The Living Desert shares a name with the first feature-length film in Walt Disney’s True-Life Adventures series.

Palm Springs Desert Museum trustees Philip L. Boyd, who served as the city’s first mayor, and vacuum scion H. Earl Hoover persuaded Disney, who owned a home alongside Hoover in Smoke Tree Ranch, to use the name of Disney’s Academy Award-winning 1952 documentary for the nature reserve they were planning in Palm Desert, according to former Living Desert director Karen Sausman.

Originally, the property was called The Living Desert Reserve until Sausman requested a moniker that was more authentic — and required fewer letters.  “I asked the board to take off the word Reserve,” she recalls. “It made it sound like it was an empty piece of land. I used the example of Sea World. It’s not called Sea World Reserve.”

Sausman says she offered up a few alternatives, including directly cribbing Sea World and calling the place Desert World. “I told them, ‘If you want something short and simple, let’s just call it The Living Desert because people were always astonished there was anything out there besides a fence and a nature trail.’”

The connection to Mickey Mouse’s maker came full circle in the 1990s when Disney animators visited The Living Desert and studied its resident meerkats to create The Lion King character Timon. 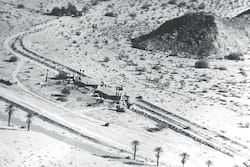 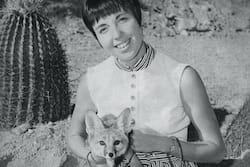 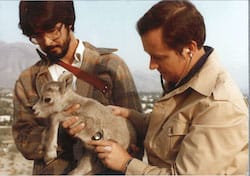 Accredited by the Association of Zoos and Aquariums. 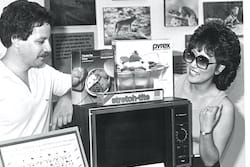 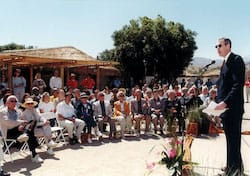 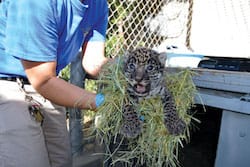 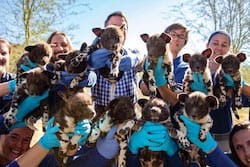 • READ NEXT: A Palm Springs Estate Inspires a Mediterranean Daydream.