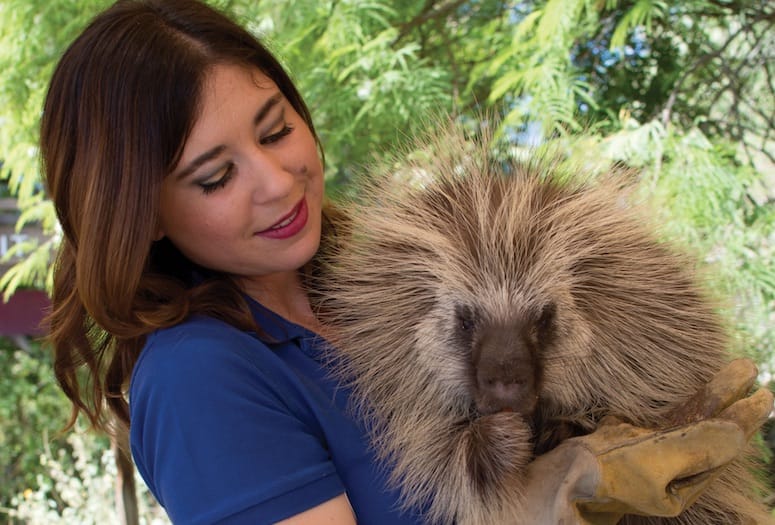 On a balmy morning just before the onset of summer, throngs of children and their field-trip chaperones clamor into the amphitheater at the Living Desert for the Wildlife Wonders show.

In the half-hour skit, animal care supervisor of wildlife programs Daniella Stage portrays an affable, albeit inept, security guard — she’s the comic relief, learning alongside the audience as the host informs on environmental issues and endangered creatures, and she gets a lot of laughs. Various critters make an appearance and do their part to teach. A goat, for instance, demonstrates recycling by picking up plastic bottles and placing them into a bin.

“You see our serval [a wild cat] do this jump,” she says. “We could  say, ‘They jump 10 feet to catch a bird,’ or we could show them. That’s what means the most to me: when you see that look on kids’ faces, when they get excited to learn.”

It’s just one facet of Stage’s gig at the Palm Desert park. She also participates in the Wildlife on Wheels program, accompanying animals to off-site locations for assemblies; conducts research into endangered species (the team is currently studying a small colony of Casey’s June beetles mysteriously found in a wash in Palm Springs); and works one-on-one to train an array of species.

Stage has become best buds with Mr. Prickles, an 8-year-old North American porcupine who has grown up at the zoo. He likes yams and apples and, not unlike a well-trained puppy, enthusiastically enjoys high-fiving for treats. Bubo the owl is another pal; he’s keen on head scratches and nuzzling foreheads.

Animal care is a passion she shares with her husband, Nicholas Stage, who works as a giraffe keeper at the park. The two met at Moorpark College, where Stage studied exotic animal training and management. She’s been with the Living Desert for nearly five years.

“I get to wake up and come work with animals,” she says. “How am I gonna have a bad day?”

“The hiking is amazing here. Personally, I love the tram. You  go up there, and it’s so much cooler. My husband and I also like to get dinner or happy hour. Casuelas Café in Palm Desert is one of our favorites.”