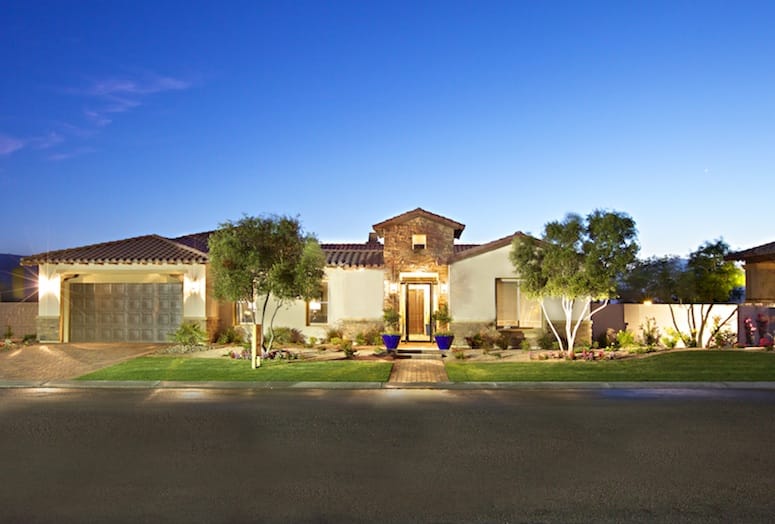 The volatility in the real estate market back in the 2000s led to many stops and starts for projects throughout the Coachella Valley. Fortunately, the stories surrounding most of those developments now have a happy ending — including Madison Estates located at the corner of Madison Street and Avenue 49 in South Indio.

The community, which originally broke ground back in 2005, was purchased by UP Madison 46, LLC in 2014. A Grand Re-Opening this month celebrated the release of seven new homes in Phase 6 of the development. The completed community will eventually have only 55 residences after the final 10 homes in Phase 7 are built.

Knitter Partners International, Inc., an architecture and planning firm based in Newport Beach, designed the Spanish/Tuscan-style houses and the builder is Jeff Petrus, who has created communities throughout Southern California. A pool and spa are included in the homes’ purchase price.

“It’s a very close-knit community,” says Paige Maccio, a sale representative for Madison Estates. “It’s almost like being in the midwest where you have those very tight communities where they hold barbecues and block parties and those kinds of things. That is the whole point of this builder, he wanted it to be a very tight community and we have so far successfully been able to do that with the people who have purchased here.”

The homes range in size from 4,010 to 5,110 square feet of living space on half-acre lots. Two of the three floor plans have multiple layout variations and all three have different exterior elevations from which to chose.

Plan One has three bedrooms, an attached casita, a 658-square-foot covered loggia, and a 335-square-foot private gated courtyard. Buyers also have the option to include a second level loft or bonus area with a deck. The kitchens are outfitted with a GE Profile stainless steel appliance package that includes a 48-inch built-in refrigerator, a cooktop with five burners, double ovens, a microwave, and a dishwasher with a quiet operation feature.

Plan 2 offers a 1,150 square-foot master suite that is situated on the opposite side of the house from the other three bedroom suites for privacy. As with Plan 1, there’s also a large covered loggia.

The largest of the homes, Plan 3 is being built with two variations — a four bedroom (4,588 square feet) and with the option to add a fifth bedroom and bonus room (for a total of 5,110 square feet).

Each house comes complete with a pool and spa in the backyard. Buyers can also customize a home to their specific needs if they buy early. For example, on some lots Petrus has added garage space for buyers who want a five-car garage.

“It is a great value for half-acre lots and 4,000 plus square feet and they’re only being 55 homes,” says Maccio. The large Great Room in Plan One has 12-foot ceilings and a formal dining option. Among the highlights in the master bathroom are a large oval soaking tub with a Piedrafina stone deck and backsplash, dual sinks, and Moen fixtures. The luxurious master bedroom is wired for sound and has crown molding and an oversized walk-in closet.