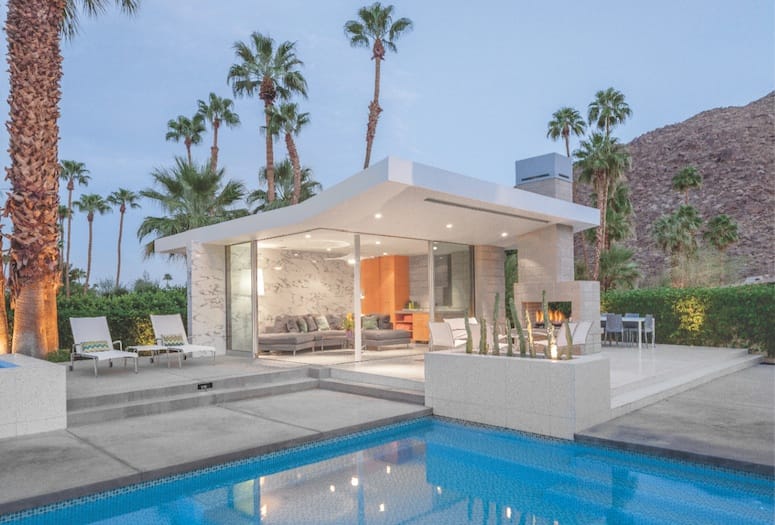 The home’s new “pool pavilion” features a modern adaptation of a midcentury butterfly roofline, which translates as playful and timeless.
House photos by Steve King

It pays to earn repeat business

When architect Anthony Stark from Corsini Stark Architects in Los Angeles was hired to rework a Palm Springs vacation home, his clients wanted him to get to know the house as intimately as they had. Owners Sam Kivett and Jon Gilbert took their friends’ sound advice after purchasing the 1958 home in Vista Las Palmas and lived there part time before committing to a redesign. Why not invite Stark to do the same? Homeowners Jon Gilbert (left) and Sam Kivett enjoy the home’s indoor, outdoor, and pool spaces as much as their dogs — a yellow Lab named Abby and black Lab named Bella — do.

So over a series of languid long weekends — some alone and some with his wife and kids in tow — Stark made the traffic-laden drive to live — simply live — inside his next project.
Maybe that’s why the home quietly pulses with an unwavering consistency and free-flowing harmony rarely seen in structures of any era. When the homeowners and their architect met to compare notes, each had taken their time, studied the home’s nuances, and truly become acquainted. Its familiar rooms spoke to them, and its personality had a chance to shine through.

For the owners, their home — prized for its vast views in a peaceful neighborhood filled with other creative types bicycling the back streets and walking their dogs — presented a solid canvas. Built by the Alexander Construction Company, it was designed by architect Charles Dubois, known for his wider, more rambling midcentury designs that some might classify as “Atomic Ranch.” The homeowners asked architect Anthony Stark to “make the entrance interesting” — a feat he artfully pulled off while keeping true to its midcentury roots. The home’s exterior echoes the ochre hue of the desert sage on the hillside beyond.

The couple’s impressive pairing of talents played into their initial flurry of ideas. “I run facilities and construction projects at a Hollywood studio, and Sam is good with color and space planning,” Gilbert says of his partner’s design background that includes being the first host of HGTV’s Design on a Dime. “I might like something a lot, but if he doesn’t, we’ll move on and find something else,” he says. “We work for consensus.”

On his own visits, Stark was taken in by the sprawling yard trimmed in fruit trees and the planes of walls that slice through the home. He enjoyed quiet days to experience how the light moves, the view changes, the breeze shifts. “The scale is really great,” he says. “But the house seemed to turn its back on the neighborhood and on the site itself.” He was strongly compelled to open up walls and add windows while allowing for privacy indoors and out. And because each had invested quality time there, both Stark and his clients were instinctively on the same page.

“There was a lot of conversation about texture and materials — as well as about not creating a strict interpretation of a midcentury home,” Stark recalls. “We wanted to modernize it. We took advantage of some of the contemporary architecture, but left a nod and a wink to the legacy of the area.”

Kivett says that living there first completely changed their perspective. “We found that we loved living in front of the house, so we created a fire pit and dining area there,” he notes. They even dropped a bocce ball court into a fairly unusable space out back. “Every outdoor space has a purpose,” he says.

Original wood beam ceilings soar above the dining room in a captivating midcentury tilt. The restained beams add warmth to the contemporary design, which includes a George Nelson Bubble Lamp.

Which was exactly Stark’s concept: to construct “layers of rooms” — some for morning, some for evening, some for lazy Saturday afternoons. Just in case someone decides to pull down the solar shade, turn on the ceiling fan, and sneak in a nap in the pool pavilion — which was never intended to be a sleeping space per se. Life happens.

The shade-giving “pool pavilion,” as the trio likes to call it (dubbed so as a respectful reference to Mies van der Rohe’s stunningly minimalist Barcelona Pavilion built ahead of its time in 1929), didn’t exist on the property before Stark came along. It was born of the dust, and it features the same sleek and polished materials as the main house. Glass panels slide back on two sides from where they meet at a poolside corner.

Angled rooflines on the home and “pool pavilion” seem to face off over the pool in an architectural duel of good looks. The open area between the two living structures includes a water feature, spa, fireplace, and barbecue center.

Maintaining its own fridge, sink, ice maker, and bathroom, the pavilion could mold to many functions. It was designed, however, as a dedicated “hangout space” that everyone can’t help falling in love with. “It’s just this special kind of essential yet extra space that takes the home over the top,” Gilbert muses.

A final consideration involved keeping the whole property accessible for their two Labrador retrievers. “Most of the design does revolve around the dogs,” Gilbert says with a laugh. “They love the pool and live in the water. We made it dog-friendly, and we tell our friends bring their dogs, too.” Kivett concurs. “They turn the pool pavilion into their big, fancy doghouse.”
Stark’s favorite facet is actually a void — the deliberately crafted space between the two structures and the pool, which connects the home to the landscape and outdoor areas. His weekends spent living on-site provided a vision for the placement of each element — even the blanhttps://palmspringslife.com/admin/pages/Publishing/index.php?issueid=2083&itm=14690&mid=1333&pagetype=article&parentitem=2083&parentview=edit_issue&view=edit_page&requiressl=truek spaces themselves. A marble-look tile accent wall anchors the pool pavilion and provides privacy for the corner outdoor shower, which features spa-style towel and robe hooks and a dramatic opening to the sky.

“Tony was charged with pulling people into the space, and he did a great job,” Kivett praises. “Every aspect is designed to pull you through, which becomes a kind of wayfinding.”

Putting their own experience, professional opinions, and good taste aside, the couple says they feel fortunate to have had Stark on the journey with them, along with their contractor and landscape designer. “They definitely added value to what we couldn’t have done otherwise,” Gilbert says. “I’ve never been a believer in trying to save money by doing it yourself. They work in the desert. They know the materials and the aesthetic. It’s money well spent.” The pair chose tile from Heath Ceramics as the vibrant focal points of each bathroom.

Luscious blocks of bright tiles were a driving force of inspiration behind Sam Kivett and Jon Gilbert’s Vista Las Palmas home. While the tiles and their midcentury aesthetic, care of Heath Ceramics, appear only in the entry hall, kitchen, and bathrooms, their saturated punch encouraged other splashy accents throughout the home. In fact, the pair’s entire color palette emerged from their tile choices.

Instantly want-able, each handcrafted ceramic tile falls under the spell of the company’s signature hand-glazing technique — a Heath staple for the past 50 years. No two of the durable, vitreous (virtually non-porous) stoneware tiles are the same.

The home’s entire color palette emerged from these handmade tiles specially ordered for the space.

Founded in 1948 by entrepreneurial ceramicist Edith Heath, the company now churns out seven tempting-as-candy collections. Joining squares and rectangles in a variety of sizes are tilting hexagons and regal diamonds, staggered patterns, and three-dimensional motifs that all but leap from the walls.

The closest showroom beckons on Beverly Boulevard in Los Angeles. But if you’re passing through San Francisco’s Northeast Mission neighborhood, stop in to tour the tile factory, where some 60 craftspeople maintain the midcentury heritage.

Most tile designs are literally made to order, so check lead times and remodel accordingly.

He Said, He Said

Making a home feel like home is as much about what you don’t want as what you do.

Jon Gilbert says: “We’ve had a Spanish-style home in L.A., so we’ve been there, done that. I think that was music to Sam’s ears, because he was more into the modern aesthetic. I’ve come around. I want simplicity in my life. I don’t want any more antiques or tchotchkes!”

Sam Kivett says: “For the overall feel, we wanted a serene, cohesive space. We wanted everyone to feel free to put their feet up. Nothing too precious; comfort was the key word. We wanted it straightforward and casual, so it all felt like one space.”