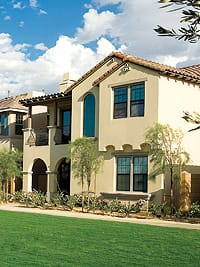 You’ve heard it and read it for months, going on a year: The real estate market has tanked. Enter at your own risk. But we live in the magical desert, where — despite appreciable concessions some sellers offer to get a leg up on the community down the road — median prices of existing Coachella Valley homes rose about 4 percent in the fourth quarter of 2007 vs. the same quarter in 2006 (although sales dropped 21.4 percent in all of 2007 compared to 2006), according to the most current statistics from the California Desert Association of Realtors.

Concessions — which may include interior upgrades, no closing costs, no homeowner association dues for a year or more, club memberships, and other temptations (such as Century Vintage Homes’ January offer of a 2008 BMW, Ford F-150, or a Harley-Davidson) — appeal especially to would-be buyers who were priced out of the market before the subprime mortgage crisis crippled confidence in the past year.

“The true bright side is the buying opportunities available here for people who thought the market had passed them by,” says Michael Corbett, part-time Palm Springs resident and author of Find it, Fix it, Flip it! and Ready, Set, Sold! (Corbett also lectures with Donald Trump on wealth creation through real estate ownership.) “People who thought the Coachella Valley market was unaffordable can now buy in.” The message: Buy now for the long term.

“I think things are starting to turn,” says Ron Gerlich, regional vice president of Coldwell Banker. “For each month of 2008, we are seeing consistent increases in newly opened escrows.” March sales, Gerlich reports, hit a little over 300, up from 150 in January.

Scott Lyle of Lyle Realtors in Palm Springs says, “Low interests rates combined with lower prices and great availability have created the perfect storm for buyers.” With more than 30 years’ experience selling property here, Lyle has seen all of the economic cycles. “This is the third buyers’ market I have worked since I started selling real estate in the desert.”

Eric Neiderman and his family, who relocated to Rancho Mirage in November, needed only a week to find their perfect house at the right price. “We looked at two dozen places and bought a 3,000-square-foot house built in the late ’80s that had been totally remodeled by the sellers three years ago,” Neiderman says. “The house was originally priced when sellers ruled.” By the end of last year, however, the seller wanted to deal.

In 2007, the California Desert Association of Realtors reports, 6,736 existing Coachella Valley houses sold, down from 8,863 in 2006. Prices remain soft because of the large number of houses for sale. There were 9,186 homes, including some foreclosures, in inventory by the end of 2007 — some 950 more than in 2006. However, compared to statewide numbers where the median price fell 16.5 percent and sales decreased 33.4 percent, our market shows more resiliency.

The news has been tough for sellers. However, buyers are looking for well-located houses. Price your property right, make it “model-home” ready, and it will sell. Lyle recently sold a house close to listing price in Chino Canyon in 60 days. Originally listed at $1,489,000, it sold for $1,480,000. “That’s a perfect example of a house that was priced right from the start and beautifully done,” Lyle says.

Phil Kaplan recently listed his beautifully remodeled Vista Las Palmas Alexander for $1,278,888. “I want my price and don’t care about the market. It’s a great house and I’m under no pressure to sell,” says Kaplan, who signed only a 90-day listing agreement. “I told my agent if we don’t get a respectable offer, we will revisit it in the fall.”

Seeking a lifestyle change, Kaplan will buy in Rancho Mirage or Palm Desert when he finds the right house. He has looked at about a dozen houses. Like many buyers, he thinks prices will fall and figures his patience will pay off.

So does Alan Sklar, a San Diego investor and developer. Over the past eight years, Sklar has “flipped” 11 properties. Now he’s sitting back. He bought a house in Palm Desert two years ago. While preparing to flip it, the market tumbled and Sklar decided to rent it until the market rebounds and its value exceeds what he paid for it.

“We’ll know what the bottom of the market was six months after it happens and we see it as a dot on a graph,” says Greg Berkemer, executive director of the California Desert Association of Realtors. “As always, timing the market is pure guesswork.”

To negotiate well in this environment, you must work with a seasoned pro. “It’s still difficult putting buyer and seller together at a price where both feel it’s a win-win. You need a strong and experienced negotiator on both sides to keep the deal alive and the paper moving,” says Coldwell Banker’s Beverly Bell, one of the desert’s top producers for years. Thanks to interest-rate cuts, she stays busy showing houses every week.

Michael Swain of Irvine recently sold his 2,700-square-foot Palm Springs house after buying a larger one at Alta in Palm Springs. “It sat on the market for a while; then as we needed to sell, we dropped the price. We still sold it for more than we paid. If we had to do it again, we’d try and lease it out.”

Leasing versus selling is worth visiting to see if it pencils out.

Leonardo Montenegro of Prudential California Realty in Rancho Mirage, often tells sellers to drop prices. One Palm Springs listing sat for six months. “I said that we needed to drop the price to be more realistic with the market and the comps,” he says. The seller reduced it from the mid-$400,000s to $399,999. An offer came in the next day, and it sold for $390,000. “Listen to your Realtor. We are the ones with buyers every day, and we know the inventory,” Montenegro says. “If your Realtor has done everything in his or her capacity to sell the house and it hasn’t sold, chances are it’s overpriced. If you need to make a price reduction, do it as soon as your Realtor advises you. Otherwise, you will be constantly missing the correct bracket.

Tangerine Palm Springs, a community of 12 freestanding contemporary homes, recently dropped its prices. Now the lowest-priced model starts at $979,000, compared to the original $1,240,000.

Home builders with staying power are used to boom-or-bust cycles. To gain interest, communities differentiate themselves. Trilogy at La Quinta by Shea Homes focuses on the green aspect of its homes and the long-term added value to the homeowner’s lifestyle and environment.

Peter Solomon of Regency Homes, one of the area’s leading builders, is marketing Espana in Indio and has little concern. ”We’re selling value right now,” he says. “We’re seeing buyers because everything is aligned for them with good interest rates and a good selection of homes.”

Lawrence Rael, developer of Port Lawrence in Palm Springs — a mixed-use, resort-style project of retail and work/live lofts yet to be built — claims the current market doesn’t worry him, either. “I’m excited yet humbly confident and satisfied with the response we’ve had so far,” he says.

The Coachella Valley is a special place with distinct appeal. Across the country, values may fall, while desert living grows more desirable. Historically, real estate has always appreciated. Buy now and in five years you’ll be glad you did.