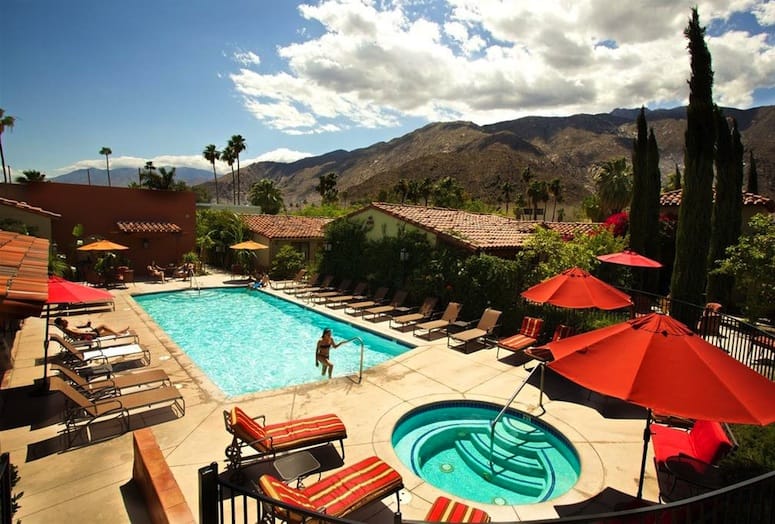 VIDEO: Take a tour and hear from owners Felipe and Lisbet Castaneda.

There is no mistaking the view from the Los Arboles Hotel in Palm Springs.

That’s because it’s not from the hotel’s grounds, but from its roof.

Hotel guests have access to gorgeous views of Mt. San Jacinto and the entire valley. The Palm Springs tram can even be seen traveling up and down with its light on at twilight. There is plenty of seating and tables to bring a drink, sit back and watch the sunset or study the stars. Reached by a stairwell, the terrace roof is a place to take in the view, sip some wine, and relax.

Located in the Movie Colony, this charming 21 room hotel was built in the 1930s and originally named Los Arboles Hotel. In the 1950s, it became Indian Manor, which was run as a hotel, then later as apartments. Present owners Felipe and Lisbet Castaneda renovated the hotel and reopened it under its original name in 2011.

“The hotel is a mix of Mexican, Californian and Spanish design and décor, evoking some of the essence of rustic, romantic California mission style,” says owner and designer Felipe Castaneda. The Fireplace Room includes a Jacuzzi tub and fireplace.

Each room is unique and fresh with colorful artwork, accent walls, archways and Mexican Talavera tile. The Fireplace Room boasts a Jacuzzi tub and fireplace. The Los Arboles Suite provides a lounging area with a bar and mini fridge, along with a tiled Jacuzzi tub and stand in rain shower. All rooms have at last one hammock to take advantage of siesta time. Luminaria guide your way along the hotel's night pathways.

The hotel also has lovely banquet facilities that seat up to 30 guests. Los Arboles Hotel has hosted many weddings and other events. Lisbet Castaneda, guest relations maven, remarked that “the hotel has so many returning guests, who want specific rooms, services, and attention during their events. We love giving it. When you're with us, you're part of the Los Arboles' family.”

• Book a room during the Perseids Meteor shower or others throughout the year, and stargaze from the rooftop terrace.

• Take a hammock siesta, then head to the pool for chips and salsa, a tostada, and a margarita prepared by El Mirasol.

• Book the Fireplace Room, take a jacuzzi and enjoy a glass of wine near the fireplace. A massage therapist is available on call. Towel off and drop directly into bed a few feet away.

What other hotels have we profiled: Hotel Essentials