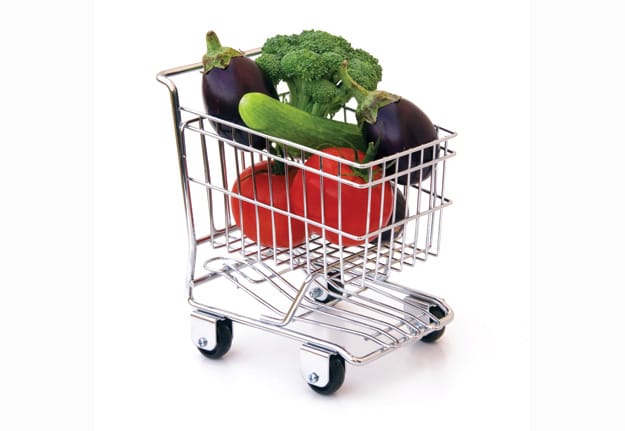 Raised on pot roast, fried chicken, pork chops, meatloaf, and the occasional T-bone on the grill, you frown when you read reports on the benefits of embracing a meatless diet. Although you’ve heard about the longevity of people in cultures that don’t consume the typical American diet, you’re not sure such a diet fits your own lifestyle. Won’t you miss bacon? What about those occasions when you only have time to hit the drive-through for a double Mac?

Before you dismiss the idea of coloring your world with green, yellow, orange, red, purple, and white veggies, consider this: The American Dietetic Association numbers among the benefits of a vegetarian diet reduced risks of heart disease, hypertension, diabetes, obesity, cancer, renal disease, dementia, diverticulitis, and gallstones.

“Vegetarian diets tend to be lower in saturated fat and cholesterol and have higher levels of dietary fiber, magnesium and potassium, vitamins C and E, folate, carotenoids, flavonoids and other phyto-chemicals,” says the position paper published in the July 2009 Journal of the American Dietetic Association.

“Two out of three people in the country are overweight. Going to a more plant-based diet can help them lose body weight,” says Dawn Jackson Blatner, a spokesperson for the association, registered and licensed dietician, nutrition consultant to the Chicago Cubs, cooking school instructor, and author of The Flexitarian Diet (McGraw-Hill 2009). “It’s really a magical type of approach: disease prevention and weight control.”

From infants to seniors, pregnant women to athletes, “a well-balanced vegetarian diet could be and should be for everyone,” Blatner says. “The key word is ‘well-balanced.’ If not done correctly, you are at risk of not getting enough protein, iron, and zinc.”

Blatner has been eating a plant-based diet for 15 years in an “ebb-and-flow” manner: from vegan to vegetarian to flexitarian, a term coined to describe those who occasionally eat meat.

“Flexitarian is that liaison between the typical American diet and a vegetarian one,” Blatner explains.

Adopting a healthier diet requires more than simply eliminating meat and poultry (“only a notch better than red meat in terms of saturated fat,” Blatner says) — or at least minimizing the amount of meat and poultry consumed.

“Definitely, people can do this wrong,” Blatner says. She notes four traps people fall into when making the transition:

1. Eating their usual diet minus the meat;
2. Becoming a “cheese-aholic” (i.e., eating a lot of macaroni and cheese, which is high in calories and saturated fat);
3. Focusing on vegetarian burgers, ribs, and hot dogs (a “faux-meat fixation”), which means consuming too much sodium and processed foods;
4. Giving nonmeat foods a “health halo” and then consuming too much (i.e., eating half a jar of almond butter without thinking about the 1,000 calories it contains).

“How is that possible? But they do it. They have bread for breakfast, rice for lunch, and pasta for dinner.”

T. Colin Campbell, professor emeritus of nutritional biochemistry at Cornell University, agrees.
“Ninety percent of vegetarians still are not eating a very good diet,” he says. “Even vegans have problems. The real story has to do with whole plant-based foods.” As he explains it, a lot of plant-based convenience foods are still highly processed (i.e., white flour). To gain the antioxidant benefits of grains and vegetables, we need to eat them as “whole” foods. “That’s where the magic bullets are,” Campbell says.

Suggest a nonmeat-based diet to a typical Midwesterner and you’ll likely hear their first objection to be that vegetarian diets don’t supply enough protein (and they’re not going to eat tofu). To the contrary, there are multiple protein sources, including quinoa, whole-grain bread, brown rice, barley, beans, nuts, seeds, and soy milk. Campbell, who grew up on a dairy farm, believes we’re not only misled in our devotion to protein, but in fact are compromising our health — particularly when we consume animal-based proteins.
Campbell’s book, The China Study (BenBella Books, 2004) makes public revelations from more than 20 years of research he conducted in partnership with Cornell University, Oxford University, and the Chinese Academy of Preventive Medicine.

“What we found was shocking,” Campbell writes. “Low-protein diets inhibited the initiation of cancer by aflatoxin, regardless of how much of this carcinogen was administered to these animals. After cancer initiation was completed, low-protein diets also dramatically blocked subsequent cancer growth. … In fact, dietary protein proved to be so powerful in its effect that we could turn on and turn off cancer growth simply by changing the level consumed.” The research further showed that casein, which makes up 87 percent of cow’s milk protein, promoted all stages of cancer, while plant proteins, including wheat and soy, were safe.
“Every kind of protein has a profile,” Campbell says. “The composition of animal proteins is rather similar to what we have in our bodies as humans. … [so] these proteins get used more efficiently. Plant proteins are oftentimes limiting in one or two, maybe three kinds of amino acids. That slows down the growth rate.

“The so-called ‘high-quality,’ animal-based proteins also grow cancer tissue more efficiently,” he adds, “and that’s not something that we want.”

While Campbell agrees that protein is an essential component of any diet, he believes the optimum level is 10 percent of total calories consumed, whereas the average American consumes 17 to 18 percent and about 70 to 75 percent of that is from animal sources. “That’s the mean,” he stresses. “Half the people are consuming more than that.”

He further notes that the average age of professional football linemen (who typically rely on high protein consumption to build muscle mass) is 56. He estimates that 90 percent of all heart disease, cancer, and diabetes could be prevented by a lifetime plant-based diet.

Campbell doesn’t focus on counting proteins, however. “If people will simply consume a variety of whole-plant foods, they don’t need to worry about it,” he says.

Things to Think About

According to Blatner, people who adopt a plant-based diet specifically need to consider four “pockets” of nutrients:

Protein, iron, and zinc. “Don’t just take meat out of your diet,” Blatner advises. “Swap meat for beans and lentils.”

Calcium and vitamin D. Those who avoid dairy products can derive these nutrients from plant milks (i.e., fortified almond, rice, or soy milk).

Omega 3 fatty acids. Those who do not eat fish can get omega 3s from plant sources such as flax seeds, walnuts, and what Blatner calls “the newest kid on the block”: chia seeds.

Campbell cuts to the chase: “As we increase our consumption of animal-based foods, cancer develops, heart diseases, diabetes, autoimmune diseases, even common problems such as colds and flu and acne and arthritic conditions.”

Registered and licensed dietician Dawn Jackson Blatner offers the following guidelines for those who want to become vegetarians but aren’t ready to commit wholeheartedly.

Reportion your plate. Eat what you are eating now, but shift the focus. For example, if your dinner consists of steak, potatoes, and green beans, decrease the amount of steak and potatoes and eat more green beans.

Reinvent old favorites. Continue making the dishes you like most, but substitute a nonmeat ingredient or at least cut back on a meat ingredient and add beans. Swap each ounce of meat with 1/4 cup beans. Blatner suggests trying black beans in a taco or white beans with pasta.

Refresh your recipe repertoire. Try making vegetarian dishes. Ask a vegetarian friend for a recipe or two. Go to a restaurant and get inspired by a dish on their menu. Pick up a Vegetarian Times magazine or a new cookbook that focuses on plant-based dishes. Preheat broiler. Mist eggplant slices with oil spray and broil about 15 minutes until golden, turning once.

In food processor, purée sauce ingredients until smooth. Mash filling ingredients with fork until the texture resembles ricotta. Place 2 T. of filling on the end of each eggplant slice. Roll each slice and place them in a baking dish misted with oil spray.

Top with sauce and Parmesan. Broil until cheese is golden and rolls are heated through. Makes 4 servings.

*Giardiniera (pickled vegetables) can be found in the Italian section of gourmet grocery stores such as Jensen’s Finest Foods. If you cannot find it, you can substitute pickled
jalapeño peppers. Preheat oven to 350 degrees. In skillet, sauté oil, onion, garlic, spinach, and chopped mushroom stems for 10 minutes, until spinach is thawed and mushrooms are tender.

Bake 15-20 minutes, until cheese
is bubbling and mushrooms are
al dente.

Meanwhile, boil pasta according to package directions, drain and simmer with remaining marinara. Divide pasta among four plates, each with one mushroom. Makes 4 servings. Grill zucchini planks about 3 minutes on each side until just tender.

Mix together cheese, herbs, and tomatoes.

Spread 2 to 3 teaspoons of mixture on each plank and roll. Sprinkle rolls with salt, pepper, and additional herbs.

Optional: Use a single chive to tie each roll into a bundle. Makes 12 servings. Grill corn and cut kernels off the cob.

Toss all ingredients and serve at room temperature. Makes 8 servings (1 cup each).