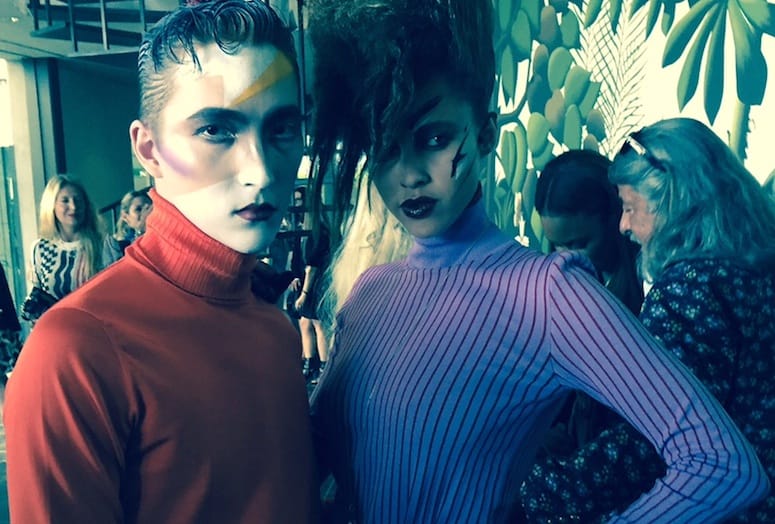 As Fashion Week El Paseo drew to a close in late March, a quiet buzz began about a world-renowned designer showcasing their Resort 2016 collection to Palm Springs.

When it was finally unwrapped that Louis Vuitton (LV) would bring their designer, Nicolas Ghesquière, along with his newest collection, 58 outstanding models from around the world, 200 VIPS and celebrities, international and national fashion press, and a staff of 400 to Palm Springs, a media frenzy began in the desert and throughout the fashion world that felt somewhat like a fashion sunami.

When the event became a reality on May 6, it lived up to expectations from many perspectives.

Hand-addressed invitations for each event were personally delivered to the local guests in LV leather envelopes along with a few other Louis Vuitton goodies (these will surely be used again and again by this invitee).

Guests were asked to meet at the Parker Palm Springs at a specific time to be transported in elegant black SUVS to the Bob Hope Estate ,which was disclosed as the site of the show. Louis Vuitton models peer down from the outside balcony of the Bob Hope Estate.

The stunning arrival to this fascinating home was appropriately met with crystal goblets of LVMH Ruinart champagne (no flutes for these Frenchmen). The handsome and charming waiters in crisp white jackets did not fool us. They were  models brought in to create another wow factor for the grand entrance.

While lifting your champagne glass, your eyes were immediately drawn to the upper balcony of this architectural wonder. Boldly face-painted mannequins appeared to be staring down at you… as if you were invading their territory. Selena Gomez was among the celebs drawn to Palm Springs.

The mannequins turned out to be live models in severe Louis Vuitton futuristic unisex fashions. They were seen later walking about the home as guests spent a delightful hour mingling, imbibing and, of course, celebrity watching.

Futuristic plexiglass and wooden crates to be used for seating close to 400 guests were set in an undulating serpentine style around the outside pool (there is also an indoor pool), and circled the entire outside area. The indoor pool at the Bob Hope Estate.

Soaring towers of glass and mirrors held the video and sound equipment as a drone circled about to complete this futuristic fashion fantasy. Futuristic plexiglass and wooden crates were used for seating close to 400 guests.

Once the show began with the sound of the gong rung at the new Louis Vuitton Foundation in Paris, the architecture and the fashion melted into one perfectly choreographed fantasy. Models walked behind the glass of the upstairs balcony, down a circular staircase and directly in front of the audience in a uniformly brisk pace. Fashion ranged from folkloric to edgy to “Back to the Future."

Fashion ranged from folkloric to edgy to “Back to the Future” with an array of looks that reminded me of the 1970s, including true hot pants in bright-colored prints mixed with striped silk blouses or heavy sweaters. Lace and leather were seen in maxi skirts and dresses, but exceptional cutting made the long leather prairie dresses look new and futuristic. The suppleness of the dresses was a true sign of a couturier who knows how to cut his fabric.

There was an array of leather jackets in boxy short or fitted silhouettes to complement the resort separates. An elegant color blocked sequin longer jacket would  be a versatile piece for one’s desert wardrobe. This collection certainly suited the environment and fulfilled a vision of Louis Vuitton designer Nicolas Ghesquière.

This collection certainly suited the environment and fulfilled a vision of Louis Vuitton designer Ghesquière, who apparently fell in love with the architecture of the Bob Hope Estate when he last visited the desert 15 years ago and was inspired to bring the “volcano house” back to life with his Resort 2016 collection. The audience included Kanye West, Michelle Williams, Catherine Deneuve, fashion editors, a few local invitees, as well as other Louis Vuitton clad luminaries from all over the world.