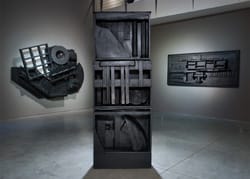 A survey of intricate, black-painted wood assemblage sculptures by Louise Nevelson — one of the most important sculptors of the 20th century — opened relatively quietly at Buschlen Mowatt Galleries.

Nevelson — born in Kiev, Russia, and raised in Rockland, Maine — studied briefly with Hans Hofmann until the Nazis ran him out of Munich and worked on murals with Diego Rivera before turning fully to sculpture.

She opened her first solo exhibition in 1941 at the Nierendorf Gallery in New York and gained international notoriety for stockpiling wood objects and fragments and assembling them with a measure of spontaneity into unusual and innovative configurations in small and monumental scale. She made her first shadow-box reliefs and her first wall in 1957 and was included in the Venice Biennale in 1962.

Her first major museum retrospective came in 1967 at the Whitney Museum of American Art in New York. Then came the commissions — massive steel constructions that appeared like monoliths everywhere from Princeton University to downtown Los Angeles. Every sculpture, regardless of its scale, traps you in something of a maze — an intricate world she created with so many individual parts, each painted black to fulfill its new function: to serve the whole.

The sculptures at Buschlen Mowatt Galleries are among the finest examples of Nevelson’s work, which is red-hot on the secondary market (the artist died in 1988). Auction results in February punctuated the demand for her sculptures. For example, Dawn’s Landscape V — a 26x26x2-inch wood piece — was estimated by Sotheby’s New York to sell between $35,000 and $45,000. It went for $102,000. Works akin to those at Buschlen Mowatt fetched into the six figures, well above their estimates.

Prices aside, these are stunning and important sculptures worth seeing. That’s the beauty of galleries: Admission is free.

This article was originally published November, 2006 and updated for the web June, 2007.