Palm Desert Participates in National "Love Across the USA" Project 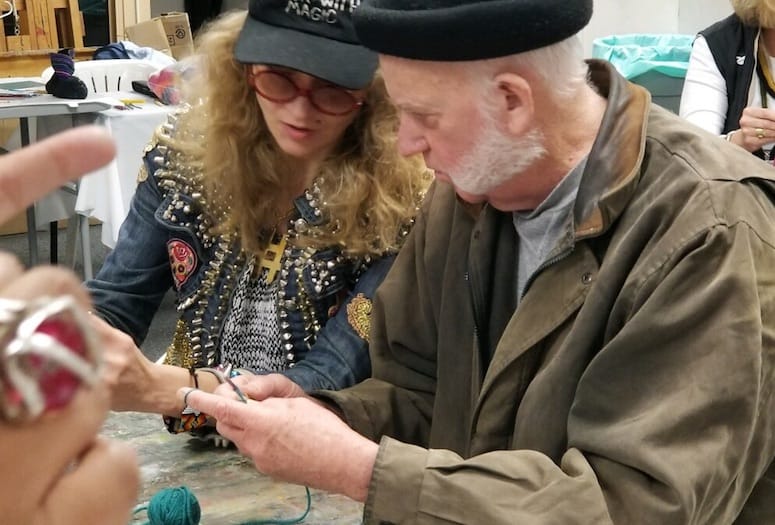 (Left) Artist Agata Oleksiak, known professionally as Olek, works with a crochet enthusiast during a Love Across the USA project gathering in the valley.
PHOTOGRAPHS COURTESY DEBRA MUMM

Community organizing and crochet might seem an odd pairing at first, but there are similarities. Both involve small actions multiplied over time into complex systems. Both aim to improve quality of life. And both are satisfying when performed in a group.

The artist Agata Oleksiak (known professionally as Olek) gained widespread attention in 2003 when she began using crochet as social critique. High-profile pieces included wrapping Wall Street’s Charging Bull statue in pink, purple, and turquoise camouflage, and making colorful bodysuits for subway riders. Don’t call it “yarn bombing,” though. That trend, which exploded in the mid-2000s, took a whimsical approach to reclaiming space. Olek’s work appears cheerfully loopy on the surface yet has a sharper edge, often uniting women to call attention to an issue.

CREATE Center for the Arts and the City of Palm Desert are giving local residents an opportunity to participate in a collaborative work developed by Olek. Love Across the USA, a Parallel Project of Desert X, the site-specific biennial art exhibition that runs through April 21. builds large-scale portraits of historic activists such as Susan B. Anthony, Sojourner Truth, and Harriet Tubman. On the Love Across the USA website, the artist says the idea originated after the 2016 presidential election when she saw a photo of Anthony’s gravestone covered in “I Voted” stickers.

“Despite the loss that day, the image stuck in my brain and my heart. Amid all the negativity that followed, it inspired me to create a project that would celebrate the accomplishments of women, many of whom had been forgotten throughout U.S. history,” Olek states on the website.

Palm Desert is the only California location in the project at this time. Other murals have been completed or are underway in Ohio, Virginia, North Carolina, Colorado, Pennsylvania, and New York, where the artist lives. The goal is to have one in every state.

Love Across the USA: California kicked off with a Feb. 23 workshop led by Olek and author/designer Rohn Strong. More workshops are scheduled for March 20 and 26. There’s no cost to attend, and instruction and yarn are provided. Each participant commits to making a minimum of two square feet but can assemble as many sections as time allows. Finished sections are due March 26. 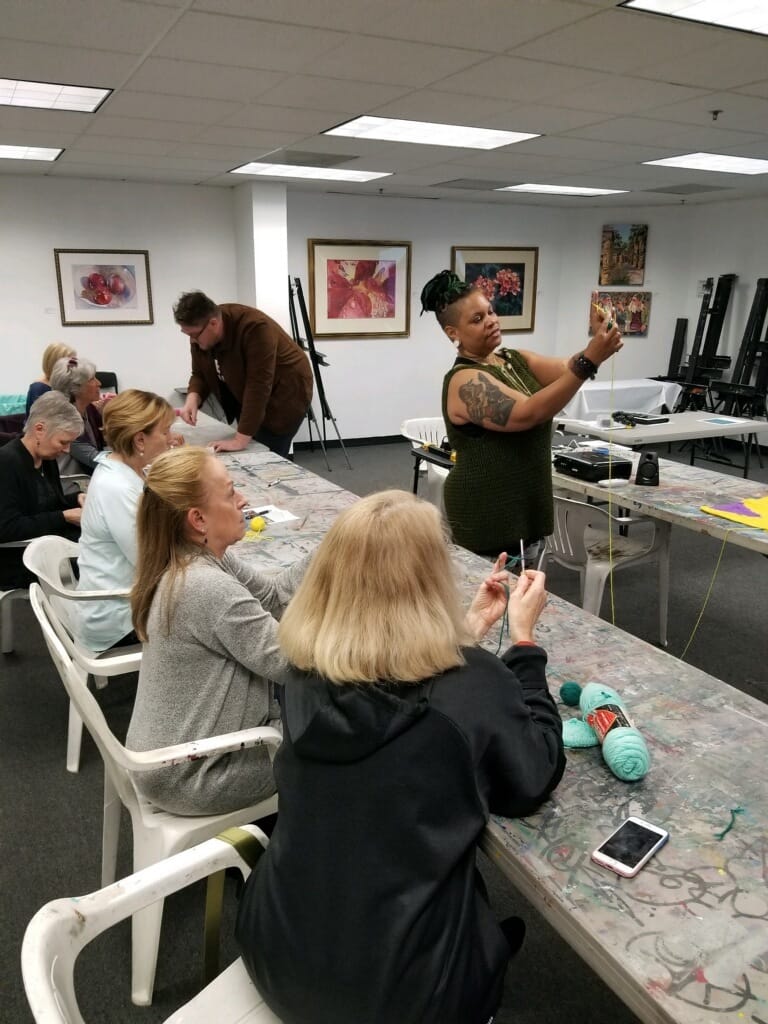 The subject of CREATE’s portrait will be revealed on April 6 when the mural is unveiled and hung on the Palm Desert Civic Center, stretching almost 30 feet long and more than 12 feet high. For many viewers, it may be the first time they learn about a woman who had a profound impact on the desert environment and whose contributions have gone largely unrecognized.

For others, it may be the first time they tied a slip knot. Palm Springs resident Joan Black saw a flyer and decided to join in, even though she had never crocheted. She liked the idea of meeting other people who valued the art form.

In addition to workshops, CREATE Founder and Executive Director Debra Mumm plans pop-up crochet circles in local restaurants and coffee shops. The first, “Crochet Olé,” will be March 16, 4–6 p.m. at Casuelas Café in Palm Desert. Mumm says the act of public artmaking can be a natural conversation-starter.

“People inherently recognize the value that art can bring to helping people have more complete and fulfilling lives,” Mumm says. “The main thing is having the tools and equipment, and then making them accessible to everybody.” 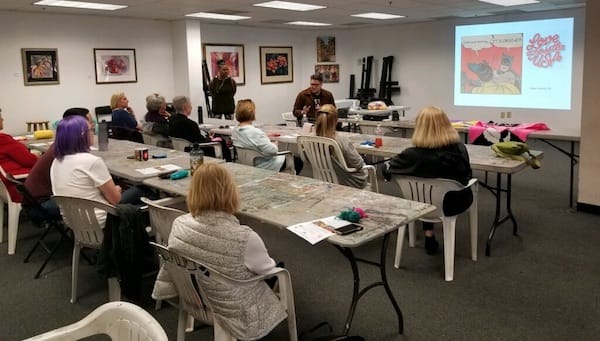 The nonprofit CREATE rents space in an office building on Fred Waring Drive. Mumm’s goal is to find a permanent home so she can expand the range of programs. For example, a donor contributed an entire woodworking studio, but without proper ventilation, it can’t be used.

Last year Mumm traveled across the country to observe and learn from different art centers, seeing 27 facilities in 15 states. “There are rural counties in North Carolina with 39,000 people that have better art resources than we do in the central valley,” she says.

Right now, however, her focus is on recruiting more contributors to the mural. “Many of the people that are participating don't really know how to crochet,” Mumm says. “I think that they're just drawn to the overall project and being part of a community. The skill-sharing is a nice aspect of it, but it's really about gathering together, being with each other, and creating something exciting.”

To register for Love Across the USA: California events, go to createcenterforthearts.org.