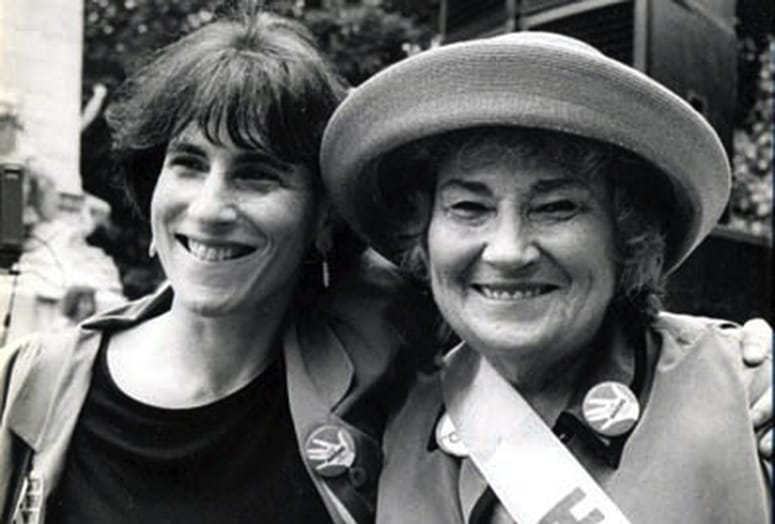 You know that “break-the ice” dinner party game where you are asked, “If I could have a conversation with anyone in history…who would it be?”

It’s a thought provoking challenge that can lead to insightful discussion.

That’s what Dee Jae Cox is hoping for in her initiative to advocate, educate, and engage women in addressing contemporary issues such as pay equality, gender discrimination, and women’s health rights.

“Women’s voices and perspective are so minimal in our culture today and we tend to get complacent,” Cox says. “Even after almost 100 years of being entitled to vote, we are underrepresented in almost every aspect of our society…as CEO’s, in Congress, theater arts…you name it. That just bothers me. We have to get more women engaged.” Lucie Arnaz will participate in a pair of panels, including one where she portrays Margaret Sanger.

Motivated by her revelation that 2015 marks the 95th Anniversary of the 19th Amendment to the U.S. Constitution recognizing Women’s Right to Vote as a direct result of the women’s suffrage movement, Cox has assembled a diverse group of leaders to come together for a one-day symposium, “Women Making History…A Work in Progress.”

Presented by California Woman 411, a project of The LA Women’s Theatre Project, Cox and cofounder Michele Weiss have put together a celebration of women’s past and present accomplishments Oct. 17 at the Hyatt Palm Springs.

The lineup includes high-powered film stars, feminist interviews, as well as high-profile artists, and professionals sharing their thoughts on the advancement of women’s causes including: • Speaker presentations by Liz Abzug, (daughter of famed congresswoman Bella Abzug) and her work with founding of the Bella Abzug Leadership Institute.

• Actress and activist, Lucie Arnaz, daughter of screen legend Lucille Ball, who along with Liz Abzug, will speak on a panel, “Our Mother’s Daughter’s,” about the paths their mother’s paved for women and how they have continued the legacy. Moderated by local radio/TV host Angela Romeo.

• Nationally acclaimed attorney, Roberta Kaplan, who successfully argued before the Supreme Court in United States v. Windsor, which resulted in a groundbreaking decision that invalidated a crucial section of the 1996 Defense of Marriage Act (DOMA). She is currently promoting her new book, Then Comes Marriage – United States v. Windsor and the Defeat of DOMA  – (This segment is in collaboration with the LGBT Center of the Desert and Outlook Magazine.) • Local author Carlynne McDonnell will be available for her book signing, The Every Woman's Guide To Equality. She is the founder and CEO of Change in Our Lifetime, Inc.

• Screening of the documentary, She’s Beautiful When She’s Angry, a look into the second wave of the women’s movement in the 1960s and 70s.

Cox, a respected playwright, producer and co-founder and producing artistic director of The Los Angeles Women’s Theatre Project, has also created a theatrical unscripted panel, “Conversations with…,” featuring historic women portrayed by actors, including Arnaz, who will perform the role of Margaret Sanger. The panel will respond to current topics and questions regarding women’s issues as the cornerstone of the conference (moderated by Sarah Jones, publisher/managing editor of PoliticusUSA).

“I cast these roles and said to these women (actors), ‘Research these women, and get into their heads,’ ” Cox says. “Think about how they might respond to issues concerning women today. For example, how might Margaret Sanger react to what is going on with regards to the present state of birth control?’”

“My goal is twofold,” she says. “To inform more men and women about the history of the pursuit of gender equity, which sometimes seems to be a radical notion, and about the women who work for change. I also want to create an awareness that there is a tremendous need to be involved in the development of policies that affect our choices. And at a bare minimum…express the need for women to vote.”