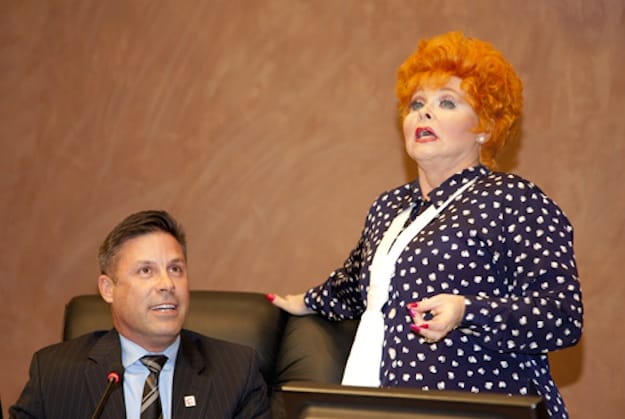 Lucille Ball made an unexpected return to Rancho Mirage recently.

Even playing the late comedic star, Suzanne LaRusch reinforced Ball’s importance as the city celebrates its 40 anniversary in 2013.

The city’s 40th anniversary schedule is already jam-packed with a variety of free events, ranging from outdoor movie screenings, concerts, breaking ground on a new amphitheater and dog park to the 13th annual Art Affaire and the 40th annual Charity Golf Tournament.

The outdoor movie screenings in May and June will feature films from Ball, Frank Sinatra, The Marx Brothers, Bing Crosby, Bob Hope and Dean Martin, who worked and lived in Rancho Mirage.

A pair of competitions will target Rancho Mirage businesses, including a citywide cocktail challenge for Rancho Mirage bartenders to come up with the city’s 40th anniversary commemorative cocktail. Resident voting starts March1 and a celebrity-judging panel will pick a winner at a special event on April 13 at The River. The second in September is a Citywide Dessert Competition.

For the complete schedule of events, visit the Rancho Mirage 40th anniversary website.