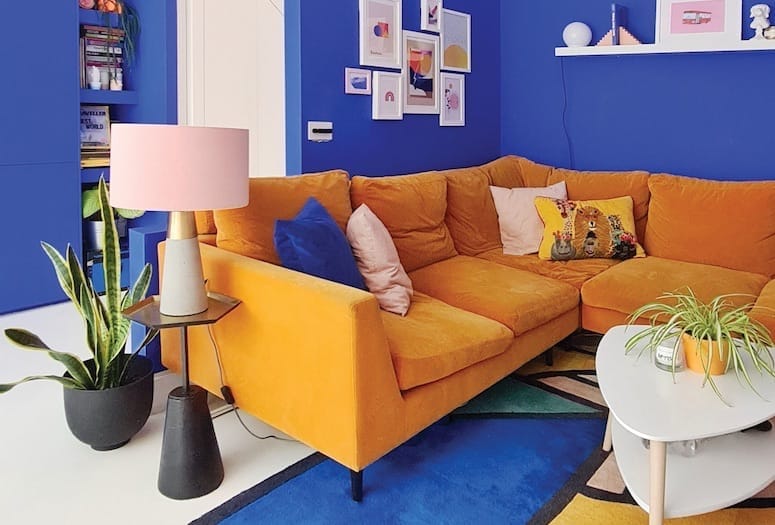 Did this photo shoot location and music studio achieve its intention to “bring a little Palm Springs to South London,”  yay or nay?

British homeowners Nikki Griffiths, a communications consultant, and her partner Luke Moseley, a songwriter and music producer, renovated their 1960s three-bedroom home with the goal of renting it out as a bright and modern destination for creative projects and branding.

The outgoing couple thrives when surrounded by artists, musicians, photographers, models, and actors. “We didn’t want to compromise on certain elements of the design,” Griffiths says, “and that comes with a hefty price tag.” They put the house to work to offset its renovation costs. 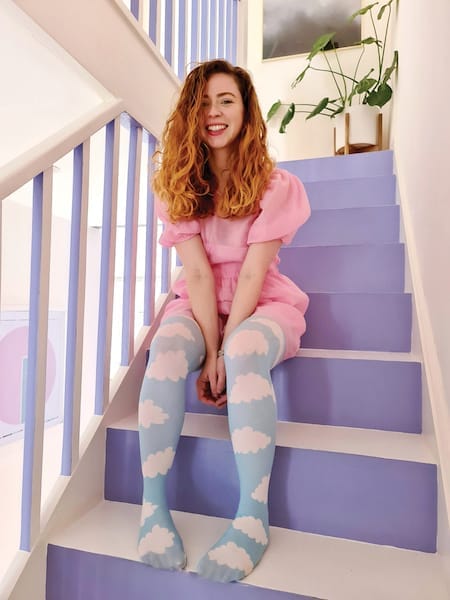 Nikki Griffiths: “It appears that Palm Springs has quite a big cult following over here.”

Though they have yet to visit the desert — “It’s very high on our bucket list” — they felt led in this direction. “The house is in the classic midcentury modernist style that exists here in the U.K. Which, aside from the cheap and robust materials, means lots of straight lines, angles, and geometry,” Griffiths says. “We were super keen to breathe new life into the house, but we also wanted to stay true to its era. I started researching modernist architecture and fell head over heels in love with the iconic Palm Springs design and the work of architects like William Krisel and Richard Neutra. Since the two styles are actually very sympathetic to each other, and of a similar era, it just seemed to make sense.”

Based on the media, pop culture, and their own research, the couple’s perception of the Palm Springs area is “very sociable and fun,” Griffiths adds. “The architecture also plays to that: pools, large living spaces, built-in furniture. It seems to promote community and friendship, and we absolutely love that.”

Rental claims to fame include an upcoming short film and a music video for the urban-pop song “Afraid” by James Hype and Harlee that “was pretty big over here,” Griffiths says. Puma also shot a women’s footwear campaign on site.

Next, the couple plans to finesse the garden “to level up the Palm Springs vibe.” Agave and prickly pear cacti will settle in with large ornamental boulders and a colorful abstract mural painted by Griffiths. “We get a lot of people stopping us outside the house or contacting us on Instagram, saying they love how we’ve brought color to the street,” Griffiths says. “It appears that Palm Springs has quite a big cult following over here.” 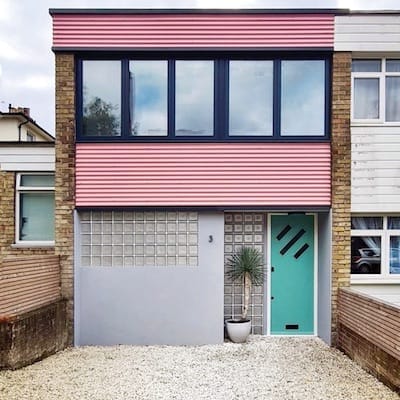 The shape of things

“Our front door  has a certain Palm Springs midcentury magic to it,” says Nikki Griffiths, who dreams of taking a local door tour. From the door’s windows to the guitar pick coffee table on the stained glass-style rug, Griffiths pairs shapes of all sorts with bold color. “There are lots of geometric elements, such as the glass blocks we added, which I think would be right at home in Palm Springs.” 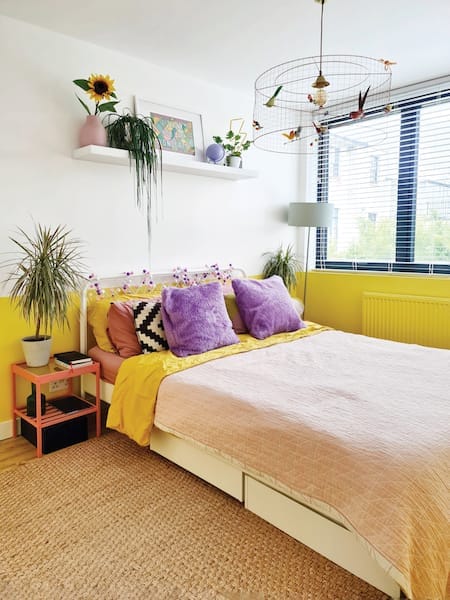 In a bedroom accented by canary yellow paint, the La Volière Pendant Lamp designed in France to birdcage perfection by Mathieu Challières hangs high. “I think our use of color is really synonymous with Palm Springs; some of the palettes would be very at home there,” Griffiths says. “We also kept large expanses of the house light and bright, which gives it that crisp aesthetic.” 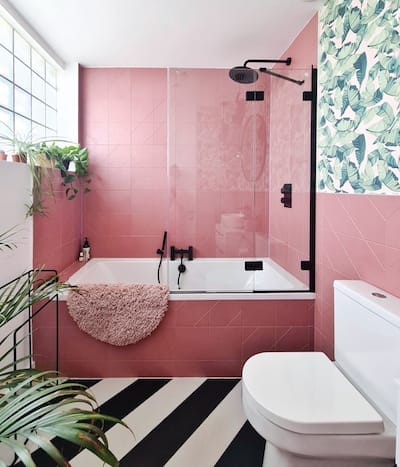 The exterior scheme makes an encore in the ground-floor bathroom, set behind the glass blocks seen from the façade. Griffiths channeled a Sands Hotel & Spa vibe for her favorite room that includes extensive tile work, leafy wallpaper, and matte black fixtures. For the upstairs bathroom, the couple imported Italian terrazzo, which continues out of  frame to encompass  the shower. 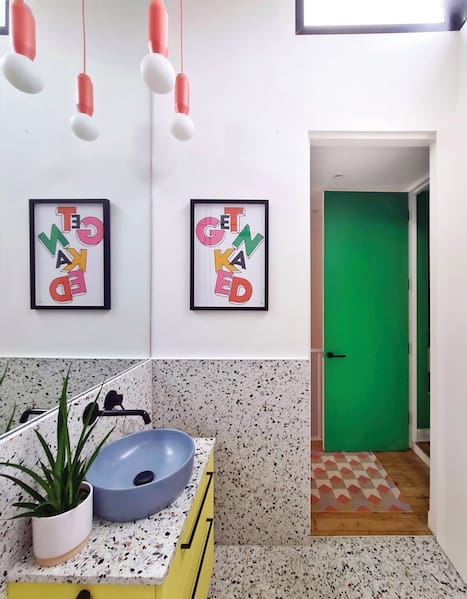