Luxury Pet Care is Worthy of Command to 'Stay' 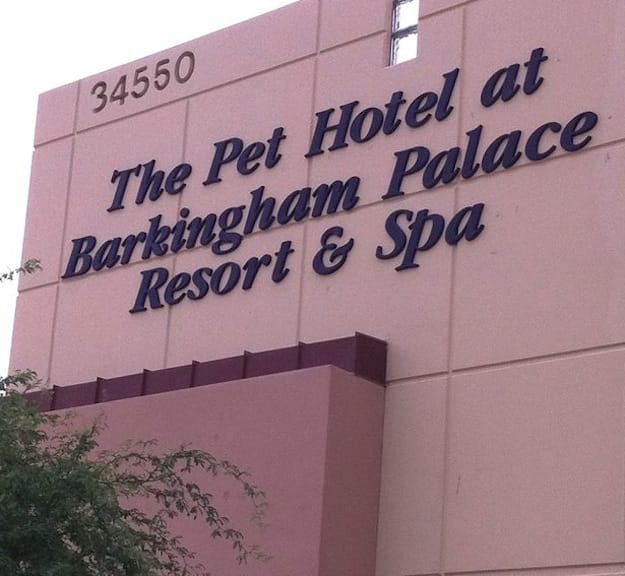 The recent addition to The Pet Hotel at Barkingham Palace is only part of what owner Lori Weiner envisions to be a full-fledged pet care center in Palm Desert.

The luxurious pet resort for dogs, cats and other family pets, which offers private suites with a twin bed and TV among a host of amenities including pilates, recently added three outdoor play areas and a swimming pool.

There are still open tracts of land around the main building, and Weiner’s next project is to add a veterinary clinic. Eventually, she wants that building to also house a pet sanctuary.

“We’ll have a few isolation rooms for when dogs need to recoup and recover,” Weiner said. “My idea is a real spa for dogs. A recovery spa.”

Ever since the pet hotel opened two years ago, it’s been full speed ahead. The building at 34-550 Spyder Circle, which sits off Dinah Shore Drive just east of Monterey Avenue off Interstate 10, receives significant drive-by traffic. However, the bulk of patrons come by word of mouth or from reading one of the five-star reviews on the website Yelp.

Weiner, whose background includes training and showing dogs at dog shows for more than 20 years, looks at each addition as a way to communicate the hotel as a second home to a customer’s pet.

“We’ve looked for things as if I was going to board my own dogs,” Weiner said. “That’s why I came up with the rooms and indoor parks – it has to be something they are most comfortable with. A dog knows if it’s having a good time or not. Most of the dogs barrel through the front door. If they don’t want to come, they know.”

Inside the main building on the first floor is an indoor play area, one designated for smaller dogs and two for larger ones. There are some day care and extended stay rooms on the first floor, but the majority is on the second floor including cat condos. Owners can keep an eye on their pets using web cam technology available in some of the suites.

Outside, there are three areas for play, including two designated for larger dogs. The fourth area contains a step down pool with waterspouts, and is available to dogs that board for daycare or an extended stay. The heated pool has a lifeguard, and there are attendants watching the outdoor play areas as well.

Weiner has someone at the hotel’s desk 24 hours a day, and a vet on call until the clinic is built.

“We had a guy who was taken to the hospital at 3 a.m. and he needed to have his dog brought in right then,” Weiner recalled. “It’s not our normal procedure, but he was a customer so we took his dog.”

View the video to see some of the pet hotel's amenities.