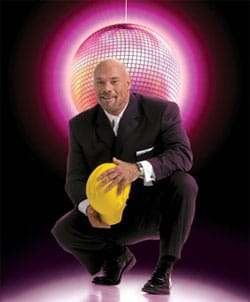 Mark Lee intended to become an architect after college, but he landed a gig in the early ’80s as a construction worker who sang disco songs and drew legions of fans nationwide. Now a Cathedral City resident, Lee shook his booty as a member of the Village People, whose hits included “Macho Man,” “In the Navy,” and the enduring gay anthem “YMCA.”

These days his soothing baritone voice syncopates piano rhythms within the serene confines of restaurants such as Bing Crosby’s or Spencer’s. Yet recollections of a more raucous performance career seldom stray far from his mind. An expression of wide-eyed amazement still illuminates his face as he remembers a night 25 years ago in Peru.

“We performed before an audience of over 50,000 in a soccer stadium,” he says. “I remember going out alone onto the stage in total darkness. The pin spot hit me, and a sound went up from the crowd that was almost scary. It was loud and frightening, but exciting at the same time. It was like something from the movies. I couldn’t believe this little kid from Sacramento was out there performing on that level. It was one of the true highlights of my life.”

In 1982, Lee replaced David Hodo as the construction worker in the Village People. The group — six men costumed as an Indian, cowboy, leather man, cop, soldier, and construction worker — had already soared to international prominence during the disco craze with their catchy tunes, especially the 1978 “YMCA.”

“When I joined them, the group hadn’t had a hit since ‘YMCA,’ and they were still riding on that last wave of popularity,” Lee says. “The first year, we had our own private limousines and first-class treatment. Then disco died; and all of us who were big sellers suffered equally, including Donna Summer. In the beginning, we stayed in great suites in huge hotels, and we ended in motels in places like Jersey. We started with our own band of 10 great musicians and ended up singing to little cassette tapes we would give to the deejay.

“The last year I performed with them, I remember driving out to the Jersey beach, in a freezing winter, to some little dive. There was this sign on the bar saying, ‘Coming soon, rock and roll oldies series.’ Aerosmith was booked the week after us to play the same little club. I remember thinking, ‘How did we get here from where we started?’”

Lee’s musical career began by accident. A child prodigy, he could play entire songs at the piano when he was 3 years old — with no formal training. But architecture was his first love.

“Since I was a little boy, I wanted to be an architect,” he says. “I grew up on a ranch in Rio Linda, outside Sacramento. Every time my dad brought home strawberry or orange crates, I would make houses out of them. But I was this miracle child at the piano. My parents would bring the neighbors over to see what their little boy could do. But my dad was very homophobic. He was a military fighter pilot and an extreme born-again Christian. He thought anyone who worked in the arts was really gay, and he didn’t want me to pursue it, so I was never given lessons.”

“I started architecture school at UCLA and got a part-time job as a gofer for an architect. He was an up-and-comer and his ex-lover was Mark Simon, vice president of Casablanca Records. Their label had all the disco artists, including Cher and the Village People. In 1980, Mark had an open house at his new home. I attended as part of the architectural firm. Everybody who was anybody was there — the girls from Sister Sledge, Sylvester, and Jacques Morali.

“When the pianist got done playing, I was asked to sit down at the piano and play. Sylvester came over and started singing. And then my boss said, ‘Let Mark sing.’ There was this tiny French guy, about 5’3" tall, sitting across the room who perked up when I started. He came right over and said, ‘Darling, would you like to be in the Village People?’ The man was Jacques Morali. For all practical purposes, he was the Village People.”

But it took two years and another series of chance meetings before Lee finally got a contract, flew to New York for three weeks of rehearsal, and began touring as the construction worker.

“I opened with the group at the Desert Sands in Las Vegas,” he says. “I was so scared. They wanted me to look and sound exactly like David [Hodo] so the fans wouldn’t notice the change. We played three weeks at the Desert Sands and then left directly for the Philippines for a month, then to Hong Kong. The group was huge in Japan and Australia. When we flew to Japan, thousands of people lined up along the runway to greet us, some of them dressed as Village People. It was weird for me because when the group first started, I hated them. And there I was a few years later, in this goofy outfit performing as one of them.”

But being a member of the group brought Lee into contact with a darker reality. Morali, who died of AIDS in 1991, quickly developed a sexual obsession with his newest protégé. Lee spurned his advances. Continual harassment from Morali is something Lee now refers to as “my greatest burden, the one I carried for years. It’s something I would have addressed had I not been so young and inexperienced. He really terrorized me.”

Yet Lee makes no pretense about the sexual escapades of the group, composed primarily of gay men except for the two lead singers, first Victor Willis and later Ray Simpson.

“There were always stage-door Johnnies sitting in the front row. One guy in the group would have his eye on someone, and that guy would have his eye on someone else. There were all these fights about who was going to get whom. The group never got along. We worked fine on stage, but there were major issues backstage. We were around each other every moment of the day, constantly performing and touring; and that’s enough to drive anyone crazy. Add in drinking, cocaine, and personal jealousy and, well, there were lots of fights. And some of them were fistfights.”

Along the way, Lee got to know many of the acts that opened for the Village People. “Joan Rivers opened for us at The Riviera in Las Vegas for years. I loved her. Everyone thinks she’s rude and mean, but she isn’t. She’s a really nice person, and she treats everyone fairly. She’s very real. When Joan left to host The Tonight Show, Debbie Reynolds replaced her as our opening act.

“And then there was this huge club in Miami called Casablanca that we played every three months. The Cubans loved us. One night this female singer opened for us with a song called ‘Lucky Star.’ She had black and blonde hair, and she was horrible. She wore one high-topped red tennis shoe, one black one, and she worked with these two really effeminate male dancers. We were all thinking, ‘What a wreck. This girl is never going to go anywhere.’ The girl’s name was Madonna. She was really egotistical and bitchy. It’s like she already knew what she was going to become. That drive was there.”

“[Studio 54 co-founders] Steve Rubell and Ian Schrager went to prison in 1980 for tax evasion, and the club reopened in 1981 under new ownership. But the glory days were a thing of the past. I remember singing on that bridge with all the white confetti in the air, knowing it was the end of an era. Tanya Tucker came to hang out with us before and after the show, then we all went out together and got really, really drunk.”

Lee performed one last time with the Village People in 1985 at the popular Los Angeles disco Studio One. After leaving the group, he returned to his first love: architecture.