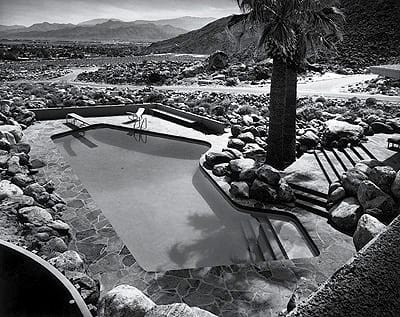 Smith submitted his proposal for transforming O’Donnell Golf Course into a district for interaction as part of Palm Springs Re-Imagined, a “fictional competition” initiated by the Palm Springs Preservation Foundation to elicit fresh ideas for downtown Palm Springs that incorporate historically significant structures.

“What I think is interesting about the Palm Springs Re-Imagined project is that its roots are in the question of how new architecture can mesh with the historical architecture,” Smith says. “For me, that question has an even deeper root, which is, ‘How do we preserve our identity as a city?’ That preservation of identity can occur through the preservation of historically and architecturally significant buildings, the design of new architecture that we will want to preserve 50 years from now, and intelligent design in terms of new developments, new architecture, and urban planning. We have architecturally significant buildings because Palm Springs was a place where an architect and a client could take a risk. In the 1940s, ’50s, and ’60s, there was an attitude of creating something that no one had ever seen before — and that attitude was welcomed.”

“In Europe, there were all these articles about [Richard Neutra’s] Kaufmann House,” Caussin says. Journalists would come here knowing only about the Kaufmann House; … but by the time they leave, they have discovered other [architectural gems]. French and Italian journalists came to take pictures for coffee-table books.”

Now in its eighth year, the Palm Springs Modernism Show “has grown exponentially,” Caussin says. “Every year, there’s something new, a new element, that makes the show bigger and better. For several years, we just had the show; it morphed into Modernism Week, and this year the new element is the City of Palm Springs becoming the presenting sponsor.”

Modernism Week (Feb. 15-24) — in its third year — also continues to grow, expanding the celebration of modernism beyond architecture, décor, and classic cars to fashion, music, and film. Representatives of the French consulate will be on hand with French-made documentaries on jazz musicians Duke Ellington and Oscar Peterson. Palm Springs Historical Society will present three films: the recent documentary on Smoke Tree Ranch, a 1959 chamber of commerce promo, and a 1936 film about Hollywood stars spending time in the desert. And as a one-time event, midcentury modern architect Donald Wexler will receive a star on the Palm Springs Walk of Stars.

“We try to make [the week] as varied as we can,” says William Kopelk, president of the preservation foundation and chair of the Modernism Week Committee. He notes it includes the one day a year that the iconic Frey House opens to the public. That and other added attractions give out-of-town visitors to the Modernism Show reasons to stick around.

And there are plenty of them. More than 3,000 people attended last year’s show. “We sold 400 tickets in the first 45 minutes of the show,” Caussin points out. He heard French, German, and Italian on the convention floor last year and spoke with some French people who annually travel to Los Angeles for business. One year, they also attended the Modernism Show. “They loved it so much, they based their business trip in L.A. on when the show was going to take place,” Caussin says.

Dolphin Promotions also presents modernism shows in Miami and Chicago and is adding shows this year in San Francisco (September) and Las Vegas (October). Of the three existing shows, Palm Springs’ is the most successful: “One, because we have the convention center exhibit hall that can accommodate more dealers; also the enthusiasm of the local people; and also Palm Springs being a resort,” Caussin says. “Attendance is growing, with people now coming from the East Coast and Europe. In the beginning, it was local people and people from L.A. Then it started attracting people from Portland, Denver, and Phoenix. Then it started radiating out.”

Palm Springs also has garnered the attention of the National Trust for Historic Preservation. Every year, the NTHP organizes two trips for the 100 members of its advisory council. In November, about 50 of them came to Palm Springs, where they enjoyed a reception at the Kaufmann house and toured other architecturally significant properties. The NTHP named Palm Springs to its 2006 list of America’s Dozen Distinctive Destinations.

“Palm Springs contains an astonishing wealth of architectural styles and building types reflective of the city’s 100-year history as a desert resort,” NTHP President Richard Moe says. “Palm Springs is not a city of architectural re-creations or approximations of previous eras. Instead, it is a remarkably intact and authentic expression of its architectural heritage.”

Things to do if You’re – MAD FOR MOD

Dining out in the desert means more than enjoying the cuisine of a rich variety of restaurants. For members of Palm Springs Art Museum’s Architecture and Design Council, it means supping in architecturally significant homes.

Enthusiast-oriented programs such as dinners, as well as lectures and an annual symposium, have attracted more than 300 members (some 300 memberships include dual memberships) in only five years.

Members are not only architects and designers, but also people who own modern homes and people who are passionate about architecture (including a businessman from Belgium who flies to the desert every year for the symposium).

Williams attributes the growth of the ADC in part to “the ability to really participate and see inside the homes, to be engaged with the homeowners and see the architecture, and to interact with the speakers at receptions [following their lectures].