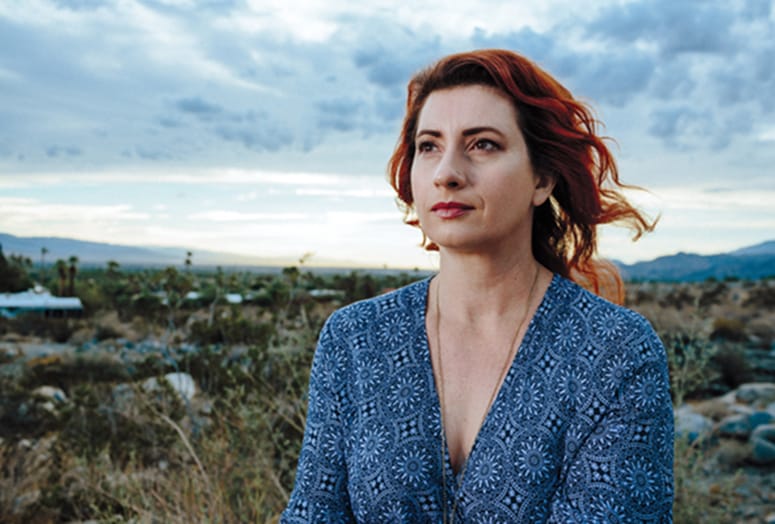 Palm Springs–based author and storytelling coach Maggie Downs left her backpack in Egypt to force herself to finish her trip after she returned home to Ohio for her mother’s funeral.
PHOTOGRAPHS BY NATE ABBOTT

After the monkey attack, Maggie Downs made her way from the Bolivian jungle to a hospital, the staff of which had no way to sterilize a needle for stitching her hand wounds. “Is that OK?” they asked her. “No!” she replied and ultimately tracked down a veterinarian who could do the job.

“Then I found a pharmacy and bought every antibiotic I could find,” she recalls. “I was able to get to an internet café and looked up which antibiotic was best for monkey bites.”

Downs’ yearlong backpacking trek transcends the standard pre-college trip through Europe — and not just because she hit 18 countries on three continents.

She had worked for a dozen or more years as a newspaper reporter, first in Cincinnati, and then in Palm Springs. She and her husband, Jason Yasuda, moved to California in 2005 so they could skydive year-round. He went to work teaching math; she got a job writing about such delights as cocktails and film festivals (“better than watching dead bodies get dredged from the Ohio River,” she says, referring to her previous job working the police beat at night).

VIDEO: Maggie Downs speaks about how the book impacted and what surprises came with it.

In 2010, while her mother was in the late stages of Alzheimer’s disease, Downs quit work to complete her mom’s informal bucket list.

“There were things we had talked about over the years — things she planned to do when she was older and never had the chance to do. I didn’t feel staying by her bedside at a nursing home in Ohio when she didn’t recognize me was the best way to honor her. So I decided to sell almost everything I owned and backpack around the world.” It had been the Alzheimer’s diagnosis that led Downs to take up skydiving (Yasuda was her instructor, which is how they met).

“I needed to change something, to actively do things with my life, because my mom didn’t. She put things off.”

After their honeymoon in Peru, Yasuda returned to California and Downs continued traveling, spending three months in Peru, Bolivia, and Argentina and five months exploring Africa before going to Asia.

She volunteered in part to integrate into communities and in part because it provided places to stay. In addition to the monkey sanctuary where one of the primates attacked her, she worked at an elephant sanctuary in Thailand and taught English to former prostitutes in Rwanda. 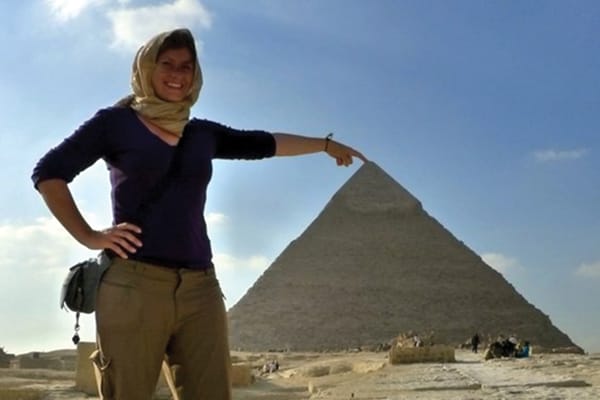 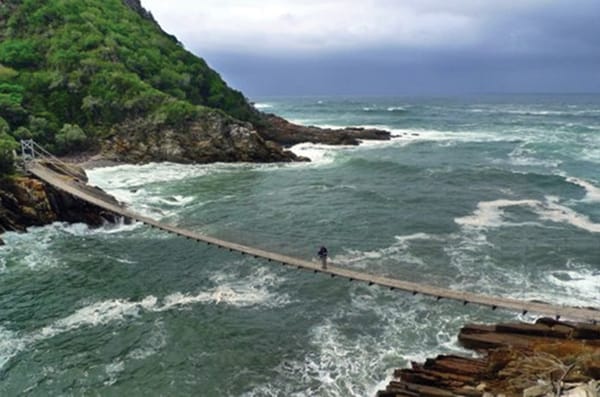 “I went to Uganda with the intention of working on a rice farm and ended up being a DJ at a country music radio station,” she adds.

She also relied on the website couchsurfing.com to find free lodging and sought transportation on overnight trains and buses.

Although she could not speak their language, nor they hers, Downs spent a couple of days with the women of a South African village whose men worked in diamond mines.

“I was getting a sunburn, so they painted mud on my face. They taught me how to carry water on my head, and we made food together. I showed them pictures of where I came from. We danced and played drums. It was a magical place. It was like Brigadoon — I would never go back because it was too perfect,” she says, even though they laughed at her dancing.

Halfway through the adventure, Yasuda and Downs met in Egypt, where they spent Christmas. Alone again, on New Year’s Day, Downs stayed in Giza at the home of a man she met on the street.

Shortly thereafter, her mother died. She flew back to Ohio for the funeral but left her backpack in Egypt “to force myself to continue [the trip],” she says. She landed in Cairo on the Arab Spring “Day of Rage.”

“A revolution makes quick friends,” she says, noting that she remains in touch with a heavy metal band she met during the week she was there before a Bedouin helped her get to Jordan. From there, she went to Ethiopia and India and then spent four months in Asia.

“Whenever you leave home, you put yourself in a vulnerable position, but I found that people are really generous and kind,” she says. “I met a family on a train in India who were so appalled that I was traveling solo that they pretty much adopted me and made me get off the train with them. They gave me a place to stay, brought me to their temple, showed me how to cook Indian meals, and gave me family recipes.” 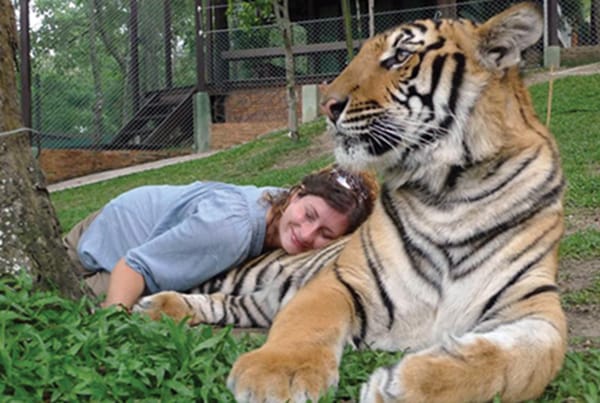 While in Kolkata on her first wedding anniversary, Downs ordered Indian food from Amazon and had it sent to her husband so they could “have dinner together.”

Throughout the trip, she Skyped with her husband, emailed friends, and wrote in a “sparse daily journal” and blog to keep track of things for herself. When she returned home, she decided she should write a book about her experience, especially as it ties to the Alzheimer’s that eventually killed her mother.

Downs has written and rewritten the bulk of Roam: The Trip of My Dying Mother’s Lifetime, due out in 2020 from Counterpoint Press.

“I have been writing different endings and nothing struck the right note until something that happened recently,” she says, keeping mum on the “something.”

In addition to finalizing her manuscript, she works as director of marketing for the University of California, Riverside in Palm Desert; co-hosts a book-themed radio show; writes for a variety of publications; coaches storytellers for public performances; and revels in being the mother of a 4-year-old boy whom she claims has unbridled imagination and perfect comic timing, and loves to climb on things (“I should have known, giving him a name like Everest”).

Although there is grief in Roam, Downs stresses that it also is filled with life and joy.

Tod Goldberg, who leads UCR Palm Desert’s MFA program (from which Downs graduated) and who collaborates with her on the radio show and storytelling coaching, has read her in-progress book and predicts she will be a “guru in the next phase of her life.”

When the book comes out, he predicts, “She will be that woman who takes other women traveling around.”

In addition to inspiring others, Downs wants to leave Everest a legacy: “I want him to know that his mother was creative and worked hard, wrote beautiful things, and left a mark in the world.”

She contests any suggestion that the experiences she had on her adventure would be impossible these days. “I still believe in the inherent good in people,” she says. “I believe the world is a kinder place than you see on the news.”