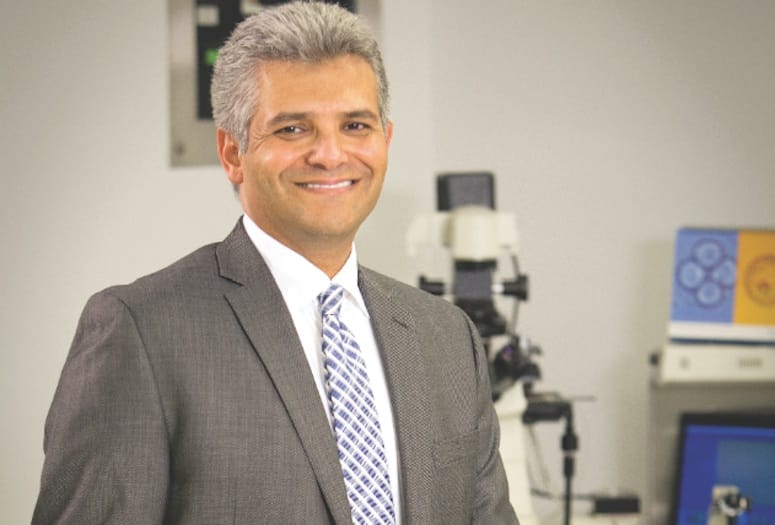 Maher Abdallah grew up watching his cousin perform surgery and practice primary care; by age 11, he knew medicine was his path.

After medical school at Syracuse, he chose to specialize in obstetrics and gynecology, partly for the chance to use his surgical skills. But after studying infertility, he says, “I realized that in addition to delivering babies, I wanted to help couples conceive. One of the best feelings I’ve had is announcing to a patient that she’s pregnant.”

Today, he heads the Coachella Valley’s first and only reproductive endocrinology center, open since 2010. It’s a full-service facility, offering everything from in vitro fertilization to surrogacy to robotic surgery, a technique few in his field perform.

Fascination with the science of endocrinology and hormones also drew him to the field. And with today’s advances, conception is only part of the story. Experts can biopsy to ensure an embryo is genetically normal; screen for gender; and even test for genetic disease. In the past two years, thanks to the center’s pioneering work, two healthy babies were born at Desert Regional Medical Center free of the gene for familial chronic pancreatitis, an inherited disease.

Abdallah is proud of his success rate: It’s nearly twice the national average for IVF deliveries. But the center’s local value is another asset he upholds. By offering in-house procedures to help couples keep costs down, “we’re doing whatever we can to provide the best care right here in the valley,” he says. “Patients don’t have to go to Los Angeles or San Diego or Loma Linda for these procedures anymore. In fact, things are changing. Now L.A. patients come to us.”

Not that he’s averse to travel: A big fan of boxing, Abdallah visits Los Angeles for matches and attended the Manny Pacquiao–Floyd Mayweather fight in May.

“That helps me relax,” he says. “Helping couples is one of the best jobs out there, but when it doesn’t work, it can be emotionally exhausting. So I cope by recovering on weekends and coming back Monday to try and help the next couple, hanging in there and giving every patient the best I can.”