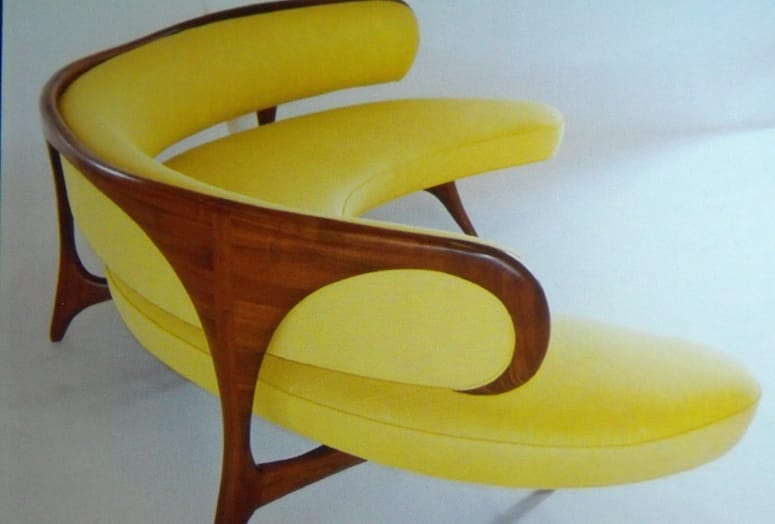 Vladimir Kagan’s chairs, sofas, and tables have found themselves in the homes of celebrities such as Angelina Jolie, Giorgio Arman, and Tommy Hilfiger, and earlier in his career with Marilyn Monroe and Gary Cooper.

Jolie sought out Kagan as a fan of his organic and sensual sofas, such as the serpentine sofa. “Angelina is a big client,” says Kagan.

She asked Kagan to produce several of his collection for her and requested miniature versions of some of his chairs for her children. “My ergonomic chairs are delicious to sit on,” he added. At 88, Kagan's work is as popular now as ever. Kagan was inducted into the Interior Designer Hall of Fame in 2009, and his latest offering is a book, The Complete Kagan: Vladimir Kagan, A Lifetime of Avant Garde Design, which he signed copies of following a Modernism Week talk before a near-capacity Annenberg Theater crowd on Valentine's Day.

The  spry and witty Kagan's unvarnished candor and disarming humor was clearly evident in his on-stage conversation with Michael Boodro, editor-in-chief of Elle Décor. Vladimir Kagan discusses one of his elegant chair designs with Michael Boodro, editor-in-chief of Elle Décor.

The German-born, New York-based furniture designer, who has been designing cutting-edge but timeless pieces for more than 60 years, wasted no time in declaring his aesthetic influence.

Then he veered toward true confessions. He stated he hewed to the Bauhaus philosophy that less is more. “But presently I’m about more is more,” he chuckled.

Kagan, who immigrated to the United States in 1938 and grew up in an artistic family, began his own creative journey as a painter and sculptor. His love of sculpture is evident in the organic forms of his furniture designs.