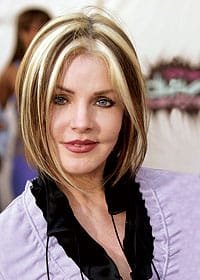 Priscilla Presley couldn’t have predicted the twists and turns her life has taken — couldn’t have imagined the places she’s seen, the people she’s met, or the lives she’s touched. Equal parts Greek tragedy and Shakespearean love story, Presley’s life has long existed beneath the microscope of fame — a view often too intense and painful for a woman who remembers well what it was like as a kid growing up.

“I used to gather up stray animals from around the neighborhood and bring them home,” Presley says. “My mother used to kick all of them — and me — right back out. I couldn’t have imagined that from there I would be here.”

Here, of course, is a place reserved in the pantheon of American culture — her name a singular thing to a generation brought up watching Elvis and Priscilla growing up together in the public eye, and then later through her genre-bending roles in Dallas and the The Naked Gun films, and on to her successful career as both a writer and business person.

Now 59, Presley continues to live a public life, though one of a decidedly cathartic and philanthropic nature through her involvement with Dream Foundation, the Santa Barbara-based wish-granting organization for terminally ill adults and their families. Founded by Palm Springs resident Thomas Rollerson in 1994 after the death of his partner, Timothy Scott Palmer, Dream Foundation grants thousands of dreams to adults devastated by terminal illness. Active with the foundation since 1997, Presley currently serves as its ambassador and celebrity spokesperson, advocating on behalf of the organization in an attempt to raise public awareness and funding so that no dream may go unfulfilled. For her work with Dream Foundation, Presley will be honored at the Rick Weiss Humanitarian Awards Gala on May 1 at Westin Mission Hills in Rancho Mirage.

“Helping to fulfill these wishes, to give someone hope, is very close to my heart,” Presley says. “It’s impossible not to take some of the emotions home with you when you see how they are affected by these simple wishes. Sometimes they want to have the wedding they never had, or they want to see someone special again, or they just want to see the ocean. To be in a position to help is very gratifying.”

Presley’s willingness to be in the public eye hasn’t always been so great — notoriously burnt by tabloid reports about her life, only recently has she been willing to open up in front of people about the struggles she, too, has faced. For over a year, she’s traveled the nation giving lectures to packed auditoriums touching on all aspects of her life. It wasn’t an easy decision to make.

“When I was first approached, I said no,” she says. “Discussing the past, going through all the memories again, it’s a painful thing for me to do and not something I thought I really wanted to do anymore. And getting up in front of a group like that … the idea made me very nervous. But then it occurred to me that I had something to share with other women: How to survive. How not to be a victim.”

And what she’s found, not surprisingly, is that people respond to her. Fame is the most fungible public trust — people are apt to associate a character a person plays with a member of their family, a benign presence that comes into their living room each Friday night at 10 p.m. that provides drama, or humor, or simple companionship. For Presley, this connection must at first ground her audience, placing them in a spot of familiarity that soon becomes a deeper, more emotional connection once she begins to delve into her life story. It is the hurdles she’s cleared in real life that tend to resonate with the generations who’ve come to hear her. “There are people in the audience who just know me from Dallas,” she says. “Others know me from the films I’ve done,   others from Elvis. And what I try to impart to each of them is the power of hope. It has been personally therapeutic.”

In addition to her speaking tour, Presley has also been active behind the scenes in two large-scale productions — a Broadway musical based on her life and a remake of the classic Peter Sellers film The Party, with Sex and the City creator Darren Star. But it is her work with the Dream Foundation that has become her benchmark.

“Priscilla is extremely intelligent,” Rollerson says of his foundation’s spokesperson and ambassador, “and she has a great grasp and understanding of the balance between emotional health and physical health. We have a lot of celebrity support — people will give money, more often they will show up at a public event — but Priscilla prefers to come to the planning and strategy meetings to do the hands-on work.  She would rather stay off the red carpet.”

What Dream Foundation lacks in continual funding — many of the wishes they grant come from in-kind donations — Presley makes up for with her willingness to take on the public face of the organization in an altruistic manner, Rollerson says. “She’s had plenty of opportunities to utilize her role with the Dream Foundation to further her own causes, but never has. When it comes to heart and humanity, she is truly selfless. When she shares herself with these families — and we get many, many requests to visit Graceland or simply to meet Priscilla — she truly defines beauty and grace. I believe that she sincerely cares about each person she comes into contact with.”

Maintaining emotional strength in the face of public scrutiny for the better part of a lifetime must have been hard, and Presley concedes as much. But controlling your emotions within the specter of a person’s final wish is something she has come to cherish. “You have to be there for the families,” she says. “When someone’s last wish is to meet me, I have to thank them for wanting me to be a part of their life. I’m so thankful every day for the life I’ve had; and to give a moment of it to someone else in need, I can’t think of a better thing.”