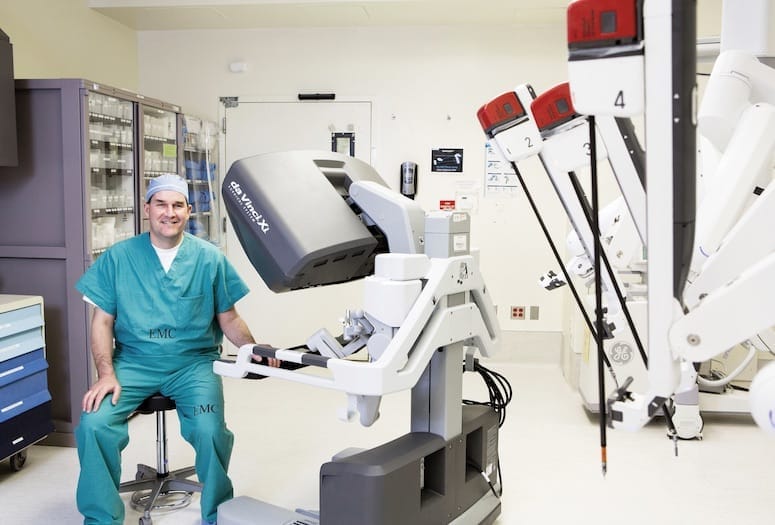 “I am driving,” says Scott Gering, M.D., “but I am harnessing the power of a computer.”

The word “robot” conjures up images of killing machines in comic books or of Isaac Asimov’s AIs whose positronic brains run amuck. Hollywood often saw the future differently, bestowing upon audiences the concept of benevolent robots capable of witty repartee.

In the 1956 film Forbidden Planet, ball-legged Robby — with reciprocating arms, flashing lights, and rings protruding from his torpedo-shaped head — uttered such niceties as “I am at your disposal” and prefaced “I am analyzing” with “Quiet please.”

The following decade, TV’s Lost in Space made up for not giving its ellipsoid-bubble-headed robot a name by bestowing it with human emotions and a mocking attitude. Rotating torso and flailing bellowed arms accompanied its most memorable and frequent warning: “Danger, Will Robinson! Danger!”

In 1977, Star Wars gave us the resemblance of an ambulatory Oscar statuette known by the awkward C-3PO designation and tending toward melodrama (“Oh dear!”).

Ten years later, Star Trek: The Next Generation introduced us to a pasty-skinned AI that could perform quicker-than-lightning calculations, play the violin, and paint.

The gap between our culture-classic concepts and what surgeons think of when they hear the word “robot” rivals generational divides of music and slang.

First, one must understand that the robots surgeons use bear no resemblance to humans in form and, more importantly, do not function independently. Working with them, surgeons remain in control at all times — aided by enhanced visuals and dexterous armatures.

Eisenhower Health doctors perform surgeries with two robotic systems: one for general surgeries (typically abdominal and digestive-tract operations) and the other for knee and hip replacements. Both record data for post-operative analytics.

The da Vinci robot bears a considerably loftier goal than tattooing the Mona Lisa on a person’s abdomen. Its triumvirate components include a surgeon console, a patient cart, and a vision cart.

The surgeon sits at the console, face pressed to a portal that displays 3-D, high-definition images — magnified 10 times — of the body parts involved. His hands operate master controls that maneuver the robotic arms on the patient cart.

The patient cart stands adjacent to the operating table. Three robotic arms extending from a center post hold articulated instruments with 360-degree range of motion. A fourth arm holds the camera that projects images on the console display.

The vision cart, looking something like a stack of stereo components topped by an LCD screen, serves as the integration hub. It provides communications between the da Vinci’s units and a live-feed view of the operation for human surgical assistants.

Eisenhower purchased its first da Vinci system in 2008 and its third last December, upgrading to the manufacturer’s latest technology along the way.

Bearing a name suggestive of a quick and tenacious shark, the Mako system also comprises three components. The bulk of the system resides in a wheel-based cart that captures a consumer-appliance style — its sleek white cabinetry wrapping around a shiny shell that protects the robot’s electronics.

The main distinction between the da Vinci and Mako robots, aside from the surgeries for which they are designed, is that the latter puts the robotic armature in the surgeon’s grip versus remote control.

The process also differs in that the Mako relies on the surgeon’s preoperative plan. A CT scan of the subject joint generates a 3-D model of the patient’s specific anatomy, which is loaded into software that gives the surgeon visual cues during the real-time operation.

Eisenhower purchased its first Mako robot in 2009, traded it in for an upgrade in 2018, and bought two more in 2020. One is housed at Eisenhower Desert Orthopedic Center.

The Robot Hall of Fame at Carnegie Mellon University in Pittsburgh, Penn., includes the following inductees: