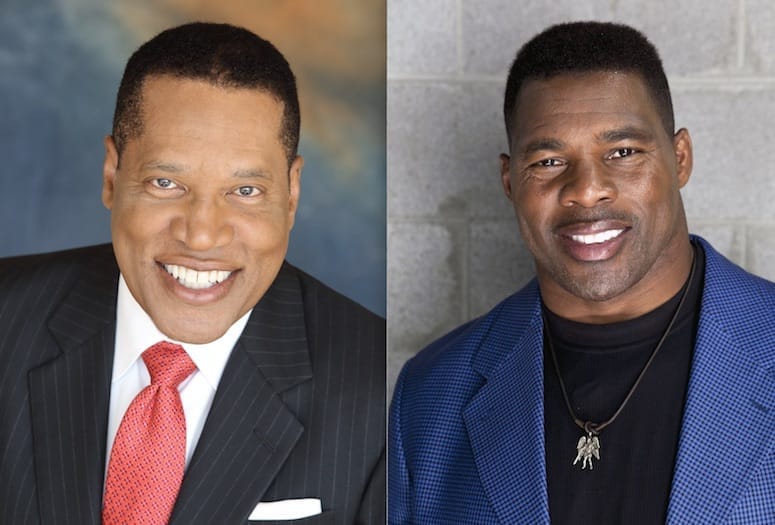 Larry Elder (left) and Herschel Walker will help raise funds for Mama’s House, the only residential home within the Coachella Valley providing shelter for women in crisis pregnancies.

Larry Elder, who has hosted the longest-running afternoon drive-time radio show in Los Angeles since 1994, and former NFL running back great Herschel Walker will both speak at Mama’s House’s eighth annual “Heartbeat of Love” luncheon on April 17 at Indian Wells Renaissance Resort and Spa. The event will run from 11 a.m. to 1:30 p.m..

Elder and Walker will also participate in a special reception and dinner on April 16 at a private location within the Coachella Valley for major donors.

Mama’s House is the only residential home within the Coachella Valley providing shelter for women in crisis pregnancies. Sponsorships are available, and include some admission to the VIP Reception on April 16. Sponsorships range from $750 to $60,000 for a premier sponsorship. Individual luncheon tickets are priced at $125 and available by calling 844-232-8622, ext. 700. For Sponsorship information, contact Jan Lupia at 760-406-3413 or 844-232-8622 ext. 1, or email her at janlupia@themamashouse.org.

Known as a “firebrand libertarian” according to Daily Variety, Elder is also an attorney, best-selling author, radio and TV talk show host, and executive producer of the highly-acclaimed documentary “Uncle Tom,” and the movie “Michael and Me.” The recipient of a star on the Hollywood Walk of Fame, Elder has hosted “The Larry Elder Show” is nationally syndicated for Salem Radio Networks.

Best known for his legendary sports career that began as a freshman at the University of Georgia, Walker earned consensus All-American honors three consecutive years in both football and track & field, set numerous NCAA and Southeastern Conference records, and capped a sensational college career by earning, in his junior year, the 1982 Heisman Trophy.

In 1983, Walker turned pro, giving up his final year of collegiate eligibility. Over a 15-year pro football career, he set the still standing, single-season, pro football rushing record of 2,411 yards, led the NFL in rushing, gained more total yards than anyone in pro football history, and received numerous all-pro and Pro Bowl honors.

Holding a world record in the 60-yard dash, Walker participated in the 1992 Winter Olympics 2-man U.S. Bobsled team. He is also an accomplished fifth degree Black Belt in Tae Kwon Do. In 2002, Walker was voted into the Collegiate Football Hall of Fame, and in 2015 was selected as the greatest player in college football in the last half-century.

Off the field, Walker is president and CEO of H. Walker Enterprises, LLC and Renaissance Man Food Services, LLC, a certified minority business enterprise established in 2002, providing poultry, pork, and bakery products to the food service and retail marketplace.