Man With The Plan 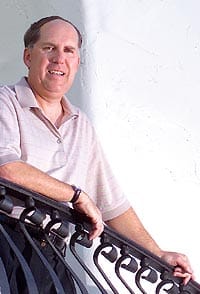 Though he builds multimillion-dollar luxury home, Wells Marvin believes that life’s simple things are best. When he and his wife, Karen, lived in Los Altos, they frequently strolled the neighboring village of Los Gatos, stopping for coffee or to buy ice cream for their two children. “Also, my office was there and I could walk to any number of restaurants or buy a paper,” Marvin says. “It’s a huge quality-of-life issue if you can work in a village rather than an office park. It’s much more humanizing.”

A search for such an environment in the desert inspired a commercial development — Old Town La Quinta, a complex of shops, services, and purveyors of food — in the city where he lives and works.

Actually, the genesis for Old Town La Quinta was a deal he struck with Karen in 1997. Marvin was spending his time between developments in Oregon and the desert, and Karen wanted him home more often. “I almost jokingly said we could move to La Quinta,” Marvin says. “She had three conditions: (1) I build her a nice home, (2) we spend more time in France in the summer, and (3) I build a village to have the same kind of lifestyle. The first two were easy. I’m just finishing the third condition. It took six to seven years for that.”

The son of a U.S. diplomat, Marvin was born in 1957 in Berlin, Germany. Although the family moved back to Washington, D.C., in 1960, they vacationed in Europe. “I always felt comfortable in Europe,” he says. “I have a real feel for European cafés and stores and buildings and always liked it there.”

Between the ages of 7 and 9, Marvin lived in Martinique, where he learned to speak French in a two-room schoolhouse. Then he returned to the upper middle class suburban neighborhoods of Bethesda, Md., but spent his senior year of high school in Ankara, Turkey. After Turkey, he enrolled at  University of Oregon and majored in political science with a plan to follow in his father’s footsteps.

“Eugene [Ore.] was too consciously aware of itself,” he says, and it was environmentally friendly and progressive in urban design. “That was where I got my teeth into development.” He literally learned from the ground up.  Between his freshman and sophomore years, he bought a lot and recruited a friend to help him build a duplex. The following summer, he hired friends to help him build two houses, which he sold for $55,000 and earned $10,000 profit on each. He started with $8,000 he inherited from his grandmother, an $8,000 loan from his father, and a $25,000 construction loan. And he reinvested all profits.

But Marvin’s interest in building really predates those heady college days. “When I was a kid, I built bookcases and tables,” he says. “I had a wood shop in the basement, but I never could convince my parents to let me build an addition to the house.”

Although Marvin passed the Foreign Service exam, he chose not to go into the State Department because he was doing so well building homes. However, in 1979, interest rates rose and the economy crashed. When things picked up again in 1981, he started a real estate company in Eugene with a former Oregon governor.

“But it was still a tough time, so in 1983 I moved to Los Gatos and joined a small company as executive vice president,” he says. For the next four years, he built mansions and built and remodeled apartment buildings. He also built Victorian replicas in Los Gatos’ Old Town. “That’s where the inspiration for Old Town La Quinta was born,” he says.

By age 30, Marvin was doing well for himself, but he wanted “bigger, more interesting deals” and decided to become a lawyer and get involved with developers as clients — maybe even become in-house council for a large development firm. He finished law school at Santa Clara University in 2 1/2 years, passed the bar, and went to work in construction real estate litigation in San Jose — but didn’t like it. “I realized my first love was not litigation, but to be the builder,” he says. Joining the building boom in Oregon, Marvin found five acres of land approved for 20 lots there, started Marvin Homes in the second bedroom of his house, got a toll-free telephone number, and put up signs on the lots while he was still at the law firm. Over the next five years, he developed 600 lots.

Marvin turned his attention south after buying a second home in the desert for vacations. He joined La Quinta Resort & Club and took up golf. “I started seeing this land at Citrus Golf Course [at PGA West], but wondered, ‘Can you live in paradise?’” He met with someone who had enough land to build 800,000 houses. At the rate of 110 homes a year, Marvin figured, it would take 73 years to develop. “I convinced him to sell me 17 acres at Citrus to help accelerate development,” he says. Between November 1997 (when he moved to the desert) and November 2000, he built 42 homes.

Marvin eschews suburban sprawl and wants to see a return to places where people can live, work, and shop within walking distance. He has attended and been a speaker at Urban Land Institute and National Association of Home Builders seminars on new urbanism — downtown infill projects and renovations.

“The Holy Grail is to do exactly what we are doing in Old Town La Quinta,” he says. “That’s why I was so struck when I first saw the site. I could see the potential.” Fortunately, he was able to convey his vision to 15 different investors.

Richard Ayer, a retired market and economic researcher in San Diego, invested with his two brothers — William, the CEO of Alaska Airlines in Seattle, and Donald, an appellate lawyer in Washington, D.C. — in four of Marvin’s local ventures. The quality of residential projects gave them the confidence to invest in Old Town La Quinta. With the growing local population and the tourism attraction of La Quinta, Ayer says, “it seemed like it was something that could be pretty darn useful to the area.”

Bruce Richards, a retired insurance executive from Seattle and part-time resident of PGA West, also invested in Old Town La Quinta. He met Marvin after the developer had purchased the land and was beginning to put it together. “I think it was the right idea at the right time, and I have a lot of confidence in him,” Richards says. Noting that Marvin is “a tough, honest competitor on the golf course, like he is in business,” Richards points to the quality of homes at The Citrus as indicative of a Marvin project.

Even Marvin’s 7-year-old son recognizes the quality. The youngster visited the project with his father during construction and asked, “Dad, Old Town is kind of like a craft for you, isn’t it?”

As for Karen Marvin, who grew up in Los Gatos and met her husband there in a conversational French club, Old Town represents the heart of the community. “When I was living in Los Altos and walking around with my children, I felt like I was in a Norman Rockwell painting,” she says. “That’s what we thought was missing here.”

Wells Marvin’s first transaction in Old Town solidifies the vision. While visiting Wishes Toy Store a few days after it was one of the first tenants to open for business, he saw the store’s first dollar tacked on the wall. “It just struck me as a defining moment,” he says. “It almost brought a tear to my eye. Then I just laughed out loud when [the owner] told me it was from my 7-year-old son, who bought a toy car with tooth fairy money. What a small town — the cash came out of my own pocket!”