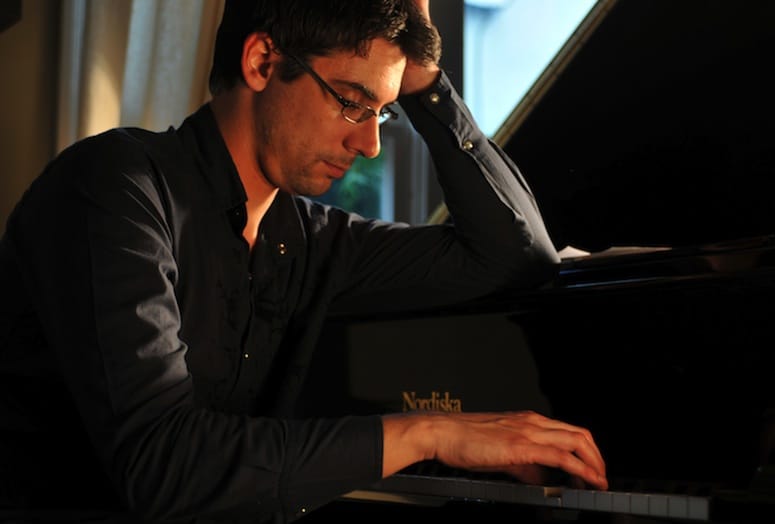 Pianist Josh Nelson is part of the Summer Jazz Series this weekend at the Coachella Valley Repertory Theatre.
PHOTO BY MATTHEW CORY

The American jazz recording artist and arranger lists anything with Barbara Stanwyck, Lawrence Olivier, and Ida Lupino among his faves, and the work of directors John Ford, Alfred Hitchcock, and Billy Wilder.

Known for his uniquely modern music and compositions, Nelson says he is also a frustrated film composer at heart.

“I’ve done some stuff for short films, commercials,” Nelson says. “I would love to create a score with a larger orchestra on a film. That would be pretty cool. I’ve never done that.”

PHOTOS BY JONATHAN ELLIS
Josh Nelson, who recently got married in Palm Springs, will be back to perform July 22 at the Coachella Valley Repertory Theatre in Rancho Mirage.

While he hasn’t quite had an opportunity to score a major film, this gifted pianist and composer has been working on creating new music for “The Discovery Project”, a multi-media collaboration marrying music to nostalgic film, about the past, present, and future of Los Angeles.

“It’s a fun, multi-media idea with original modern jazz incorporating a visual component,” he says. “My album, Discoveries, is a stand alone album but it is, also, part of ‘The Discovery Project’ as well.”

The album is an exploration and honors the works by sci-fi heroes Jules Verne, Nicola Tesla, and H.G. Wells. “I love sci-fi (movies)…quality and really sub-par. It’s fun to see how directors thought their visions would come across,” he says.

Nelson, who grew up in Southern California, recently got married in Palm Springs at the Del Marcos Hotel. He will return to the desert to appear at the Coachella Valley Repertory’s Summer Jazz Series at 7 p.m. July 22.

The series begins July 21 with jazz guitarist Peter Sprague and vocalist Leonard Patton, and closes at 7 p.m. July 23 with Carl Saunders & His Quartet.

“I’ll talk about some films and classic film themes because I can’t resist,” Nelson says. “It will be an eclectic mix to entertain the Palm Springs folk.”

“I relate to the midcentury feel and I’m attracted and inspired by it,” Nelson adds of Greater Palm Springs. “The colors of the desert, the history of music, the people that live there and, of course, the famous stars and awesome homes.”

Nelson comes from a creative family starting with his father, who worked for Disney, and his mother, who was involved in community theatre.

“I played piano for musical theater shows and that got me excited to collaborate with people…my grandfather was a classical pianist,” Nelson says. “He was a doctor in Long Beach but he introduced me to music…Andre Previn, Leonard Bernstein. He died when I was 14 but his influence, definitely, rubbed off.”