The former home of Hugh Hefner and Roger Moore, Villa Grigio is a quintessential tribute to the Rat Pack era. Martyn Bullard Lawrence first purchased it as a weekend getaway.
VILLA GRIGIO PHOTOGRAPH BY DOUGLAS FRIEDMAN

Then there are his 327,000 Instagram followers and 48 Architectural Digest covers — including the annual Celebrities at Home issue featuring his designs for Kourtney and Khloe Kardashian that became one of the publication’s best-selling issues, ever. He has a home décor deal with Frontgate, a line of fabric for Schumacher, wallpaper for Cole & Son, tiles for Ann Sachs, rugs for The Rug Store, dinnerware for Haviland Limoges, crystal for Daum, window treatments for The Shade Store, outdoor furniture for Harbour, fabrics for Perennials, lighting for Corbett Lighting, and a collection of ranges for the revered French brand La Cornue, as well as collaborations with silver maker Christofle. There’s also the television appearances on Million Dollar Decorators, the cameo on The Young and the Restless, and the guest spot on RuPaul’s Drag Race (judging, not running). Add it up, and you’ll understand why Martyn Lawrence Bullard has earned his place among the pantheon of design icons.

Beyond his licensing deals, contagious enthusiasm, robust laugh, salt-and-pepper hair, and English-accented voice that instills confidence in his clients, perhaps the most intriguing thing about Bullard is how it all came to be. Like one of the three princes of Serendip in the Persian fairytales who traveled the world discovering things they were not looking for, serendipity has shaped his career in profound ways. And so has luck, which he acknowledges has played “an extraordinary part” in his success. 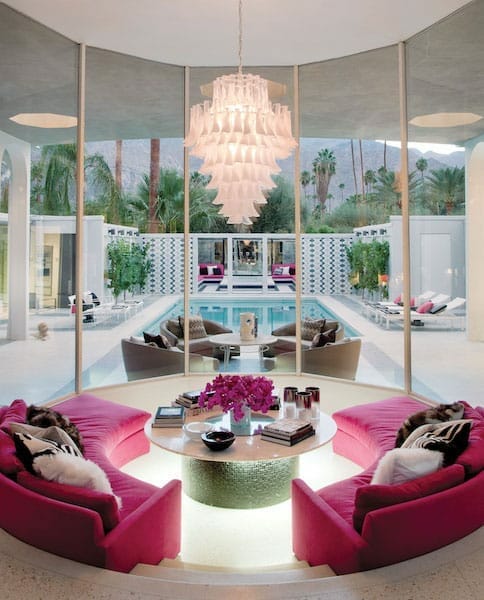 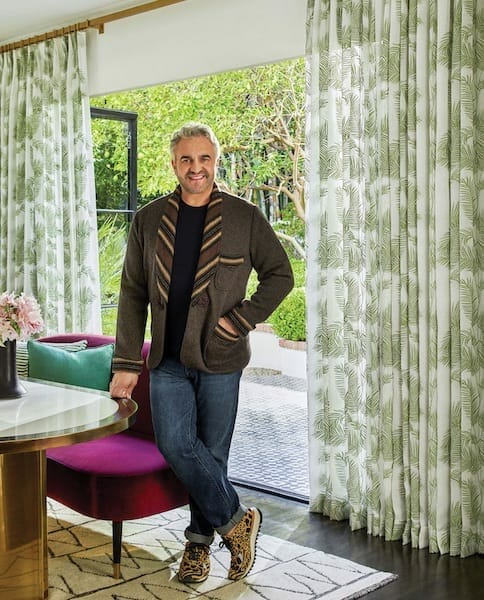 Born in 1967 in Southeast London, Bullard had an early thirst for buying and selling things. In 1978, when most 12-year-olds were squandering their allowances playing Space Invaders, he spent his at junk shops and flea markets buying what he calls “oddments” — little silver dishes, a small bronze Sphinx — things that he could easily transport. His father, an actor and opera singer turned businessman, supported his son’s passion and rented a stall for him at the Greenwich Antique Market. On Saturday mornings, the younger Bullard would set up his wares and sell them at a profit, mostly to American tourists. “It taught me how to put two good-looking things together and make them even more beautiful and desirable,” he says. “That was the greatest tool in my box going forward to become an interior designer.”

One of his customers was Toby Weaver, vice president of design for Ralph Lauren, who commissioned Bullard to find old trunks, hatboxes, and hunting garb that he could use as props in retail stores and window displays. With the money he was making, Bullard put himself through a summer season at the Royal Academy of Dramatic Arts before joining Lee Strasberg in London. By the time he was 21, he decided to move to Hollywood to become an actor (think Joaquin Phoenix meets Jude Law) or a pop star. As with so many other hopefuls, stardom was elusive, and he wound up working in a coffee shop. That didn’t last: He was busy flirting with a customer and blew up the cappuccino machine. Returning to what he knew and loved, he rented stalls at the Rose Bowl Flea Market and the Santa Monica Airport Antique Market. 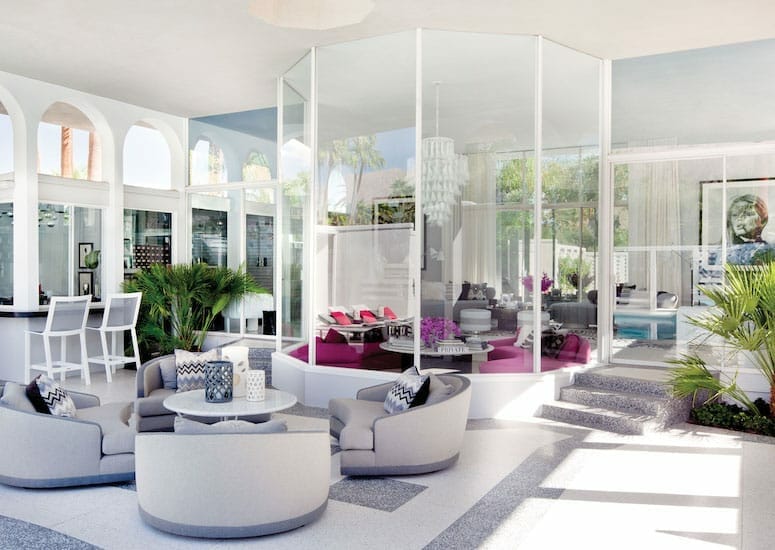 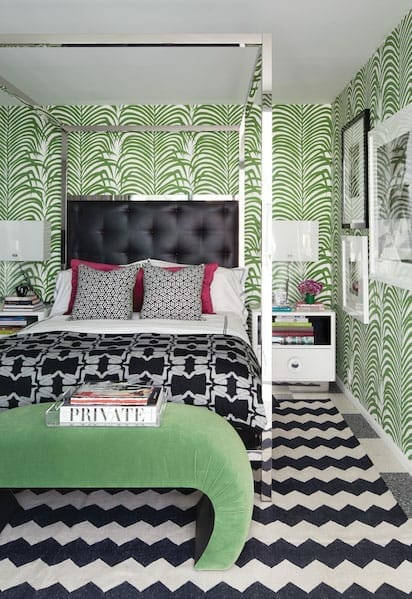 During that period, he landed a part as Eartha Kitts’ boytoy in the 1997 comedy-thriller I Woke Up Early the Day I Died. When production wrapped, Bullard invited Victor Ginzburg, a producer he met through the film, to his house, which he had decorated on a shoestring budget with flea market finds. Ginzburg flipped for it and asked him to decorate his 5,000-square-foot offices. Thinking the assignment might lead to other movie parts, Bullard accepted the job. Armed with a $30,000 budget, he created an exotic Casablanca-meets-Indian marketplace atmosphere.

Here’s where the serendipity comes into play: Shortly after completing the job, Bullard received a call from Liz Heller, executive vice president of Capitol Records, who had seen Ginzburg’s office and wanted him to decorate her office. Hoping he could parlay the assignment into a recording contract, he accepted the job. The two became fast friends; in fact, Heller now manages Bullard’s career. After he decorated her office, she hired him to design her wedding, at which he was seated next to Cheryl Tiegs. Tiegs, the first American supermodel, had recently purchased a house in Bel Air, and although she had interviewed all the top decorators in town, something about Bullard’s “fresh and slightly not-knowing-what-he-was-doing vibe” resonated with her.

He worked closely with her to design a fantasy-filled Balinese pavilion. The fact that neither had been to Bali didn’t matter. Bullard says, “Sometimes in design it’s more about the dream, the ideal, the complete fantasy of a look that will inspire you much more than the actual place.”

Before he knew it, he was designing homes for Sigourney Weaver, Christina Aguilera, Rebecca Romijn and John Stamos, and Edward Norton. Those assignments led to others, including multiple homes and a Las Vegas dressing room for Cher, residences for Tommy Hilfiger, the Osbornes, and members of the Kardashian/Jenner clan. The list goes on and on, including current clients Ellen Pompeo and RuPaul. 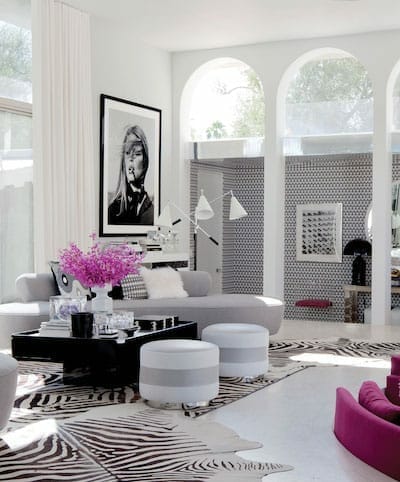 Along with the celebrity clients came the attendant press, including a Los Angeles Times article that caught the eye of L.A.-based PRG Hospitality Group. In 2004, the company gave Bullard his first hospitality assignment: decorating their recently acquired Colony Palms Hotel and its Purple Palm restaurant in Palm Springs. Thrilled with the results, they hired him to design three additional hotels: Casa Laguna in Laguna Beach, Sands Hotel & Spa in Indian Wells, and The Prospect Hollywood in Los Angeles.

“Martyn brings a sense of imagination to a space that we could never dream of,” says PRG co-founder David Dittmer. “He’s a glamorous mad scientist of design.”

While new owners redecorated The Colony Palms in 2020, residents and visitors still experience Bullard’s handiwork at Sands Hotel & Spa and its Pink Cabana restaurant. “When you go to The Sands, you feel like you’re in Marrakesh,” Dittmer says of the designer’s wizardry. “He’s pulling from a desert landscape and theme, but he’s pulling from a desert in another part of the world.” 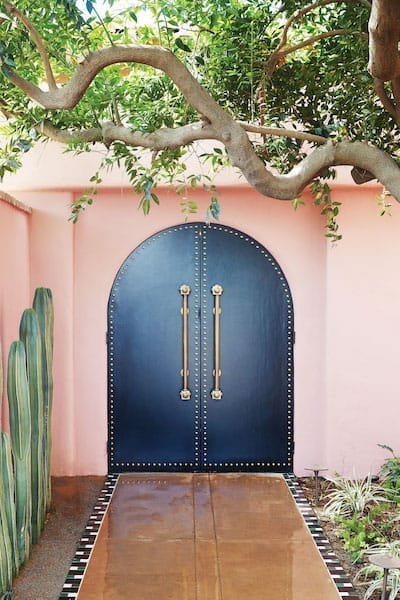 But it is the California desert that holds a special place in Bullard’s heart. He chose Palm Springs instead of Malibu (“Too many clients, too much like work”) for his weekend getaway in 2014, purchasing Villa Grigio, one of architect James McNaughton’s masterworks. Having earned its swinging-’60s pedigree as the former home of both Hugh Hefner and Roger Moore, the midcentury-meets-Hollywood regency house with its Lincoln Center-like colonnade is not only listed as a historical and cultural monument, but also a quintessential tribute to the Rat Pack era with the changes initiated by Bullard and his partner of 15 years, Michael Green.

“There’s something magical about being in the desert,” Bullard says, describing its allure. “When I’m on [Interstate] 10 and suddenly get close to the mountains and [Highway] 111, something comes over me and I feel really relaxed.” 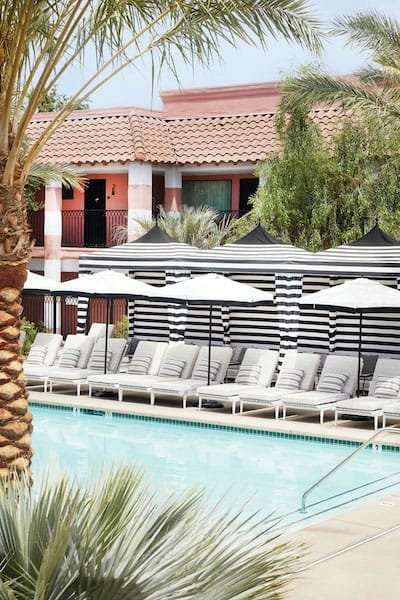 With new assignments in Thunderbird Country Club and the Indian Canyons neighborhood, as well as the possibility of another hotel project, time will tell how long he can retain that Zen-like feeling. But he’s done it before — and not only with the renovation of his own desert home. Bullard recently decorated the La Quinta residence of Cindy Crawford and Rande Gerber.

“I just love Martyn,” Crawford says. “He’s fun and inspiring to be around. As a designer, he’s so talented and also versatile. I’ve seen him do so many different styles that we knew he could help us with our project. He’s great at listening to what his clients want and then taking that original inspiration and bringing it to life — and of course, throwing in that little extra sense of whimsy or fun. Martyn helped add some old-school Palm Springs glamour vibes to our home.” 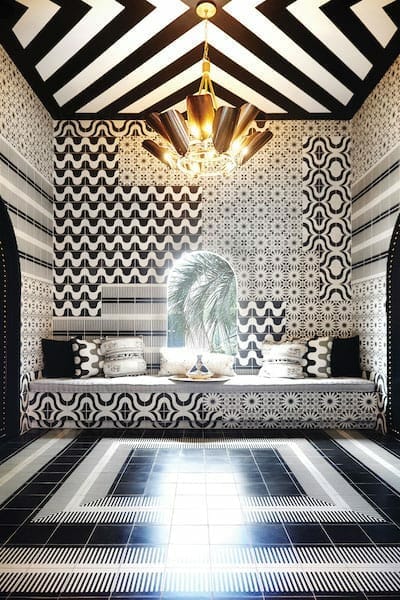 SANDS HOTEL PHOTOGRAPHY BY JAIME KOWAL
Sands Hotel & Spa has become one of the most Instagrammable locations in California. 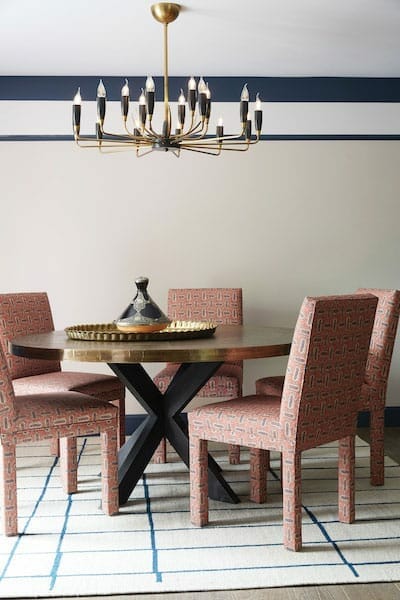 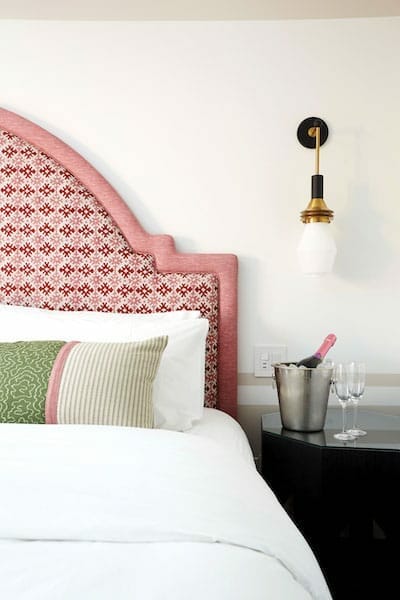 “I ask clients what they like and don’t like about their present home, where they go on vacation, what’s their favorite hotel. When you ask questions like that, eventually things come up. Their favorite hotel might not be because it’s by the ocean; it may be because it has a medium-firm mattress. The things that come out of these questions can help you create the jigsaw puzzle that ends up becoming a picture of their home, and you wind up getting exactly what the client wants because it’s part of their fantasy. It’s an amazing journey.”

Not unlike his own.