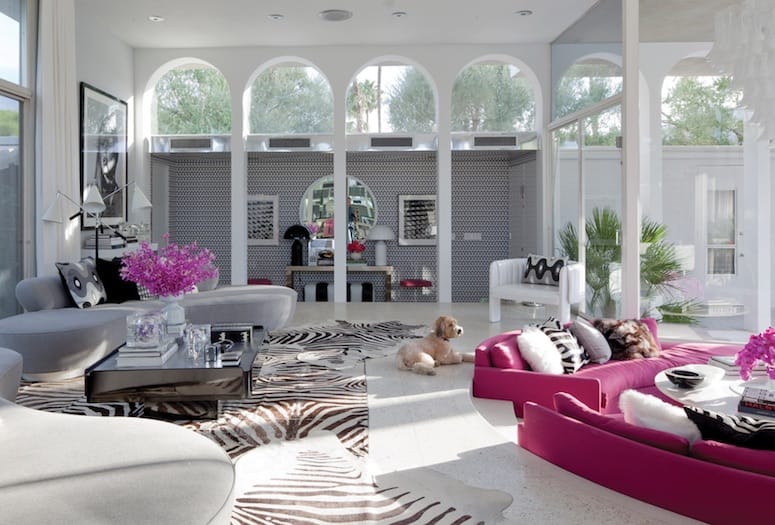 Harnessing his background in fashion — he was once creative director of Halston and has had his own couture and ready-to-wear lines — Bradley Bayou brought timeless style to his Palm Springs retreat.

He purchased the 3,500-square-foot Old Las Palmas home, first owned by Bob Hope, in 2000, when it was “in desperate need of work.” He replaced windows and doors with more energy-efficient glass, sunk the living room to create “a great space to retreat when you’ve had a bit too much sun,” and, most dramatically, opened the back of the house to embrace the views of the San Jacinto Mountains.

Desert colors dominate the interiors, showcased on pieces that display a wide range of texture, from rough rope armchairs to velvety sofas. Irregular flagstone floors used throughout the home and patio blur the line between indoors and out. 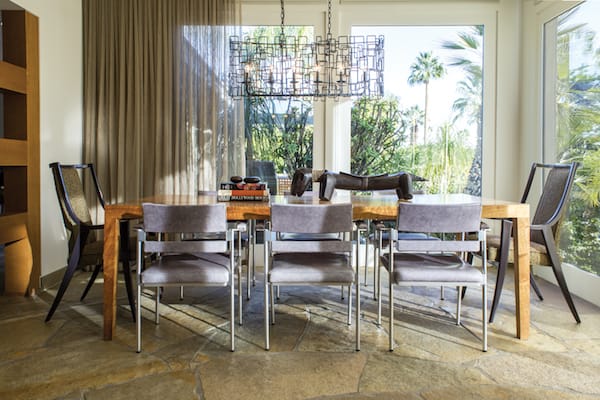 In the dining room, a Paul Evans chandelier hangs above a custom koa wood table.

Bayou’s work is globally inspired, as can be seen in his new range of pillows, which incorporate traditional Congan, Indonesian, Japanese, and Turkish fabrics with decorative themes. “I have an in-depth understanding of fabric,” he says. “How it will tailor, move in the breeze, and even how it will wear.” The pillows are on full display in the sitting and reading rooms, adding an approachable, understated sense of luxury. 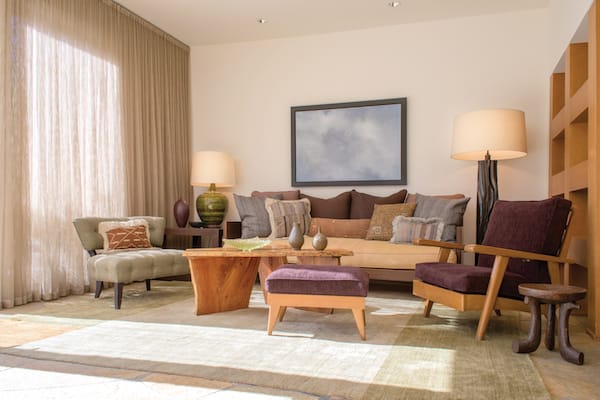 The sitting room has a slipper chair by Billy Haines and a floor lamp by Robert Kuo. The rest of the furniture pieces are vintage finds. The pillows are from Bayou’s line, and the artwork is from the Cause & Effect series by Joe Goode.

Indeed, the home is all about comfortable sophistication. “My home in Los Angeles is a bit dressier and more refined,” he says. “In Palm Springs, I want everything to look great, but I also want my guests to be able to put their feet up and not worry about a damp bathing suit ruining a chair.”

That ease enables a free flow of creative thought for this multifaceted designer. “I come here to relax, but it’s also where I come to focus,” he says. “Some of my best design collections — fashion, interior design, and now pillows — were born here. I’ll take my design team, and we will lock ourselves away in my house and just let the creativity flow. A week later we will have the basis for an entire collection.” 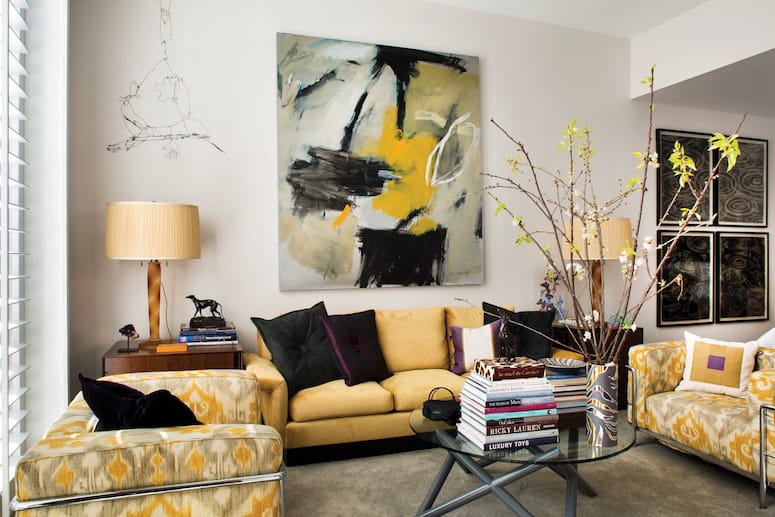 For Patrick Dragonette, designer and owner of the celebrated L.A. midcentury furnishings gallery Dragonette Ltd., generous rooms and ease of maintenance were key considerations for his weekend getaway with partner Charles Tucker.

Although he’s a fan of Palm Springs and midcentury architecture, “because I’m not in the million-dollar-plus category, I couldn’t afford the kind of space I wanted,” Dragonette says. Thus the decision to buy in Palm Desert’s Marrakesh Country Club, with gracious pink villas designed in the 1960s and ’70s by Hollywood regency architect John Elgin Woolf. “Everyone from Palm Springs thinks they need a passport,” Dragonette jokes.

The couple bought the home in 2014. “We were able to make it luxe and beautiful and chic but also very easy to maintain.” Case in point: the installation of Italian porcelain floors, as opposed to marble, which are not only less expensive but simple to clean with vinegar and water.

Dragonette is a collector extraordinaire whose La Cienega Design District shop is a trove of items by the likes of Billy Haines, Paul McCobb, and Tommi Parzinger. The desert home reflects this — it’s “very collected,” he notes. It’s also very high-low. In the master, for example, you’ll find $25,000 dressers designed by Haines and a chest by Maison Jansen alongside a bed from Restoration Hardware. “To me that’s a lot more interesting and challenging than just having unlimited resources,” Dragonette explains. 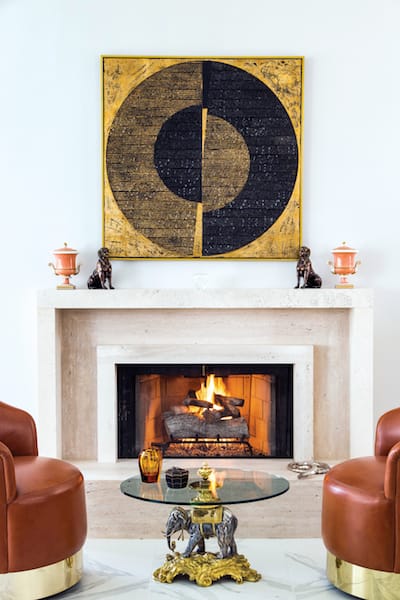 Equinoctial  by Huang Gang  and a snake by Emilia Castillo enliven the fireplace. The table was made from part of a 19th-century clock. The swiveling chairs are vintage J. Robert Scott.

In the desert, he says, there’s “less stress.” He tries not to work but often finds himself at Misty’s Consignments in Rancho Mirage, shopping for his store and for clients. It’s not so different from L.A., where he spends most of his time at the gallery, which is just five blocks from home, a “Moroccan fantasy” once owned by Tony Duquette.

In both L.A. and Palm Desert, Dragonette brings home pieces off the gallery floor — though he makes an effort to restrain his decorating habit, never adding anything new without pulling something out. “I love objects,” he admits. “I have this philosophy that certain things were just waiting for the right place, for me to place them.”

“We were able to make it luxe and beautiful and chic but also very easy to maintain.” Patrick Dragonette 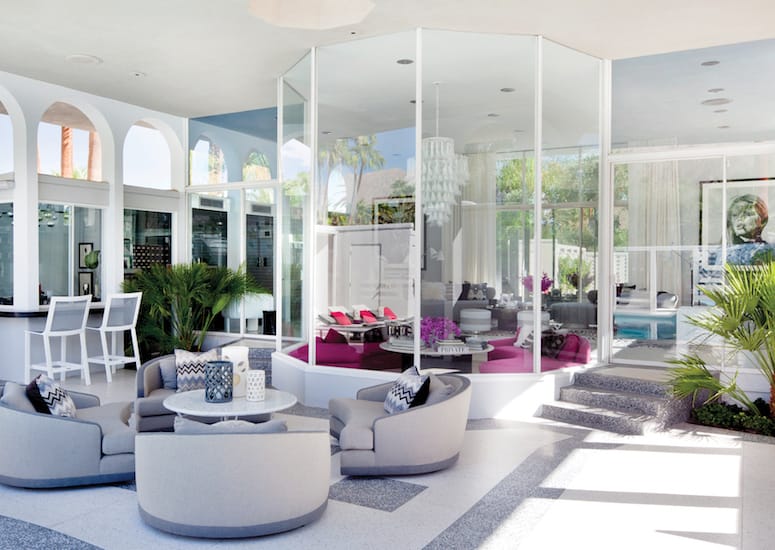 The outdoor sitting area has chairs from MLB Atelier upholstered in fabric from the Martyn Lawrence Bullard for Perennials collection. The terrazzo flooring  is by Wausau Tile.

“It’s my escape, it’s my sanctuary, it’s my fun place,” Martyn Lawrence Bullard says of his Palm Springs home in the historic Movie Colony neighborhood. The key word being “fun” — apt for a house that has been owned by the likes of Roger Moore and Hugh Hefner. “It was always designed with parties in mind. We’ve had quite a few,” Bullard laughs.

Built in 1963 by set designer James McNaughton, the house — a singular blend of modern, Moroccan, and Hollywood glam influences — spoke to the designer immediately. “I saw a picture, and I thought, Oh my god, it is so fabulous. I called my broker and said, ‘I really need to see this.’ I went in and bought it with a five-minute trip. It was crazy. I just had to have it.”

He was particularly drawn to the conversation pit, which “immediately brings you to the golden era of the cocktail lounge.”

Bullard restored the house, maintaining the original terrazzo floors inside and accenting the clean black, white, and gray palette with wild pops of color. “I used a very hot pink and a wonderful bright green — two colors that to me are very indigenous to Palm Springs. They speak to me of the fun, affable nature of the place.” 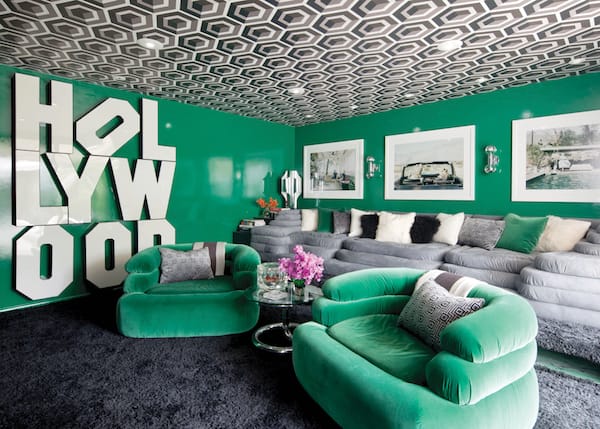 It’s a dramatically different vibe from L.A., where he lives in a 1920s Spanish colonial revival decorated with 18th-century Italian antiques — a place that, he says, is “more about my work and my day-to-day life.” In contrast, the Palm Springs home is “very relaxed. I love going after a crazy week. We’ll drive down late Friday night and just completely chill out.”

But Bullard doesn’t entirely escape work while in the desert. He recently finished a major project, the new Sands Hotel & Spa in Indian Wells — a confection of pink and Moroccan tile — and has other commissions in the area.

“I went in and bought it with a five-minute trip. It was crazy. I just had to have it.”Martyn Lawrence Bullard

Meanwhile, elements of his desert designs might find their way into his projects elsewhere. “I honestly think that the Palm Springs style — the wonderful midcentury-meets-playhouse — is a style that the world is grasping onto. We know from the popularity of Modernism Week that the eyes of the world are on the city.”