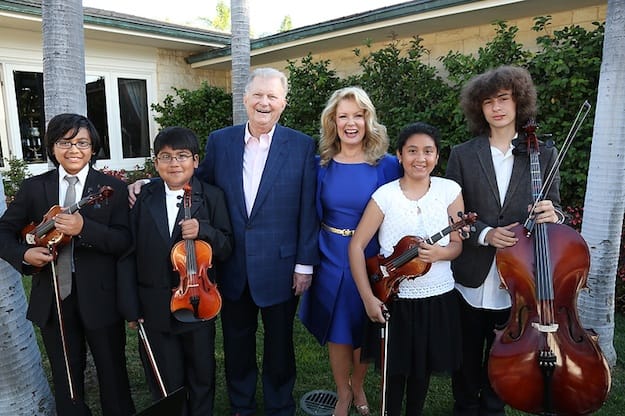 The couple first came in contact with the organization a year ago at another Classics for Kids event in Montana.

“I wanted to share this beautiful experience with my friends and community in Beverly Hills because Burt and I loved how the organization helps children know, learn, and love the language of music,” Hart said.

Classics for Kids Foundation is a national non-profit organization that provides matching grants to bring music programs and string instruments to at-risk youth.

“We started Classics for Kids to change the lives of at-risk youth around the country by opening the doors of classical music to them,” said Mike Reynolds, Classics for Kids founder and executive director. “I’m thrilled to be able to bring this opportunity to kids in Southern California.”

Funds from the Beverly Hills event will support the Harmony Project, an award-winning non-profit organization that has helped thousands of at-risk youth in underserved communities through music and other string programs in Southern California.

“The Harmony Project is honored to partner with Classics for Kids in providing quality music instruction to youth in Los Angeles who would not otherwise have access to it, widening the gap between what is and isn't available to youth in this city,” said Myka Miller, executive director. “Most music programs have been cut, leaving already underserved communities with few options for after-school activities, when kids are most at risk.”

They enjoyed musical performances by former Secretary of State Condoleezza Rice and the Muir String Quartet. Kids from the Harmony Project also performed for guests.

“Classics for Kids fills a critical void for schools — the ability to provide children with high quality instruments to aid in their instruction and enjoyment of music,” Dr. Rice said. “The study of music is not, to my mind, an ‘extracurricular activity.’ It’s at the core of educating our children broadly; giving them the confidence to take on difficult challenges and the opportunity to gain a talent that can be with them for a lifetime. Classics for Kids is a great partner for the schools in this important work.”

Classics for Kids Foundation was co-founded in 1998 by Dr. Rice and Muir Quartet (in Residence at Boston University) cellist Michael Reynolds in response to decline of music education programs in public schools. Since then, the organization has supported more than 100 matching grants in communities across the nation, with instrument values of more than $1 million.